Millions of Climate Refugees Have Already Lost Their Homes. TIL that it would/does cost the US government less money to provide homes to the homeless than it does to leave them on the street. : todayilearned. Source of Income - The Equal Rights Center. ERC Releases 2013 Source Of Income Report In April, the ERC relased it's latest source of income discrimination report, "Will You Take My Voucher? 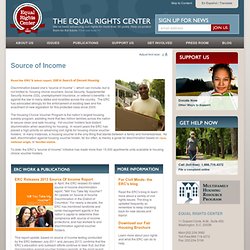 An Update on Source of Income Discrimination in the District of Columbia. " For nearly a decade, the ERC has monitored landlords and rental management agents in the nation’s capital to determine their compliance with source of income protections, and has worked to end discrimination against voucher holders. This report update, based on source of income testing conducted by the ERC between July 2011 and January 2013, confirms that the ERC’s education and outreach efforts continue to bear fruit, but that discrimination against voucher holders persists.

In the most recent testing, voucher holders were subject to discrimination 28% of the time. Click here to download a PDF of the report. The 1% wants to ban sleeping in cars – because it hurts their 'quality of life' Across the United States, many local governments are responding to skyrocketing levels of inequality and the now decades-long crisis of homelessness among the very poor ... by passing laws making it a crime to sleep in a parked car. 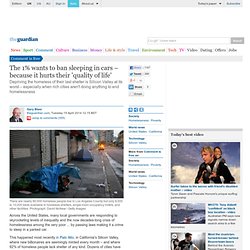 This happened most recently in Palo Alto, in California's Silicon Valley, where new billionaires are seemingly minted every month – and where 92% of homeless people lack shelter of any kind. Dozens of cities have passed similar anti-homeless laws. The largest of them is Los Angeles, the longtime unofficial "homeless capital of America", where lawyers are currently defending a similar vehicle-sleeping law before a skeptical federal appellate court. Laws against sleeping on sidewalks or in cars are called "quality of life" laws. But they certainly don't protect the quality of life of the poor.

To be sure, people living in cars cannot be the best neighbors. The paths from eviction to homelessness follow familiar patterns. Syrian Refugee Crisis. The Kids off the Grid...The Most Vulnerable Unreported Missing. For "The Kids Off the Grid™ ," the answer to that question is their reality. 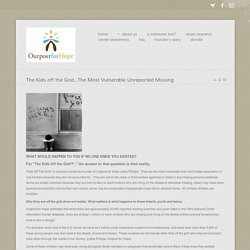 "Kids Off The Grid" is a phrase coined by founder of Outpost for Hope Libba Phillips. They are the most vulnerable and most hidden population of lost children because they are not accounted for. They are not on the radar of child welfare agencies or listed in any missing persons database.

Some are simply unknown because they are born to teen or adult mothers who are living on the streets or otherwise missing, others may have been abandoned and left to live by their own means, some may be unreported runaways who have left an abusive home. All of these children are invisible. Why they are off the grid does not matter. For example; each year in the U.S. alone, as many as 2 million youth experience a period of homelessness, and every year more than 5,000 of these young people lose their lives to the streets. 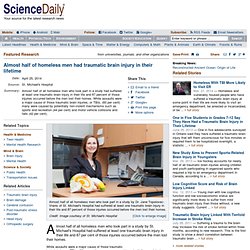 Michael's Hospital had suffered at least one traumatic brain injury in their life and 87 per cent of those injuries occurred before the men lost their homes. While assaults were a major cause of those traumatic brain injuries, or TBIs, (60 per cent) many were caused by potentially non-violent mechanisms such as sports and recreation (44 per cent) and motor vehicle collisions and falls (42 per cent). The study, led by Dr. Jane Topolovec-Vranic, a clinical researcher in the hospital's Neuroscience Research Program, was published today in the journal CMAJ Open. Dr. The fact that so many homeless men suffered a TBI before losing their home suggests such injuries could be a risk factor for becoming homeless, she said.

Dr. In men under age 40, falls from drug/alcohol blackouts were the most common cause of traumatic brain injury while assault was the most common in men over 40 years old. Separately, a recent study by Dr. Dr. Gnome_Sane comments on Homelessness now a crime in cities throughout the U.S. The 1% wants to ban sleeping in cars – because it hurts their 'quality of life' DeathisLaughing comments on Homeless man cries while explaining what it feels like to be called a bum. "I'm not a bum, I'm a human being"