Passages from the Life of a Philosopher - Charles Babbage. How Lord Byron's Scandals Led Ada Lovelace To Become A Mathematician. Eckert & Mauchly and ENIAC. For example, you can argue about what exactly constitutes a computer. 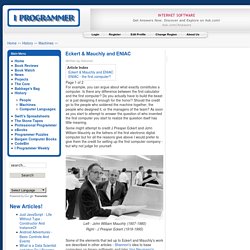 Is there any difference between the first calculator and the first computer? Do you actually have to build the beast or is just designing it enough for the honor? Should the credit go to the people who soldered the machine together, the people who designed it, or the managers of the team? As soon as you start to attempt to answer the question of who invented the first computer you start to realize the question itself has little meaning. Some might attempt to credit J Presper Eckert and John William Mauchly as the fathers of the first electronic digital computer but for all the reasons give above I would prefer to give them the credit for setting up the first computer company - but why not judge for yourself. Left - John William Mauchly (1907-1980) Right - J Presper Eckert (1919-1995) The Big Problem In 1940 electronics was a very new, you could even say almost non- existent subject.

An electromechanical switch - reliable. The Mother of All Demos. The demo[edit] The conference session was presented under the title A research center for augmenting human intellect. 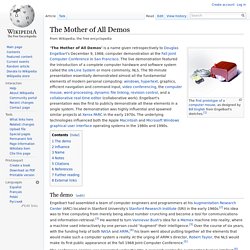 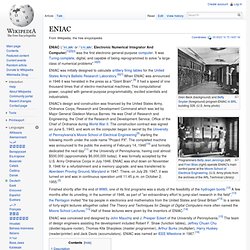 (U.S. Army photo) ENIAC (/ˈini.æk/ or /ˈɛni.æk/; Electronic Numerical Integrator And Computer)[1][2][3] was the first electronic general-purpose computer. It was Turing-complete, digital, and capable of being reprogrammed to solve "a large class of numerical problems".[4][5] ENIAC was initially designed to calculate artillery firing tables for the United States Army's Ballistic Research Laboratory.[6][7] When ENIAC was announced in 1946 it was heralded in the press as a "Giant Brain".[8] It had a speed of one thousand times that of electro-mechanical machines. 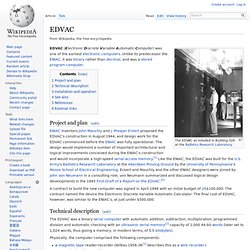 Unlike its predecessor the ENIAC, it was binary rather than decimal, and was a stored program computer. Project and plan[edit] ENIAC inventors John Mauchly and J. John von Neumann. John von Neumann (/vɒn ˈnɔɪmən/; December 28, 1903 – February 8, 1957) was a Hungarian and later American pure and applied mathematician, physicist, inventor, polymath, and polyglot. He made major contributions to a number of fields,[2] including mathematics (foundations of mathematics, functional analysis, ergodic theory, geometry, topology, and numerical analysis), physics (quantum mechanics, hydrodynamics, and fluid dynamics), economics (game theory), computing (Von Neumann architecture, linear programming, self-replicating machines, stochastic computing), and statistics.[3] He was a pioneer of the application of operator theory to quantum mechanics, in the development of functional analysis, a principal member of the Manhattan Project and the Institute for Advanced Study in Princeton (as one of the few originally appointed), and a key figure in the development of game theory[2][4] and the concepts of cellular automata,[2] the universal constructor, and the digital computer. . 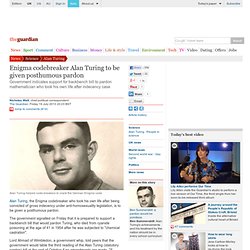 The government signalled on Friday that it is prepared to support a backbench bill that would pardon Turing, who died from cyanide poisoning at the age of 41 in 1954 after he was subjected to "chemical castration". Lord Ahmad of Wimbledon, a government whip, told peers that the government would table the third reading of the Alan Turing (statutory pardon) bill at the end of October if no amendments are made. "If nobody tables an amendment to this bill, its supporters can be assured that it will have speedy passage to the House of Commons," Ahmad said. How The Zebra Got Its Stripes, With Alan Turing. Ada Lovelace. 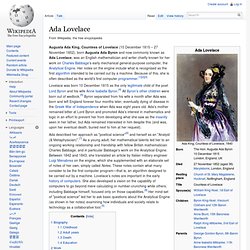 Her notes on the engine include what is recognised as the first algorithm intended to be carried out by a machine. Because of this, she is often described as the world's first computer programmer.[1][2][3] Ada described her approach as "poetical science" and herself as an "Analyst (& Metaphysician)". As a young adult, her mathematical talents led her to an ongoing working relationship and friendship with fellow British mathematician Charles Babbage, and in particular Babbage's work on the Analytical Engine. Biography[edit] Childhood[edit] Ada, aged four On 16 January 1816, Annabella, at George's behest, left for her parents' home at Kirkby Mallory taking one-month-old Ada with her.