Most Earth-Like Worlds Haven't Been Born Yet. What Kinds of Life Forms Could Actually Live on Mars? Bricks to build an Earth found in every planetary system. Earth-like planets orbiting other stars in the Milky Way are three times more likely to have the same type of minerals as Earth than astronomers had previously thought. 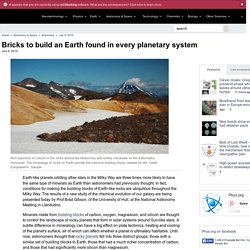 In fact, conditions for making the building blocks of Earth-like rocks are ubiquitous throughout the Milky Way. The results of a new study of the chemical evolution of our galaxy are being presented today by Prof Brad Gibson, of the University of Hull, at the National Astronomy Meeting in Llandudno. Minerals made from building blocks of carbon, oxygen, magnesium, and silicon are thought to control the landscape of rocky planets that form in solar systems around Sun-like stars. A subtle difference in mineralogy can have a big effect on plate tectonics, heating and cooling of the planet's surface, all of which can affect whether a planet is ultimately habitable. "The ratio of elements on Earth has led to the chemical conditions 'just right' for life.

Gibson and team from the E.A. Half Of All Solar Systems With Planets Are Binaries. Carl Sagan 1966 Interview. 7 Good Reasons Why There Might Be Life on Other Planets. A New Equation Reveals Our Exact Odds of Finding Alien Life. I find it beyond weird that these supposedly smart people never factor time into the equation. 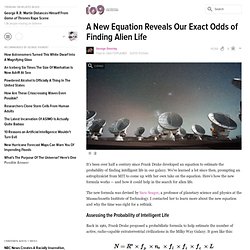 If you miss someone by a minute or a millennium, you've still missed them. Even assuming a habitable world chemically, radiationally and biologically identical to Earth where evolution matched Earth's right up until the rise of humans, we still could've missed a high tech society by 100,000 years. (Radiationally is totally a word. Now.) There's a good reason for that. So it's good to start with an assumption that we do know: Earth like conditions are necessary* but not sufficient for life. And that’s why life may be rare in the Galaxy. By George Dvorsky Our asteroid belt, which is situated between Jupiter and Mars, has traditionally been seen as something of a nuisance. 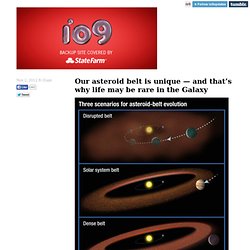 Every once in awhile one of these rocks dislodges itself and heads straight for Earth, what often results in a cataclysmic impact. But ironically, as a new study from the University of Colorado suggests, we may owe our very existence to these chunks of displaced rocks. And according to the researchers, our asteroid belt appears to be unique as far as these things go — what may be contributing to the dearth of life in the galaxy. Astronomers and astrobiologists are increasingly coming to see asteroid belts as an important component to solar system composition, planet formation, and the emergence of life.

Despite the astronomical chaos produced by impact events, asteroids delivered water, organic compounds, and heavy elements to Earth — what are all crucial for the emerge of life. Image: NASA/ESA/A. Rare Earth hypothesis. The Rare Earth Hypothesis argues that planets with complex life, like Earth, are exceptionally rare An alternative view point was argued by Carl Sagan and Frank Drake, among others. 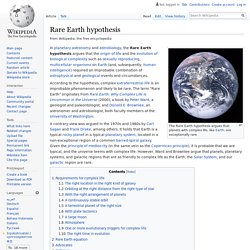 It holds that Earth is a typical rocky planet in a typical planetary system, located in a non-exceptional region of a common barred-spiral galaxy. Given the principle of mediocrity (in the same vein as the Copernican principle), it is probable that the universe teems with complex life. Ward and Brownlee argue to the contrary: that planets, planetary systems, and galactic regions that are as friendly to complex life as are the Earth, the Solar System, and our region of the Milky Way are very rare. Rare Earth's requirements for complex life[edit] In order for a small rocky planet to support complex life, Ward and Brownlee argue, the values of several variables must fall within narrow ranges. The right location in the right kind of galaxy[edit] Star metallicity declines.

Life without complex chemistry is unknown. The senior SETI astronomer on why it's no surprise we haven't yet heard from intelligent extraterrestrials...but will in the next 20 years. : technology. There Might Be 100 Million Planets In The Galaxy With Complex Life. Want to stay on top of all the space news? 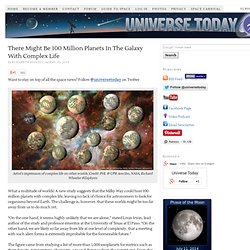 Follow @universetoday on Twitter Artist’s impression of complex life on other worlds. Credit: PHL @ UPR Arecibo, NASA, Richard Wheeler @Zephyris What a multitude of worlds! A new study suggests that the Milky Way could host 100 million planets with complex life, leaving no lack of choice for astronomers to look for organisms beyond Earth. “On the one hand, it seems highly unlikely that we are alone,” stated Louis Irwin, lead author of the study and professor emeritus at the University of Texas at El Paso. The figure came from studying a list of more than 1,000 exoplanets for metrics such as their density, temperature, chemistry, age and distance from the parent star.

Assuming that Europa (a moon of Jupiter believed to have an ocean below its ice) is a good candiate for life, the team estimated that 1% to 2% of exoplanets would have a BCI that is even higher than that. Artists impression of Gliese 581g. So what does this metric mean?