Collective Effervescence. It's become a pre-Halloween ritual in Portland, and all over the world – zombies, gathered en masse, to simultaneously dance to Michael Jackson's "Thriller. 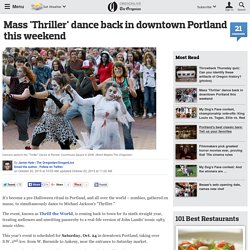 " The event, known as Thrill the World, is coming back to town for its ninth straight year, treating audiences and unwitting passersby to a real-life version of John Landis' iconic 1983 music video. This year's event is scheduled for Saturday, Oct. 24 in downtown Portland, taking over S.W. 2nd Ave. from W. Burnside to Ankeny, near the entrance to Saturday market. Organizers have been running dance practices for weeks, but all it takes is one session to learn the whole routine. One final practice is scheduled before the main event Saturday, and there are also instructional videos online.

Thrill the World Portland is a fundraiser for the Sexual Minority Youth Resource Center, a program of New Avenues for Youth. When: Saturday, Oct. 24, at 3 p.m. --Jamie Hale | jhale@oregonian.com | @HaleJamesB. Dan Ariely: What makes us feel good about our work? How companies force 'emotional labor' on low-wage workers. A Starbucks barista’s job is more than just serving coffee. 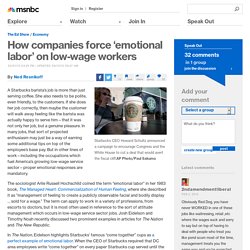 She also needs to be polite, even friendly, to the customers. If she does her job correctly, then maybe the customer will walk away feeling like the barista was actually happy to serve him—that it was not only her job, but a genuine pleasure. In many jobs, that sort of projected enthusiasm may just be a way of earning some additional tips on top of the employee’s base pay.

But in other lines of work—including the occupations which fuel America’s growing low-wage service sector—proper emotional responses are mandatory. The sociologist Arlie Russell Hochschild coined the term “emotional labor” in her 1983 book, The Managed Heart: Commercialization of Human Feeling, where she described it as ”management of feeling to create a publicly observable facial and bodily display … sold for a wage.” In The Nation, Eidelson highlights Starbucks’ famous “come together” cups as a perfect example of emotional labor. Russell Brand on How Capitalism Silences the Inherent Human Desire for Fairness - Truthdig. I believe in change, personal change most of all,” Russell Brand writes. 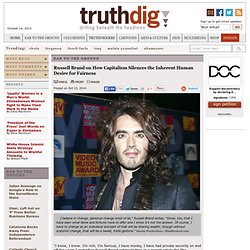 “Know, too, that I have seen what fame and fortune have to offer and I know it’s not the answer. Of course, I have to change as an individual and part of that will be sharing wealth, though without systemic change, that will be a sweet, futile gesture.” Dooley Productions / Shutterstock.com “I know, I know. I’m rich, I’m famous, I have money, I have had private security on and off for years,” comedian Russell Brand acknowledges in a recent article for The Guardian as he discusses the need to abolish the guard labor that protects the rich. And perhaps this is what is so appealing about Brand’s paradoxically lofty yet accessible prose and overall flamboyant persona: his willingness to admit that a revolution must happen at all levels of society, even if that means sacrificing the privilege that he, among many others, reaps disproportionate benefits from.

—Posted by Natasha Hakimi Zapata More Below the Ad. Understanding Jean Baudrillard with Pumpkin Spice Lattes. It’s fall, and America is once again infatuated with pumpkin spice everything. 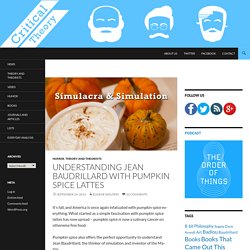 As of last year, the company had sold more than 200 million. We live in a world where our globalized and industrialized agricultural system has erased seasons. The fact is, we can get pumpkin year-round if we really tried, especially canned. For Baudrillard, the world isn’t dictated by reality, but simulation and simulacra. Simulation is different than a simple representation. Images are reflection of a profound reality: A picture of pumpkin is like the real thing.Images mask and denature a profound reality.