How To Talk About Racism, Sexism And Bigotry With Your Friends And Family. Talking to friends and family about racism, sexism, and other forms of injustice is hard.

But with these tips and strategies, you’ll be better prepared to do this important work Tiki torches used to conjure images of hipster BBQs and DIY backyard weddings. But one year into the most overtly racist political administration in modern American history, they instead evoke memories of Nazis marching through Charlottesville. Nooses, inextricably symbolizing lynching, were used in 2017 to terrorize African Americans in Georgia, North Carolina, Florida, New York, Pennsylvania, and Washington D.C. And multiple women have had male strangers—emboldened by our predatory president—grab their genitals on subways, in bodegas, and on the street. Have You Noticed A Guy Walking Around With Only 1 Finger Nail Polished? Image via – youtube.com If you see a man with one of his nails polished, it isn’t some trendy new style. 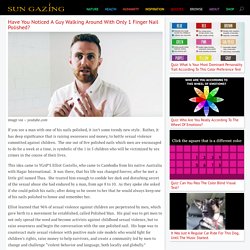 Rather, it has deep significance that is raising awareness and money, to battle sexual violence committed against children. The one out of five polished nails which men are encouraged to do for a week at a time, is symbolic of the 1 in 5 children who will be victimized by sex crimes in the course of their lives. This idea came to YGAP’S Elliot Costello, who came to Cambodia from his native Australia with Hagar International. It was there, that his life was changed forever, after he met a little girl named Thea. Elliot learned that 96% of sexual violence against children are perpetrated by men, which gave birth to a movement he established, called Polished Man. Majority of White Youth in US Supports Black Lives Matter: Poll.

The Black Lives Matter movement against police killings in the U.S. has garnered more support among white youth, a new poll conducted by the Black Youth Project and the Associated Press said Monday, while adding that support among non-white youth has also increased. 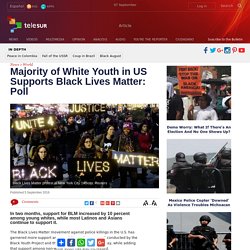 RELATED:Gay Soccer Star Kneels in Solidarity with Kaepernick The GenForward poll says that 51 percent of white people between the ages of 18 and 30 “strongly” or “somewhat” support the anti-racism movement—a significant increase from 42 percent back in June. The first-of-its-kind poll also found that 67 percent of Asian and 62 percent of Latino young adults in the U.S. agreed with the message of Black Lives Matter and its protests. Black youth are the strongest supporters of the movement at more than 85 percent. Meanwhile the poll also found that 66 percent of white youth in the country thought statements by the movement encouraged violence against police.

RELATED:#AllLivesDidnt ​Matter Debunks Critics of Black Lives Matter. 400 Million Fewer Animals Were Killed Last Year Due To More People Opting For... While many vegans believe Meatless Mondays and other cutting-back-consumption campaigns don’t push enough of a paradigm-shift, others argue that these are crucial first steps towards a more compassionate world. 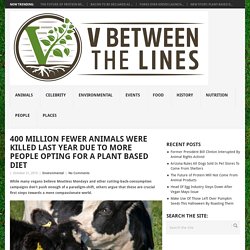 Given that around 93 percent of people still eat meat, it’s difficult to imagine that everyone will cease doing so anytime soon. A world that eats far less meat, however, is already on the way. Meat consumption has been steadily declining in the U.S. —by 10% per capita since 2007, in fact. In that year, for example, the U.S. raised and killed 9.5 billion land animals for food. “What that means is that compared to 2007, last year almost half a billion fewer animals were subjected to the torment of factory farming and industrial slaughter plants–and that’s despite the increase in the U.S. population,” Shapiro explains. The Ferguson Protests Worked. Women in Mexico rally against rampant domestic violence.

Dozens of women have demonstrated in front of Mexico's Interior Ministry in the capital to protest against domestic violence. 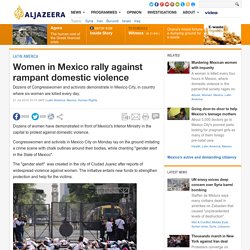 Congresswomen and activists in Mexico City on Monday lay on the ground imitating a crime scene with chalk outlines around their bodies, while chanting "gender alert in the State of Mexico". The "gender alert" was created in the city of Ciudad Juarez after reports of widespread violence against women. The initiative entails new funds to strengthen protection and help for the victims. The protesers called for the setting up of the "gender alert" mechanism in all municipalities across the State of Mexico, one of the country's 31 states. UN officials has said Mexico ranks among the world’s 20 worst countries for violence against women. Catcallers to be Challenged by Anti-Harassment Cyclists - Bed-Stuy - DNAinfo.com New York. 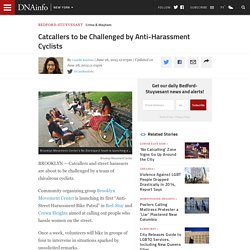 #SelfieWithDaughter Campaign In India Aims To Fight Stigma That Girls Don't H... As part of his continued efforts to curb rising rates of female feticide, India’s prime minister has urged parents to share selfies with their daughters on social media. 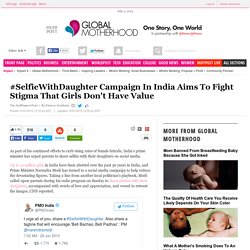 Up to 12 million girls in India have been aborted over the past 30 years in India, and Prime Minister Narendra Modi has turned to a social media campaign to help reduce the devastating figures. Taking a line from another local politician’s playbook, Modi called upon parents during his radio program on Sunday to share photos with their daughters, accompanied with words of love and appreciation, and vowed to retweet the images, CNN reported.