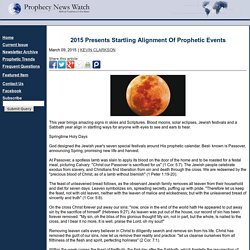 Blood moons, solar eclipses, Jewish festivals and a Sabbath year align in startling ways for anyone with eyes to see and ears to hear. Springtime Holy Days God designed the Jewish year's seven special festivals around His prophetic calendar. At Passover, a spotless lamb was slain to apply its blood on the door of the home and to be roasted for a festal meal, picturing Calvary: "Christ our Passover is sacrificed for us" (1 Cor. 5:7). The feast of unleavened bread follows, as the observant Jewish family removes all leaven from their household and diet for seven days. On the cross Christ forever put away our sins: "now, once in the end of the world hath He appeared to put away sin by the sacrifice of himself" (Hebrews 9:27). Removing leaven calls every believer in Christ to diligently search and remove sin from his life. Humans Are Free. 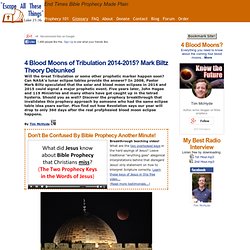 Can NASA’s lunar eclipse tables provide the answer? In 2008, Pastor Mark Biltz speculated that the solar and blood moon eclipses in 2014 and 2015 could signal a major prophetic event. Five years later, John Hagee and 119 Ministries and many others have got caught up in the tetrad hysteria. Should you as well? Discover the prophecy breakthrough that invalidates this prophecy approach by someone who had the same eclipse table idea years earlier. By Tim McHyde Back in 2008, Mark Biltz had an promising idea. Joel 2:31 (HCSB) — The sun will be turned to darkness and the moon to blood before the great and awe–inspiring Day of the Lord comes.

Joel and Revelation seem to plainly describe an end time solar eclipse and lunar eclipse. Since science has long been able to calculate and publish upcoming eclipses in advance, Mark decided to try to use this data to find the year when this eclipse prophecy might be fulfilled. 1. 2. Blood Moons over Israel. On June 15, 2011, there will be a full lunar eclipse visible only in Israel, parts of Africa, and the Middle East, as well as parts of Asia and Australia; but VERY well seen in Israel, AND visible in the night sky for a longer period of time than normal. 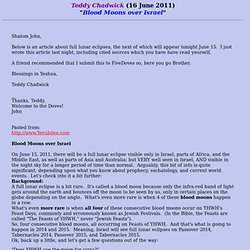 Arguably, this bit of info is quite significant, depending upon what you know about prophecy, eschatology, and current world events. Let's check into it a bit further: Background: A full lunar eclipse is a bit rare. It's called a blood moon because only the infra-red band of light gets around the earth and bounces off the moon to be seen by us, only in certain places on the globe depending on the angle. What's even more rare is when all four of these consecutive blood moons occur on YHWH's Feast Days, commonly and erroneously known as Jewish Festivals. So, four consecutive blood moons, all occurring on Feasts of YHWH. Ok, back up a little, and let's get a few questions out of the way: "Does YHWH use the moon for signs? "

The Comets of God Blog. Due to John Hagee’s recent book, Four Blood Moons: Something is About to Change (Worthy Publishing, Oct. 2013) there has recently been a surge of interest in “four blood moons” as a sign that relates to end times Bible prophecy. 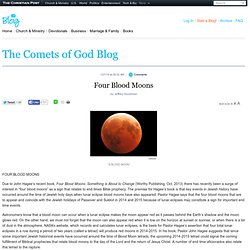 The premise for Hagee’s book is that key events in Jewish history have occurred around the time of Jewish holy days when lunar eclipse blood moons have also appeared. Pastor Hagee says that the four blood moons that are to appear and coincide with the Jewish holidays of Passover and Sukkot in 2014 and 2015 because of lunar eclipses may constitute a sign for important end time events. Astronomers know that a blood moon can occur when a lunar eclipse makes the moon appear red as it passes behind the Earth’s shadow and the moon glows red.

On the other hand, we must not forget that the moon can also appear red when it is low on the horizon at sunset or sunrise, or when there is a lot of dust in the atmosphere. Acts 2:19-20 Revelation 6:12-14 Matthew 24:29. The Museum of Idolatry. The Christ in Prophecy Journal.