Leathality. Energy. Energy Energy may be the most misunderstood, and bandied about term in small arms ballistics, at least as it relates to stopping power. 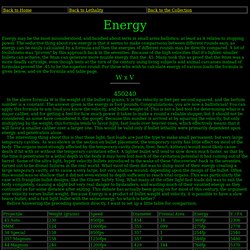 The seductive thing about raw energy is that it seems to make comparisons between different rounds easy, as energy can be easily calculated by a formula and then the energies of different rounds may be directly compared. A lot of foolishness was "proven" by this approach back in the seventies. Because of the high velocities that it's lighter, smaller bullets can achieve, the 9mm can generate more muzzle energy than the .45. Many took this as proof that the 9mm was a more deadly cartridge, even though tests at the turn of the century using living subjects and animal carcasses instead of formulas proved the .45 to be the superior round. W x V. Placement. Placement Bullet placement is the single most important factor contributing to both killing, and stopping power. 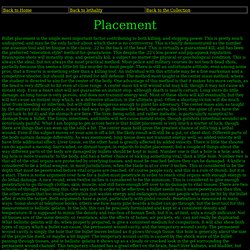 This is pretty much undisputed, and may be the only factor about which there is no controversy. This is clearly demonstrated as the number one assassin tool and technique is the classic .22 to the back of the head. This is virtually a guaranteed kill, and has been the preferred "execution style" method for generations. This despite the .22's low power and pip-squeak reputation. Conclusion Use a bullet which will reliably penetrate to at least 12". 1/3 Stopping Power Myth. (This is the first of three articles that will address this subject. 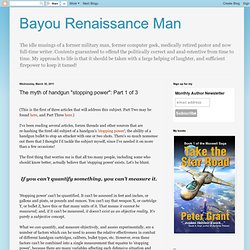 Part Two may be found here, and Part Three here.) I've been reading several articles, forum threads and other sources that are re-hashing the tired old subject of a handgun's 'stopping power'; the ability of a handgun bullet to stop an attacker with one or two shots. There's so much nonsense out there that I thought I'd tackle the subject myself, since I've needed it on more than a few occasions! The first thing that worries me is that all too many people, including some who should know better, actually believe that 'stopping power' exists.

Let's be blunt. If you can't quantify something, you can't measure it. 'Stopping power' can't be quantified. What we can quantify, and measure objectively, and assess experimentally, are a number of factors which can be used to assess the relative effectiveness in combat of different handgun cartridges, calibers, bullet types, etc. 2/3 Stopping Power Myth. In the first part of this three-part series, we saw that there's no such thing as 'stopping power'. 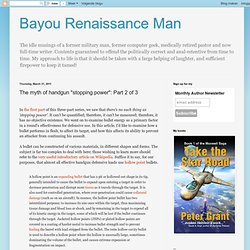 It can't be quantified; therefore, it can't be measured; therefore, it has no objective existence. We went on to examine bullet energy as a primary factor in a round's effectiveness for defensive use. In this article, I'd like to examine how a bullet performs in flesh, to affect its target, and how this affects its ability to prevent an attacker from continuing his assault. A bullet can be constructed of various materials, in different shapes and forms. The subject is far too complex to deal with here; those wishing to learn more should refer to the very useful introductory article on Wikipedia. A hollow point is an expanding bullet that has a pit or hollowed out shape in its tip, generally intended to cause the bullet to expand upon entering a target in order to decrease penetration and disrupt more tissue as it travels through the target.

3/3 Stopping Power Myth. Part 1 of this series focused on analyzing 'stopping power' (and demonstrating that it doesn't exist as an objective, measurable reality), and went on to look at bullet energy. 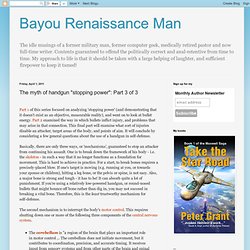 Part 2 examined the way in which bullets inflict injury, and problems that may arise in that connection. This final part will examine what sort of injuries disable an attacker, target areas of the body, and points of aim. It will conclude by considering a few general questions about the use of a handgun in self-defense. Basically, there are only three ways, or 'mechanisms', guaranteed to stop an attacker from continuing his assault. One is to break down the framework of his body - i.e. the skeleton - in such a way that it no longer functions as a foundation for movement. Stopping Power - Wiki. Stopping power is the ability of a firearm or other weapon to cause a penetrating ballistic injury to a target (human or animal) enough to incapacitate the target where it stands. 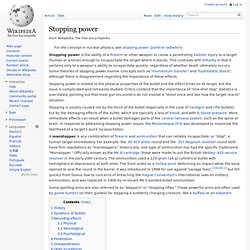 This contrasts with lethality in that it pertains only to a weapon's ability to incapacitate quickly, regardless of whether death ultimately occurs. Some theories of stopping power involve concepts such as "momentum transfer" and "hydrostatic shock", although there is disagreement regarding the importance of these effects. Stopping power is related to the physical properties of the bullet and the effect it has on its target, but the issue is complicated and not easily studied. Critics contend that the importance of "one-shot stop" statistics is overstated, pointing out that most gun encounters do not involve a "shoot once and see how the target reacts" situation. History[edit] The concept of stopping power appeared in the 19th Century when colonial troops (e.g.