Birth of the 10mm Autopistol Cartridge. Where it all began… The 10mm autopistol (and 10mm cartridge) was first sprung on an unsuspecting gunzine public in the February 1981 issue of Harris Publications Combat Handguns, in an article1 by a not entirely disinterested party, one John Dean "Jeff" Cooper. 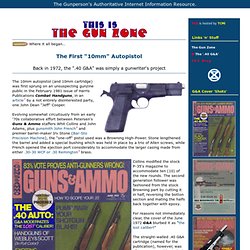 Evolving somewhat circuitously from an early '70s collaborative effort between Petersen's Guns & Ammo staffers Whit Collins and John Adams, plus gunsmith John French2 and premier barrel-maker Irv Stone (), the "one-off" pistol used was a Browning High-Power. Stone lengthened the barrel and added a special bushing which was held in place by a trio of Allen screws, while French opened the ejection port considerably to accommodate the larger casing made from either .30-30 WCF or .30 Remington3 brass. Collins modified the stock P-35's magazine to accommodate ten (10) of the new rounds. For reasons not immediately clear, the cover of the June 1972 G&A blurbed it as "the lost caliber! " EXCLUSIVE! Of course it was "exclusive!

" The 10mm Auto Pistol. This 10mm article, which I wrote about nine months ago, has generated a lot of response. 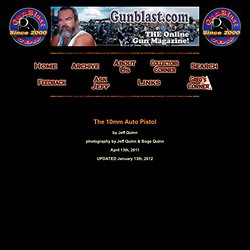 Apparently, and justly so, there are still a lot of knowledgeable shooters who appreciate the power and accuracy of this dandy cartridge. This update is not a rehash of everything that was covered at that time, but is here because I thought it significant to bring to the reader’s attention this new load from Buffalo Bore, for a couple of reasons. One is that some places around the US already have or are considering imposing a ban on lead hunting ammunition, and the bullet in this new load contains no lead. 10mm Ballistics Chart. 10mm Auto. Although it was selected for service by the Federal Bureau of Investigation in 1989 from the aftermath of the 1986 F.B.I. 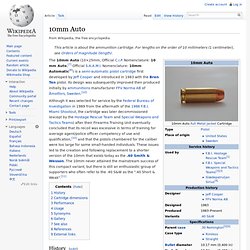 Miami Shootout, the cartridge was later decommissioned (except by the Hostage Rescue Team and Special Weapons and Tactics Teams) after their Firearms Training Unit eventually concluded that its recoil was excessive in terms of training for average agent/police officer competency of use and qualification,[10] and that the pistols chambered for the caliber were too large for some small-handed individuals. These issues led to the creation and following replacement to a shorter version of the 10mm that exists today as the .40 Smith & Wesson. The 10mm never attained the mainstream success of this compact variant, but there is still an enthusiastic group of supporters who often refer to the .40 S&W as the ".40 Short & Weak".[11] History[edit] Cartridge dimensions[edit] 10mm Auto Maximum C.I.P.

Performance[edit] Some commercial loadings are as follows: Usage[edit] Synonyms[edit] 10mm Auto Cartridge. The Birth Of The 10mm Auto While we often think of the 10mm Auto as a thoroughly modern cartridge, the idea of a powerful mid-bore is not a new one. 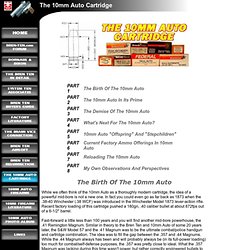 In fact you could even go as far back as 1873 when the .38-40 Winchester (.38 WCF) was introduced in the Winchester Model 1873 lever-action rifle. Recent factory loading of this cartridge pushed a 180gn, .40 caliber bullet at about 872fps out of a 6-1/2" barrel. Fast-forward a little less than 100 years and you will find another mid-bore powerhouse, the .41 Remington Magnum. Similar in theory to the Bren Ten and 10mm Auto of some 20 years later, the S&W Model 57 and the .41 Magnum was to be the ultimate combat/police handgun and cartridge combination. 10mm - '10 Ring' Forum - GLOCKtalk. --> Holsters, Restraints and other Duty Gear at CopsPlus.com Advertising | DMCA | Privacy Policy | Terms of Use | Contact Us Powered by vBulletin® Version 3.8.7Copyright ©2000 - 2014, vBulletin Solutions, Inc. 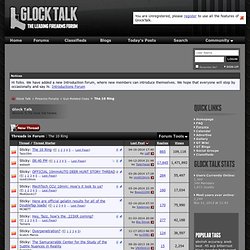 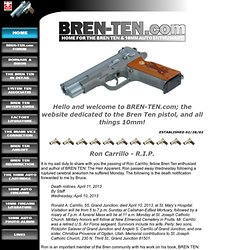 Ron Carrillo - R.I.P. It is my sad duty to share with you the passing of Ron Carrillo, fellow Bren Ten enthusiast and author of BREN TEN: The Heir Apparent. Ron passed away Wednesday following a ruptured cerebral aneurism he suffered Monday. The following is the death notification forwarded to me by Bruce. Death notices, April 11, 2013 By Staff Wednesday, April 10, 2013 Ronald A.

Ron is an important member of the Bren community with his work on his book, BREN TEN: The Heir Apparent. Introduction Hello and welcome to BREN-TEN.com! The company that produced the Bren Ten (Dornaus & Dixon Enterprises, Inc.) only lasted a few short years and fewer than 1,500 pistols were produced, but the 10mm Auto cartridge lives on.