Resume Spring is the best way to take the pain out of the process to create an amazing resume. It provides a web-based wizard that takes you step by step through the process of creating your A+ resume & number of professional templates to choose from.

Hospitality & Student Online Resume Builder by Resumespring. The first 24 hours after losing your job - Get To Work. Even though the job market has improved over time, job loss will always be a factor in the marketplace. 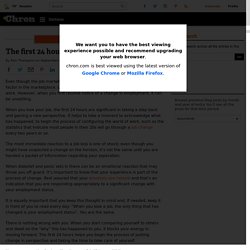 Learning how to adjust and bounce back is part of work. However, when you first receive notice of a change in employment, it can be unsettling. When you lose your job, the first 24 hours are significant in taking a step back and gaining a new perspective. It helps to take a moment to acknowledge what has happened, to begin the process of configuring the world of work, such as the statistics that indicate most people in their 20s will go through a job change every two years or so. The most immediate reaction to a job loss is one of shock; even though you might have suspected a change on the horizon, it’s not the same until you are handed a packet of information regarding your separation. When disbelief and panic sets in there can be an emotional reaction that may throw you off guard. There is nothing wrong with you. Here are some tips for handling the next 24-48 hours.

How to Create an Eye-Catching Accountant Resume. 10 Tips on Writing an Effective Resume, Which Will Land You the Dream Job. You've just sent your resume to a company and you hope they will call. 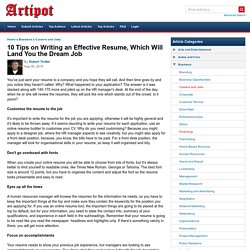 And then time goes by and you notice they haven't called. Why? What happened to your application? The answer is it was stacked along with 140-170 more and piled up on the HR manager's desk. At the end of the day, when he or she will review the resumes, they will pick the one which stands out of the crowd. Customise the resume to the job It's important to write the resume for the job you are applying, otherwise it will be highly general and it's likely to be thrown away. Sportscaster Feldman heeded advice to get where he is now. The best thing Dave Feldman has done in his career has been to heed advice. 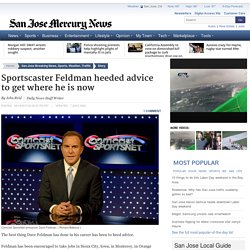 Feldman has been encouraged to take jobs in Sioux City, Iowa, in Monterey, in Orange County, all of them leading to a prime gig at ESPN in 1996. The 1983 graduate of Palo Alto High now rests comfortably in a studio chair at Comcast Sports Net in San Francisco. Find your Dream Job & Email Alert. #1 Online Resume Builder by ResumeSpring. Renowned Stanford professor launches new education think tank. Linda Darling-Hammond will continue to teach part-time at Stanford, but will devote much of her energy to the new Learning Policy Institute. 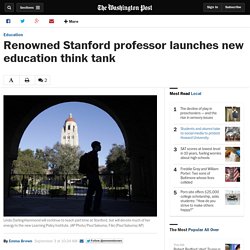 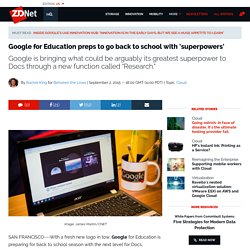 Members of the Google for Education product team elaborated on the new digital school supplies in a makeshift elementary school classroom decorated with sharpened yellow pencils and a bevy of tin lunch pails adorned with 1980s pop culture icons such as Pac-Man, Indiana Jones and Knight Rider at the Internet giant's San Francisco office on Wednesday morning. "It's magical when a student can get feedback from a teacher in real-time," posited Jonathan Rochelle, director of product management for Google for Education. "Working together means more student engagement.

" Over 40 million students and teachers have deployed Google Apps for Education to date with one million users subscribed in New York City alone. "It turns a document into a conversation," Ranjan observed. The Mountain View, Calif. Image via Google. How to Create Resume Online. How to Make a Better Resume If You Are In the Hospitality Industry. CARPENTER, MOSS, REYNOLDS HOMER AS CARDINALS BEAT GIANTS 7-5. Matt Carpenter, Brandon Moss and Mark Reynolds all hit home runs, Yadier Molina drove in two and the St. 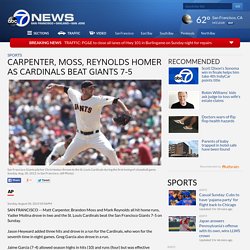 Louis Cardinals beat the San Francisco Giants 7-5 on Sunday. Jason Heyward added three hits and drove in a run for the Cardinals, who won for the seventh time in eight games. Greg Garcia also drove in a run. Professional Resume Templates by ResumeSpring. Writer / Reporter / Researcher for Cannabis News - Inside. Inside.com is hiring a full time writer/curator to cover cannabis news. 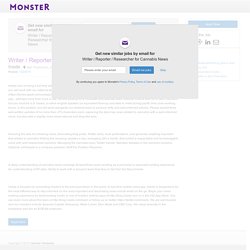 We are building vertical-specific news apps. In this position you will work with our editorial team to publish content to and iOS/Android applications ( If you do your job well, people will flock to frequent the app - perhaps more than once a day. We are looking for a motivated and talented team member to work with us in San Francisco, but you must be U.S. based, a native english speaker (or equivalent fluency) and able to meet during pacific time zone working hours. In this position you will work alongside our editorial team to produce witty and well-informed articles. Please submit three well-written updates of no more than 270 characters each, capturing the day's top news related to cannabis with a well-informed voice, but also add a slightly more observational and blog-like tone. 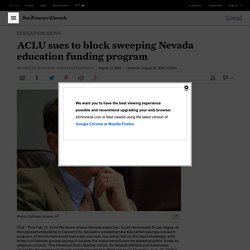 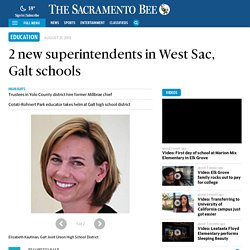 Linda Luna, who served most recently as superintendent of the Millbrae Elementary School District, was hired July 1 as chief of the Washington Unified School District in West Sacramento, which has about 8,000 students. Luna served five years through June as superintendent of the Millbrae K-8 district. She said Friday she initially will focus on bolstering public awareness of the district activities, engaging and collaborating with cities and local service agencies in areas of common interests and ensuring that all students, from transitional kindergarten through high school, are prepared for college and career tracks. 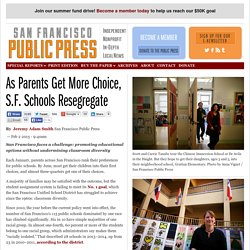 By June, most get their children into their first choices, and almost three-quarters get one of their choices. A majority of families may be satisfied with the outcome, but the student assignment system is failing to meet its No. 1 goal, which the San Francisco Unified School District has struggled to achieve since the 1960s: classroom diversity. Since 2010, the year before the current policy went into effect, the number of San Francisco’s 115 public schools dominated by one race has climbed significantly.

But the San Francisco Public Press has found the problem may be even more stark: If Asian and Filipino students are counted together — the standard used by the Census — together the number of racially isolated schools in the last school year rose to 39. Best Online Student Resume Writing & Design by ResumeSpring. First day of school for LAUSD includes concerns over MiSiS, vaccinations. LOS ANGELES — It may still feel like summer outside, but thousands of Los Angeles Unified School District students headed back to class today for the first day of school.

About 550,000 students in the nation’s second-largest school district flocked to campuses across the area. Only one school in the district, Bell Senior High School, still operates on a year-round schedule. Those students went back to class on July 1. For everyone else, the alarm clock began ringing early this morning. Best Online Resume Builder & Writing by ResumeSpring.

Emergency Funding: Mayor Announces $8 Million Federal Grants to Improve Emergency Services. #1 Resume Creator & Writing in San Francisco by ResumeSpring. The next generation of job search is happening right now at JobJournal.com! Imagine applying for a job online where you get the attention you deserve. It's the next generation of job search and it's happening right now at JobJournal.com! JobJournal.com site uses micro-fees to improve results for both jobseekers and employers. (Why the fees?) It's a totally new type of job board designed to eliminate the majority of problems that frustrate both sides in the online employment process. Resume Submission Privacy Choices on ResumeSpring. Privacy Policy Introduction We understand your concerns about privacy and we respect your privacy. This is why we have taken the time to disclose our information collection practices and our privacy policy. Los Angeles, sans San Francisco, is likely bidder for 2024 Olympics.

Find the best Accounting & Sales Resume. SF school leaders still want to diversify enrollment after assignment changes fail. The assignment process that has determined where students attend public schools in San Francisco for the past five years will not change anytime soon, but the conversation of how to ensure schools are more racially diverse is just getting started. A year after a proposed change was introduced, the Board of Education on Tuesday voted 4-3 in favor of continuing to use the San Francisco Unified School District’s current school assignment process, which gives enrollment priority to kindergarten students who live in neighborhoods with the lowest standardized test scores. Board President Emily Murase — along with commissioners Sandra Fewer and Rachel Norton, who authored the resolution — voted for the policy change. Vice President Matt Haney and commissioners Jill Wynns, Shamann Walton and Hydra Mendoza-McDonnell were the dissenting votes.

“SFUSD’s graduation rate is a marked improvement over the 2012-13 graduation rate of 81.7 percent, and it’s better than the state of California’s graduation rate of 81 percent,” said Superintendent Richard A. Carranza. “Considering that the class of 2014 was also the first class that had to complete more rigorous graduation requirements, we are particularly proud of the accomplishments of our students and staff.” “SFUSD raised the bar and supported our students graduating better prepared for success in college and careers,” he added. School principals and district officials questioned the data, and after SFUSD officials closely audited student records, they found that some student information was missing or incorrect. #1 Create a Student Resume in San Francisco by ResumeSpring. Best Online Resume Builder in San Francisco by ResumeSpring. ResumeSpring - Create a #1 Professional Resume in Minutes.