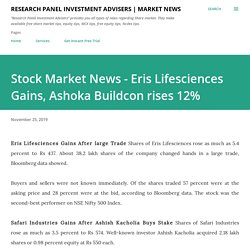 About 38.2 lakh shares of the company changed hands in a large trade, Bloomberg data showed. Buyers and sellers were not known immediately. Of the shares traded 57 percent were at the asking price and 28 percent were at the bid, according to Bloomberg data. The stock was the second-best performer on NSE Nifty 500 Index. Safari Industries Gains After Ashish Kacholia Buys Stake Shares of Safari Industries rose as much as 3.5 percent to Rs 574. Besides, Saif India Holdings acquired 5.78 lakh shares or 2.59 percent equity at Rs 540 each. Ashoka Buildcon rises 12% on LoA from NHAI: ​Ashoka Buildcon share price rose 12 percent on November 25 after the company received a Letter of Award (LoA) from NHAI for the project of 4 laning of NH-161 from Kandi to Ramsanpalle in the State of Telangana under Bharatmala Pariyojna on hybrid annuity model. 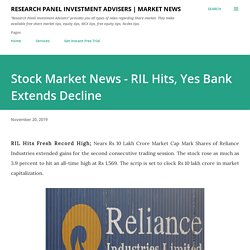 The stock rose as much as 3.9 percent to hit an all-time high at Rs 1,569. The scrip is set to clock Rs 10 lakh crore in market capitalization. Reliance Jio joins Airtel, Vodafone Idea to raise tariffs- Telecom tariffs are finally set to rise with Reliance Jio also on Tuesday stating that to strengthen the industry it will take measures like increasing tariffs in the next few weeks. On Monday, Vodafone Idea and Bharti Airtel had said that they will increase tariffs from December. This will be the first time since September 2016 — when Reliance Jio launched its services — that tariffs will be revised upwards by the telecom companies. Stock Market News - Vodafone Idea falls, Lupin Gains, Power Grid Gains. Vodafone Idea falls 8% Shares of Vodafone Idea fell as much as 7.5 percent to Rs 3.70. 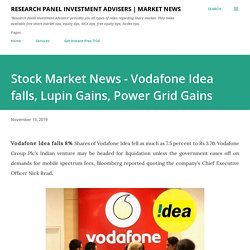 Vodafone Group Plc’s Indian venture may be headed for liquidation unless the government eases off on demands for mobile spectrum fees, Bloomberg reported quoting the company’s Chief Executive Officer Nick Read. Lupin Gains After Offloading Japanese Business Shares of Lupin rose as much as 3.1 percent to Rs 758.80. India’s fourth-largest drugmaker by market value informed the exchanges it has entered into a definitive agreement to sell 99.82 percent of its stake in Kyowa Pharmaceutical Industry Co. to Plutus Ltd., a subsidiary of the private equity firm Unison Capital Partners, at an enterprise value of 57,361 million Japanese yen—nearly Rs 3,702.4 crore. 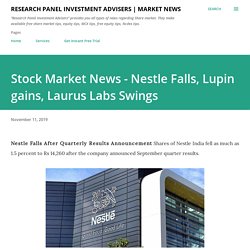 NEWS ALERT | Infosys looking to beef up whistleblower investigation: Report -- Infosys rules out insider trading -- Co in talks with law firms JSA Law, Khaitan & Co for investigation -- Appointment of one or both of the above-mentioned companies, in addition to Shardul Amarchand Mangaldas already appointed. Stock Market News - Raymond Jumps, Mindtree Falls, Rupee slips 34 paise. Raymond Jumps 12% To Four-Month High Shares of Raymond rose as much as 12 percent, the most in a month, to Rs 754.20, the highest since July July 5. 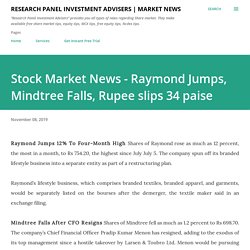 The company spun off its branded lifestyle business into a separate entity as part of a restructuring plan. Raymond’s lifestyle business, which comprises branded textiles, branded apparel, and garments, would be separately listed on the bourses after the demerger, the textile maker said in an exchange filing. Mindtree Falls After CFO Resigns Shares of Mindtree fell as much as 1.2 percent to Rs 698.70. The company’s Chief Financial Officer Pradip Kumar Menon has resigned, adding to the exodus of its top management since a hostile takeover by Larsen & Toubro Ltd. Menon would be pursuing career opportunities outside the company and would be relieved from services on Nov. 15, the company said in an exchange filing. Stock Market News - NBCC Jumps 19%, Sensex hits an all-time high. Sensex hits an all-time high of 40,670 - The Sensex rallied to a fresh all-time high on Thursday morning after the Narendra Modi-led government announced a major reform to bolster the stressed real-estate sector.

The Sensex jumped more than 185 points to a fresh high of 40,656.56. Yesterday, Sensex ended the session at a closing high 40,469. The previous record high came at 40,606, hit in intra-day trade yesterday. Meanwhile, the broader Nifty hit the crucial 12,000-mark on Wednesday. IndusInd Bank, HDFC shares were among the biggest gainers, jumping up to 2%. Rupee opens lower at 71.05 per dollar - The Indian rupee opened at 71.05 per dollar on Thursday versus the previous close 70.98. JB Chemicals share price gains 6% - The share price of JB Chemicals and Pharmaceuticals added more than 6 percent in the early trade on November 7 after the company is going to consider buyback of its shares. 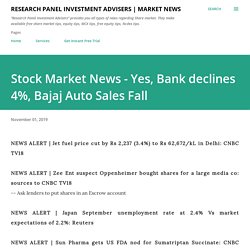 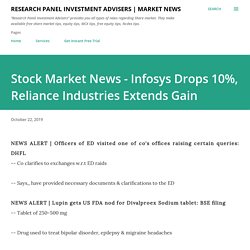 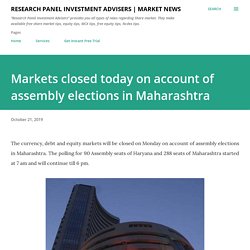 The polling for 90 Assembly seats of Haryana and 288 seats of Maharashtra started at 7 am and will continue till 6 pm. The counting of votes will take place on October 24. Financial markets will resume trading on Tuesday, October 22. The benchmark S&P BSE Sensex closed up 0.63 percent at 39,298.38 on Friday, while the broader NSE Nifty ended 0.65 percent higher at 11,661.85. Stock Market News - BHEL Surges 27%, Reliance shares up. 3M India Slumps After Large Trade Shares of 3M India fell as much as 9.9 percent, the most in over a month, to Rs 20,610. About 2,00,173 shares 1.8 percent equity of the company changed hands in large trade, Bloomberg data showed.

Buyers and sellers were not known immediately. Trading volume was almost six times its 20-day average, according to Bloomberg data. BHEL Surges The Most In Over A Decade Shares of Bharat Heavy Electricals rose as much as 26.6 percent, the most since May 2009, to Rs 56.45. The stock extended gains for the second consecutive trading session. A group of secretaries will meet on Oct. 18 to consider cutting the government’s holding below 51 percent in at least eight public-sector companies, a person familiar with the matter said, as the Modi administration looks to bridge the budget gap.

About 30 lakh shares of the company changed hands in a large trade, Bloomberg data showed. Buyers and sellers were not known immediately. Stock Market News - BPCL's share price jumped, Wipro up 2% NEWS ALERT | Sun Pharma launches Drizalma Sprinkle in the US for oral use: BSE filing -- Drizalma Sprinkle is a serotonin and norepinephrine reuptake inhibitor (SNRI) designed for the treatment of various neuropsychiatric and pain disorders in patients who have difficulty swallowing. Inox Wind signs an additional deal with Adani Green for SECI 50 MW capacity: BSE filing -- Signs an additional deal with Adani Green for a project that is part of the capacity won under SECI bids for wind projects -- Co signs a deal for sale of a 50 MW wind power project at Dayapar, Kutch in the state of Gujarat in which Adani will be the strategic investor -- Project comprises of 25 Nos. of its latest 2 MW Wind Turbines AB Pandey on GST on ATF and Income-tax slab rejig -- GST on ATF was deferred by the Council earlier; May discuss again if the fresh proposal is made -- Any discussion on change in the income-tax slab is taken up during Budget -- Change in the corporation tax rate was an exception.

Stock Market News - Indiabulls Housing falls, IRCTC Falls. NEWS ALERT | Indiabulls Hsg makes repayment of the entire maturity proceeds for Masala Bonds: BSE filing --The Company has today made the repayment of the entire maturity proceeds from the pre-funding done to Axis Trustee Alert: Masala Bonds worth Rs 1,330 crore were issued by the company on September 2016 and were due to mature on 15th October 2019. Indiabulls Housing Finance Extends Fall, - Shares Drop Nearly 8% Shares of Indiabulls Housing Finance fell as much as 7.5 percent to Rs 183.05. The stock extended declines for the second consecutive trading session. The company’s board intends to go for a buyback of shares and will take a final decision in this regard after receiving concurrence from the market regulator Securities and Exchange Board of India.

Future Lifestyle Gains After Large Trade Shares of Future Lifestyle Fashions rose as much as 4.2 percent to Rs 419.80. Stock Market News - Adani Gas Jumps, Infosys Worst Performer. NEWS ALERT | US court delivers a verdict against UPL arm: BSE Filing -- Delivers verdict in favor of AgroFresh who pursued litigation demanding $373 m towards unjust enrichment, lost profits & as punitive damages -- UPL says it is disappointed in the jury's verdict & will seek to overturn it World Bank says the slowdown in India is severe, cuts GDP forecast to 6% - The World Bank cut India’s economic growth forecast by the most among South Asian nations on Sunday, below the outlook pegged by the nation’s central bank for this year, mainly because of a deceleration in domestic demand. Infosys Worst Performer On Sensex, Nifty Shares of Infosys fell as much as 4.3 percent to Rs 780.

Stock Market News - Zee Entertainment Slumps, NIIT Gains. NEWS ALERT | US FDA issues Form 483 to Aurobindo’s Unit 7 -- Failure to thoroughly review any unexplained discrepancy -- No written procedure for processes and production. Stock Market News - PSU Banks Gain, HDFC Top Gainer. RBI monetary policy: The Reserve Bank of India is likely to go for yet another rate cut on October 4, the fifth in a row, as inflation is within the comfort zone and the need to boost the economy is pressing.

RBI Governor Shaktikanta Das has already hinted that benign inflation provides room for further monetary policy easing while space for fiscal space is limited. BPCL trades flat with negative bias -- The international Credit Rating Agency Moody's on Thursday warned of downgrading Bharat Petroleum Corporation (BPCL) to Ba1 if the government goes ahead with privatization by selling its stake to a private entity.

HDIL slips 4% after EOW arrests Rakesh and Sarang Wadhawan Alert: They are the promoters of HDIL. Stock Market News - BPCL Jumps, City Gas Distributors Rally. BPCL Jumps The Most In Over A Week Shares of Bharat Petroleum Corporation Ltd. rose as much as 8.8 percent, the most since Sept. 23, to Rs 511.55. A group of secretaries on Monday cleared strategic sales in BPCL, BEML, Container Corporation of India and Shipping Corporation of India, according to ET report. Stock Market News - Cipla Falls, Lakshmi Vilas Bank Hits 5% NEWS ALERT | Fashion retailer 'Forever 21' files for bankruptcy: Reuters.

HDFC AMC Falls - The Most In Six Months Shares of the asset management company fell as much as 6 percent, the most since Dec. 21, 2018, to Rs 1,816.60. In a move to rescue investors of its fixed maturity plans, the asset management company will purchase Essel Group companies’ non-convertible debentures of up to Rs 500 crore, thereby transferring any loss (or gain) due to the investment from investors to itself Rupee Opens: The Indian rupee opened higher at 69.83 per dollar on Tuesday versus previous close 69.90. Business Analyst Jobs in Indore - RESEARCH PANEL INVESTMENT ADVISORS 20 Feb 2019. Stock Market News- BHEL Gains, Laurus Labs Gains,S Chand Falls. Research panel investment advisers - Universalhunt.com. Stock Market News- Hexaware Technologies gains, Gruh Finance Falls 7% Hexaware Technologies gains 2% - on the acquisition: Hexaware Technologies Inc., a wholly owned subsidiary of Hexaware Technologies, India has acquired 100% shares of Mobiquity Inc. and Hexaware Technologies has acquired 100% shares of Mobiquity Softech.

Gruh Finance Falls 7% - After Block Deal Shares of Gruh Finance fell as much as 6.9 percent, the most in nearly a month to Rs 286.05. About 3.08 crore shares or 4.2 percent equity of the company changed hands in multiple block deals. Adani Gas Jumps - The Most In Over A Week Shares of Adani Gas rose as much as 6.7 percent, the most since June 03, to Rs 180. Total SA is advancing on a deal to acquire a 30 percent stake in city gas distribution (CGD) company Adani Gas for over $800 million, or upwards of Rs 5,500 crore.