Time's up, Nigel Farage, and I'm not just talking about your role on LBC. Nigel Farage has left the building. 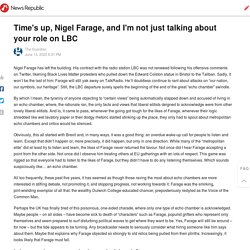 For years, the Tories have banked on impunity. Is their luck finally running out? Will the Tories get away with it? 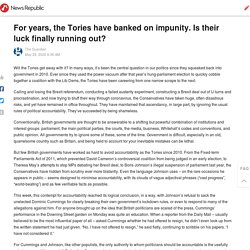 In many ways, it’s been the central question in our politics since they squeaked back into government in 2010. Ever since they used the power vacuum after that year’s hung-parliament election to quickly cobble together a coalition with the Lib Dems, the Tories have been careering from one narrow scrape to the next. Calling and losing the Brexit referendum, conducting a failed austerity experiment, constructing a Brexit deal out of U-turns and procrastination, and now trying to bluff their way through coronavirus, the Conservatives have taken huge, often disastrous risks, and yet have remained in office throughout.

They have maintained that ascendancy, in large part, by ignoring the usual rules of political accountability. They’ve succeeded by being shameless. But few British governments have worked as hard to avoid accountability as the Tories since 2010. After Major came Tony Blair, with his crushing majorities. . • Andy Beckett is a Guardian columnist. The Guardian view on Dominic Cummings: Time to go. The prime minister’s chief adviser should be leaving Downing Street for good, not be giving press conferences from its rose garden. 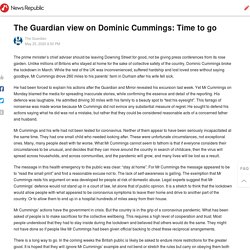 Unlike millions of Britons who stayed at home for the sake of collective safety of the country, Dominic Cummings broke the lockdown in March. While the rest of the UK was inconvenienced, suffered hardship and lost loved ones without saying goodbye, Mr Cummings drove 260 miles to his parents’ farm in Durham after his wife fell sick. He had been forced to explain his actions after the Guardian and Mirror revealed his excursion last week. Yet Mr Cummings on Monday blamed the media for spreading inaccurate stories, while confirming the essence and detail of the reporting. Dominic Cummings 'Didn't Break Lockdown Rules' Says Downing Street - LADbible. The absolute best workout apps for exercising at home.

Working out in the gym just isn't in the cards all the time. 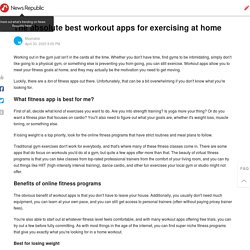 Whether you don't have time, find gyms to be intimidating, simply don't like going to a physical gym, or something else is preventing you from going, you can still exercise. Workout apps allow you to meet your fitness goals at home, and they may actually be the motivation you need to get moving. Luckily, there are a ton of fitness apps out there.

Unfortunately, that can be a bit overwhelming if you don't know what you're looking for. What fitness app is best for me? First of all, decide what kind of exercises you want to do. If losing weight is a top priority, look for the online fitness programs that have strict routines and meal plans to follow. Traditional gym exercises don't work for everybody, and that's where many of these fitness classes come in. Benefits of online fitness programs The obvious benefit of workout apps is that you don't have to leave your house. Best for losing weight Image: beachbody / apple The Good. Why the government's furlough scheme is a way to protect the rich. Coronavirus in Nigeria: The child beggars at the heart of the outbreak. Image copyright Getty Images. 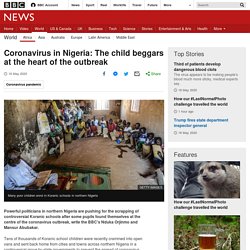 25 Movies Streaming On Netflix That You *And* Your Parents Will Love. Many of us are currently managing a surfeit of free time, and a good number of us are doing so in a shared household. 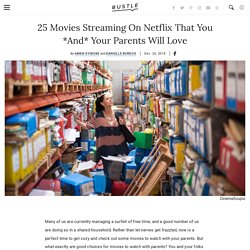 Rather than let nerves get frazzled, now is a perfect time to get cozy and check out some movies to watch with your parents. But what exactly are good choices for movies to watch with parents? You and your folks may have different tastes in genre when it comes to movies, but that doesn’t mean there's no hope of sharing a good flick. These movies streaming on Netflix that your parents will love will definitely have you and them glued to the screen. Rather than spending most of your time scrolling through categories, trying to figure out what movies to suggest for your parents to watch (and, let's face it, ending up in a massive family argument), you can skip straight to a good movie to watch with parents with no fear of awkward moments or boredom. It's almost time for pandemic apologies. Boris Johnson calling for ‘common sense’ is classic Tory gaslighting – he’ll blame the public for his failures to protect us.

As Boris Johnson waffled and blustered his way through defending his bizarre new “stay alert” message this week, he has appealed for us to use “good, solid British common sense” in following the new “eased lockdown” guidelines. 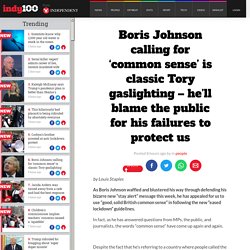 In fact, as he has answered questions from MPs, the public, and journalists, the words “common sense” have come up again and again. Despite the fact that he’s referring to a country where people called the police because KFC ran out of chicken, and where people were recently filmed doing a “socially distanced conga”, the main problem here seems to be that the new guidelines have been drawn up by people who don’t seem to have much common sense at all.