Login. Why you might soon text robots as often as your friends. SAN FRANCISCO (AP) — The robots are coming — to help run your life or sell you stuff — at an online texting service near you. 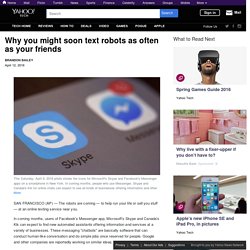 In coming months, users of Facebook's Messenger app, Microsoft's Skype and Canada's Kik can expect to find new automated assistants offering information and services at a variety of businesses. These messaging "chatbots" are basically software that can conduct human-like conversation and do simple jobs once reserved for people. Google and other companies are reportedly working on similar ideas. In Asia, software butlers are already part of the landscape.

When Washington, D.C., attorney Samantha Guo visited China recently, the 32-year-old said she was amazed at how extensively her friends used bots and similar technology on the texting service WeChat to pay for meals, order movie tickets and even send each other gifts. "It was mind-blowing," Guo said. "Bots are the new apps," Microsoft CEO Satya Nadella said last month. 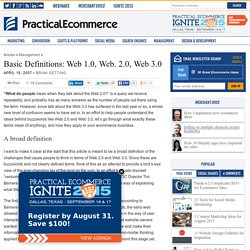 Is a query we receive repeatedly, and probably has as many answers as the number of people out there using the term. However, since talk about the Web 3.0 has surfaced in the last year or so, a whole new level of confusion seems to have set in. In an effort to help people understand the ideas behind buzzwords like Web 2.0 and Web 3.0, let’s go through what exactly these terms mean (if anything), and how they apply to your ecommerce business. A broad definition. What is Web 3.0? Semantic Web & other Web 3.0 Concepts Explained in Plain English. Semantic Web. The Semantic Web is an extension of the Web through standards by the World Wide Web Consortium (W3C).[1] The standards promote common data formats and exchange protocols on the Web, most fundamentally the Resource Description Framework (RDF). 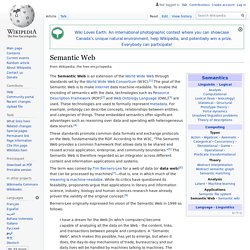 According to the W3C, "The Semantic Web provides a common framework that allows data to be shared and reused across application, enterprise, and community boundaries".[2] The term was coined by Tim Berners-Lee for a web of data that can be processed by machines.[3] While its critics have questioned its feasibility, proponents argue that applications in industry, biology and human sciences research have already proven the validity of the original concept.[4] Example[edit] In the following example, the text 'Paul Schuster was born in Dresden' on a Website will be annotated, connecting a person with its place of birth.

The following HTML-fragment shows, how a small graph is being described, in RDFa-syntax using schema.org vocabulary and a Wikidata ID: What Is Web 3.0? - Definition and Overview. Web 3.0 - definition of Web 3.0, the Semantic Web, BuzzWord from Macmillan Dictionary. Noun[uncountable] a third phase in the evolution of the World Wide Web, based on the idea that the Internet 'understands' the pieces of information it stores and is able to make logical connections between them 'With Web 3.0, it's about the Web becoming smarter, getting to know you better from your browsing history (and all you've contributed to it during Web 2.0) and automatically delivering content to you that is relevant.' Bizcommunity.com 13th May 2010 From its inception in the early 1990s through to the foreseeable future, the World Wide Web is a developing phenomenon, constantly evolving in response to new technologies and the changing expectations of users. 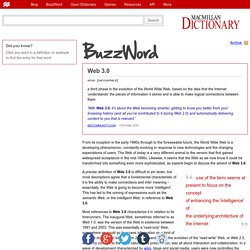 The Web of today is a very different animal to the version that first gained widespread acceptance in the mid-1990s. Use of the term seems at present to focus on the concept of enhancing the 'intelligence' of the underlying architecture of the Internet. Web 3.0: The Third Generation Web is Coming. By Lifeboat Foundation Scientific Advisory Board member Nova Spivack. 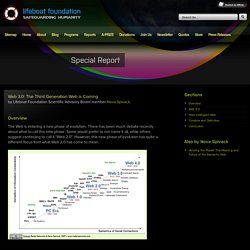 Overview The Web is entering a new phase of evolution. There has been much debate recently about what to call this new phase. Some would prefer to not name it all, while others suggest continuing to call it “Web 2.0”. However, this new phase of evolution has quite a different focus from what Web 2.0 has come to mean. PowerPoint Templates, Transitions & Animations. Web 2.0 Tools. Cool Tools. 21st Century Learning.