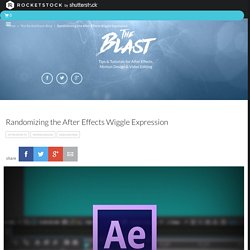 In the following video tutorial, AE expert Mikey Borup shows us how to use the random() function inside of the wiggle expression to get an even more random looking effect. This video was first shared by Mikey Borup on his YouTube channel. Attaching Text to the Ground in After Effects! How To Attach Text In a Moving Object - Adobe After Effect cc Tutorial. Randomizing the After Effects Wiggle Expression. How to track 3d text into your Multi Rotor footage in After Effects. CreativeCOW. The Martian Title Sequence. Maya Tutorial: Glass Shatter Effect. Maya Tutorial: Glass Shatter Effect. Maya - Basic Particle Dissolve Effect. Maya 2016 tutorial : The basics of Bullet physics explained. 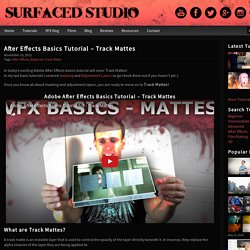 In my last basic tutorials I covered masking and Adjustment Layers so go check them out if you haven’t yet :) Once you know all about masking and adjustment layers, you are ready to move on to Track Mattes! Adobe After Effects Basics Tutorial – Track Mattes What are Track Mattes? Material Library - Arnold for Maya User Guide. Advanced 3D Light Rays in After Effects! Official Opening Credits: Westworld (HBO) Rock'n Rolla (2008) Twister title sequence - Watch the Titles. When title sequence maestro Kyle Cooper was a kid, he used to pick words from the dictionary and make graphic drawings out of them, to illustrate their meaning. 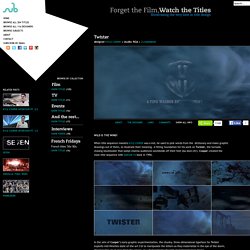 A fitting foundation for his work on Twister, the tornado-chasing blockbuster that swept cinema audiences worldwide off their feet (ba-dum-ch!). Cooper created the main title sequence with Garson Yu back in 1996. In the vein of Cooper’s early graphic experimentation, the chunky, three-dimensional typeface for Twister exploits mid-Nineties state-of-the-art CGI to manipulate the letters as they materialize in the eye of the storm, disappearing all at once from the screen, in a dark’n’stormy flourish of meteorological drama. Projects. Twister (1996) Snatch (2000) The cold open of Guy Ritchie’s hard-nosed crime comedy Snatch is slightly misleading. 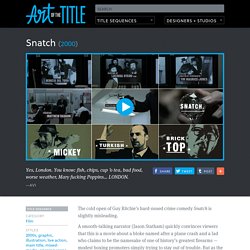 A smooth-talking narrator (Jason Statham) quickly convinces viewers that this is a movie about a bloke named after a plane crash and a lad who claims to be the namesake of one of history’s greatest firearms — modest boxing promoters simply trying to stay out of trouble. But as the opening jewel heist-cum-title sequence gets underway, the audience learns that Turkish and Tommy are but minor players in a topsy-turvy tale of the criminal underworld, a microcosm of thieves, gangsters, and lowlifes.

There’s Sol and Mickey, Vinny and Avi, Franky Four Fingers, Boris the Blade, Bullet-Tooth Tony, and Brick Top. Oh, and a diamond the size of a fist, of course. Setting the board for an intercontinental con, the title sequence introduces the cast as the unlikeliest of robberies goes down and the characters are presented through a series of rip-roaring vignettes and posterized freeze-frames.