15 Things That Emotionally Strong People Don't Do. There is a particular aspect of mental strength that is the deciding factor of whether or not you will have a good life. 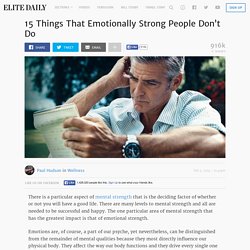 There are many levels to mental strength and all are needed to be successful and happy. The one particular area of mental strength that has the greatest impact is that of emotional strength. Find the best email newsletters. The experience of motherhood for alienated mothers - Finzi-Dottan - 2011 - Child & Family Social Work. Inter-rater agreement of comorbid DSM-IV personality disorders in substance abusers. Personality disorders [PD] represent a major challenge to professionals dealing with substance abusers. 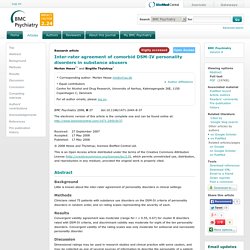 PDs complicate treatment for substance use disorders [1-3]. The PD categories and their criteria sets were developed by committees of experts drawing upon their collective clinical experience and insight. Revisions made to the PDs for later revisions of the diagnostic manuals also followed this committee/clinical-experience approach, and some have argued that the committees responsible for the revision have not sufficiently considered the research that has been conducted on the psychometric properties of PDs [4]. But replacing rationally derived descriptions with empirically derived alternatives may not solve the problem for researchers or clinicians working with substance abusers.

For instance, a study found that the longterm stability and congruence with observer rating was no better for the empirically derived Five Factor Model than for PDs in a sample of substance abusers [5]. Thenostalgiamachine. 55 Ridiculous Thoughts A Girl Has When A Guy Isn't Texting Her Back. An unanswered text message is basically the equivalent of an anxiety attack in 2014. 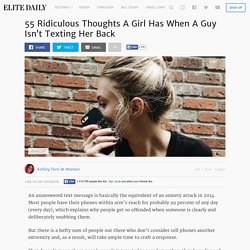 Most people have their phones within arm’s reach for probably 99 percent of any day (every day), which explains why people get so offended when someone is clearly and deliberately snubbing them. But there is a hefty sum of people out there who don’t consider cell phones another extremity and, as a result, will take ample time to craft a response. That doesn’t mean these people aren’t interested in you, but rather, they have lives of their own that aren’t completely pivoted around the use of technological devices. So instead of getting angry at that, maybe you should try to embrace the fact that they would rather be out living their lives than relaying them over social media channels.

Sure, this sounds rational and easy, but when push comes to shove, this isn’t how anyone is thinking. 1. 2. 3. 11 Gross Signs You've Reached Peak Comfort Levels In Your Relationship. When we begin a relationship, we try to be the best version of ourselves. 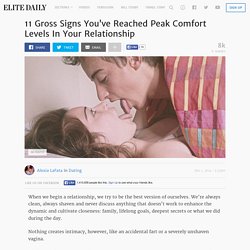 We’re always clean, always shaven and never discuss anything that doesn’t work to enhance the dynamic and cultivate closeness: family, lifelong goals, deepest secrets or what we did during the day. Nothing creates intimacy, however, like an accidental fart or a severely unshaven vagina. Nothing makes you realize how much you love your boyfriend or girlfriend than when their gross morning breath somehow isn’t that gross, or when weight gain in particularly unattractive places doesn’t make you cringe. We’re all human, and we can’t sustain this level of perfection that we all strive to attain in the beginning of our relationships. Eventually, the stuff we worked so hard to keep hidden comes out — literally. Here’s how you know the love is real. 1. The beauty of a comfortable relationship is that you only need to shave if you want to. 2. Surprise! Girls especially like to pretend they don’t fart. Just laugh, OK? 3. 4. 5. 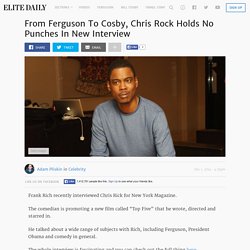 The comedian is promoting a new film called “Top Five” that he wrote, directed and starred in. He talked about a wide range of subjects with Rich, including Ferguson, President Obama and comedy in general. The whole interview is fascinating and you can check out the full thing here. But, if you want to just read some of the choice nugs, we’ve collected those for you down below. On class in America: Oh, people don’t even know. The Psychology Behind Messy Rooms: Why The Most Creative People Flourish In Clutter. All our lives, we’ve been told to “be organized.” 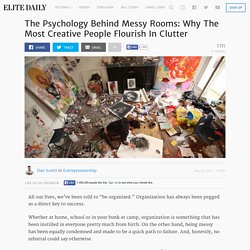 Organization has always been pegged as a direct key to success. Whether at home, school or in your bunk at camp, organization is something that has been instilled in everyone pretty much from birth. On the other hand, being messy has been equally condemned and made to be a quick path to failure.