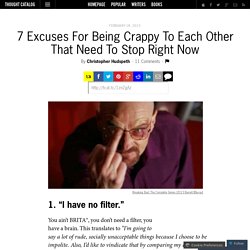 How To Not Be Self-Destructive In The Era Of The #Selfie. It’s raining on a Friday night in San Francisco and you’re partying in a plush five-story townhouse on Market Street, up there in the swank homes at the top of the Castro district. 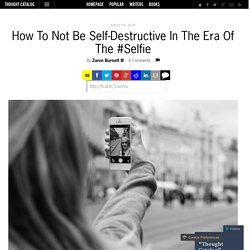 You snort a couple rails of crystal because it’s Friday and these are your friends; twenty minutes later, you chase the crystal with a few rails of coke and you’re flying now, you can feel your brain sizzling like the fried egg in that ancient anti-drug commercial, fully aware that this is your brain on drugs. You hop on your bike and go riding off by yourself into the dark, into the rain, looking to race the devil down the hill. You run every red light, shooting through four lanes of traffic, slicing past cars, inches from rain-slicked buses and erratic box trucks and all that typical city street life that’s pushing along on a weekend night, the young and the old barely paying attention to the road for various reasons as you momentarily place your life in their hands. 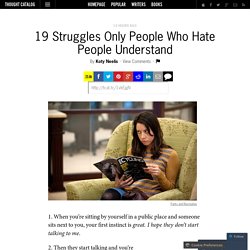 When you’re sitting by yourself in a public place and someone sits next to you, your first instinct is great. I hope they don’t start talking to me. 2. Then they start talking and you’re like, FUCK. What You’ve Been Waiting For, A Way To Tell Whether He’s A Jerk On Sight. The Subtle Art of Not Giving a Fuck. In my life, I have given a fuck about many people and many things. 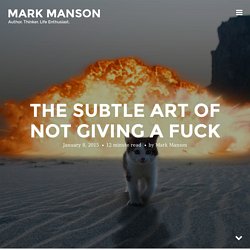 I have also not given a fuck about many people and many things. And those fucks I have not given have made all the difference. People often say the key to confidence and success in life is to simply “not give a fuck.” Indeed, we often refer to the strongest, most admirable people we know in terms of their lack of fucks given. 63 Steps to Survive The Worst Moments of Your Life. Step 1: Slap yourself in the face. 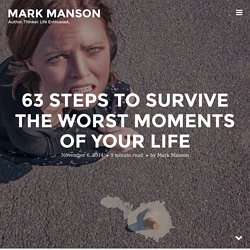 Hard, preferably. Because if a slap in the face seems too painful to consider, then whatever problem you’re dealing with right now is really not that big of a problem. You Already Have Everything You Need. We all have needs, both physical and emotional. 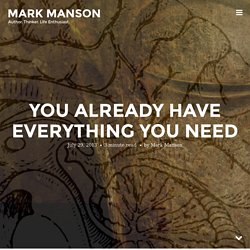 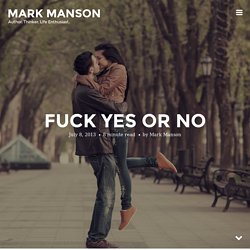 There’s a grey area in dating many people get hung up on — a grey area where feelings are ambiguous or one person has stronger feelings than the other. This grey area causes real, tangible issues. As a man, a huge question is often whether to be persistent and continue pursuing a woman even when she seems lukewarm or hot/cold on your advances. For women, a common question is what to do with men who make their feelings ambiguous. How Do You Measure Your Life? In the early 1980s, a talented young guitarist was kicked out of his band. 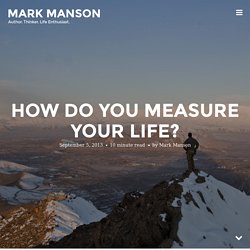 The band had just been signed to their first record contract, and they were preparing to record their first album. A week before recording began, they fired the guitarist. There was no warning, no discussion. 12 Stupid Things People Care About Way Too Much. What would a month in blogging be without yet another obligatory “X Things that Blah Blah Blah” post for all of you and your friends to share? 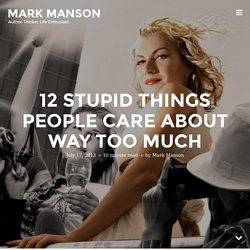 Because reading these days is just too boring unless it’s put into an easily-digestible list form. Well, good news: I’ve heard your attention deficit disorder calling and so I have responded: 12 Stupid Things People Care Too Much About. Now shut up and go share it on Facebook or something. 1. Whose Fault it is. Sex and Our Psychological Needs. Last week’s don’t-fuck-up-your-dating-life trilogy (here, here and here) was received with a lot of enthusiasm, much more than I expected.

I even received a number of emails from men who, within days, implemented some of the principles in those posts by ending toxic relationships they had been maintaining with women, or finally establishing some solid boundaries. But there was a little bit of criticism as well. And I have to admit I was taken aback by it at first. I’m used to criticism, but the lesson of these posts seemed to me so self-evident that I was surprised people were arguing against it. 20 Paradoxes That Are True. Some of the most important truths in life are contradictory on the surface.

They seem like impossibilities, yet experience proves them to be obvious over and over again. It isn’t until you look a bit deeper, beneath the surface contradictions, that the real grains of wisdom emerge. Below are 20 paradoxes I’ve come across which are, paradoxically, still true: 1. The more you hate a trait in someone else, the more likely you are avoiding it in yourself. 2. 3. 4.

Your Two Minds. Close your eyes. Wait, don’t close them yet. Finish reading this paragraph, then close them. OK, close your eyes and try to think about nothing for 30 seconds. The Guide to Strong Boundaries. This post is long overdue. Since I wrote Models: Attract Women Through Honesty and mentioned the importance of maintaining strong personal boundaries, people have been asking me what boundaries actually are, what they look like, how to build them and maintain them, do they help that much, are they that important, do they stop your girlfriend from farting too much in her sleep, where are my keys, have you seen my keys, where are my damn keys?

PSA: Setting strong personal boundaries are not a cure-all for your relationship woes (or your lost keys). In fact, they’re more of a side effect of having a healthy self-esteem and a general low level of neediness with people around you. Boundaries work both ways: they create emotional health and are created by people with emotional health. Why I'm Wrong About Everything (And So Are You) Five hundred years ago cartographers believed California was an island. Doctors believed that slicing your arm open and bleeding everywhere could cure disease. Scientists believed fire was made out of something called phlogiston. Women believed rubbing dog urine on their face had anti-aging benefits. And astronomers believed the sun revolved around the earth. The Vulnerability Primer.

I’ve talked a lot about the benefits of vulnerability and how we can implement it in our lives to make deeper connections and ultimately have more satisfying relationships. Interestingly, I get a lot of questions surrounding the same issues about vulnerability, so I figured I’d try to clarify myself here, once and for all. As a quick refresher, vulnerability is consciously choosing to NOT hide your emotions or desires from others. This can be as simple as complimenting someone on how good they look, approaching an attractive stranger you don’t know, establishing clear and strong boundaries, or expressing your undying love to someone. Vulnerability is the cornerstone concept of my book Models: Attract Women Through Honesty.

The benefits to vulnerability are massive, although not always pleasantly achieved. And no, you don’t have to be unbelievably good-looking, or rich, or whatever. Living With Someone Is The Hardest (And The Best) Thing You Can Do. 6 Toxic Relationship Habits Most People Think Are Normal. How To Support Your Significant Other, Even When You Don’t Want To.

33 Experiences We Don’t Have English Words For Yet. When Shit Hits The Fan. Psychotherapy. Are You An Emotional Vampire? Love is Biased, Not Blind. I am still amazed at how terrible I am at evaluating my own romantic and sexual situations objectively. Attachment Theory. Attachment theory is an area of psychology that describes the nature of emotional attachment between humans. The Levels of Eye Contact. Compatibility and Chemistry in Relationships. The Zen Dilemma. Pdf-0009-taking-charge.pdf. Thoughtcatalog. View topic - Confronting a Narcissist With His Own Behavior. Caesars Entertainment CEO Loveman steps down. Social Casino Tracker - February 2015. 5 Banking Trends to Watch in 2015 - NerdWallet. 5 Questions to Ask Your Credit Card Company in 2015 - NerdWallet.

Michelle Elana shared photos from 3 years ago. The Annual Apple. 19 Photos That Prove Old People Don't Give A F*ck What They Wear. The Five Stages of an Argument. The Three Parts of a Meaningful, Heartfelt Apology. Personality Typing. "Modern" Psychology. Narcissists Are Always in Attack Mode. SociopathLife.Com. Blogs on NPD. Psychological Aspects of NPD. Membership Login. 20 Traits of Malignant Narcissistic Personality Disorder. 15 Signs You’re Trying To Get Your Shit Together But Like, It’s Hard.

Be Alone. How to Write Stories With Werdsmith. Healing from Narcissistic Mothers. What Is Codependency?