HSBC: Young Urban Males Will Be Key to Luxury Market Growth. Despite lagging demand for luxury goods of late, things are looking up, and we owe that all to the Yummy. 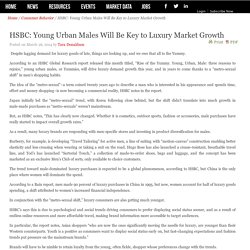 According to an HSBC Global Research report released this month titled, “Rise of the Yummy. Luxury's next great hope: YUMMY's. While the rise of the YUMMY is global, the trend is emerging first in Japan and South Korea. 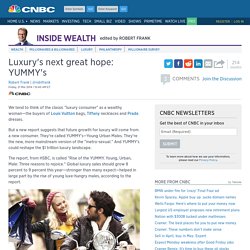 "Whether it is cosmetics, outdoor sports, fashion or accessories, male purchases have really started to impact overall growth rates," the report said. "Men-specific luxury stores are one of the ways in which brands have adapted to this new type" of consumer. (Read more: Why wealthy are fleeing New Jersey) Men already account for 40 percent of luxury sales, according to consultancy Bain. But there are three main reasons the YUMMY could dominate even more sales. Richard Cope, a researcher from Mintel, the global market research firm, said in the report that, "Taking pride and taking greater confidence from maintaining a well-groomed appearance now defines what it is to be 'a man' in today's society. (Read more: The private jet market's haves and have nots) 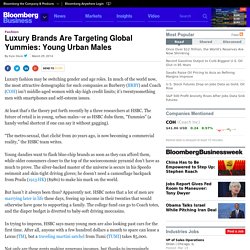 In much of the world now, the most attractive demographic for such companies as Burberry (BRBY) and Coach (COH) isn’t middle-aged women with sky-high credit limits; it’s twentysomething men with smartphones and self-esteem issues. At least that’s the theory put forth recently by a three researchers at HSBC. Yummies: young, urban males obsessed with personal grooming and health. 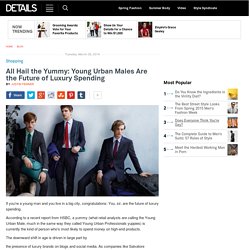 According to a recent report from HSBC, a yummy (what retail analysts are calling the Young Urban Male, much in the same way they called Young Urban Professionals yuppies) is currently the kind of person who's most likely to spend money on high-end products. The downward shift in age is driven in large part by the presence of luxury brands on blogs and social media. As companies like Salvatore Ferragamo, Coach, and Louis Vuitton get more visible in the digital space—and therefore spend more time in front of its typically young residents—luxury consumers are going to get younger and younger.

Are You a ‘Yummy’? Meet the “Yummy”: the Young, Urban Male. In what seems to be an almost direct response to the recent advent of normcore, the “yummy” is the latest neologism aimed at describing an emerging cultural subset: in this case, young, urban males who like to look good and indulge in luxury goods (so, basically, an offshoot of the metrosexual). 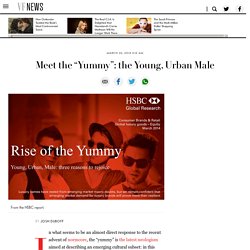 But before we even dig further into what it “means,” we feel it necessary to emphasize that, from a strictly linguistic standpoint, this name ain’t great! First of all, “yummy” is already a word—never a great idea to try to coin a nickname where you’re going to have competition. Secondly, it’s based on an acronym for “Young Urban Male,” which is . . . confusing. Shouldn’t the term just be “YUMs,” in that case?! Lastly, we have no clue how to use it in a sentence.

Anyway, we probably shouldn’t be too shocked that this nomenclature seems problematic as the masterminds of this new label are . . . Metrosexual man bows to red-blooded übersexuals. It's good news for traditional American men.

The metrosexual is dead: long live the übersexual. After dominating US style and fashion for several years, the ideal of the modern male as someone who cared about fashion and skin care as much as a woman did is about to be swept aside by a return to old-fashioned, masculine values: fine wines, cigars and red-blooded heterosexuality. Ubersexual: The New Masculine Ideal? The authors who popularized the term "metrosexual" say a new type of masculinity is taking hold.

WebMD Archive The American Dialect Society named "metrosexual" the "word of the year" for 2003 after marketing consultant Marian Salzman helped popularize it. 'Its a metrosexual thing': A discourse analytical examination of masculinities. Abstract The recent critical focus on men and masculinities purports challenges to the dominance of ‘hegemonic’ or idealised dominant masculine scripts (Connell, 1995).

Men’s increasing consumption of image enhancement products and especially facial. Skin, Culture and Psychoanalysis - Sheila L. Cavanagh - Google Books. Hoi An, Vietnam: the cheapest place in the world for custom suits. Hoi An, Vietnam is home to some of the world’s cheapest custom tailored suits. 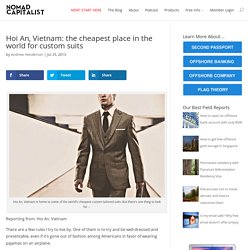 But there’s one thing to look for… Reporting from: Hoi An, Vietnam There are a few rules I try to live by. One of them is to try and be well-dressed and presentable, even if it’s gone out of fashion among Americans in favor of wearing pajamas on an airplane. To me, there’s nothing quite like a great suit.