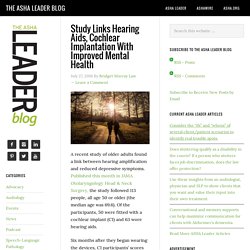 Published this month in JAMA Otolaryngology Head & Neck Surgery, the study followed 113 people, all age 50 or older (the median age was 69.6). Of the participants, 50 were fitted with a cochlear implant (CI) and 63 wore hearing aids. Six months after they began wearing the devices, CI participants’ scores on the Geriatric Depression Scale dropped by 31 percent.

Hearing aid participants’ scores were 28 percent lower. After a year, that number increased slightly for CI participants, and decreased slightly for those wearing hearing aids. Across both types of devices, recipients who initially scored highest on depressive symptoms showed the most improvement after amplification treatment. The observational study was led by Janet S. Getting Started Canning Guide, Tips & How-To. What is Canning? 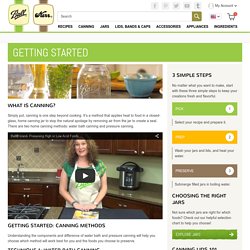 Simply put, canning is one step beyond cooking. It’s a method that applies heat to food in a closed-glass, home canning jar to stop the natural spoilage by removing air from the jar to create a seal. There are two home canning methods: water bath canning and pressure canning. Getting Started: Canning Methods. 15 Canning Tips for Preppers. Canning is an essential skill for preparedness and survival. 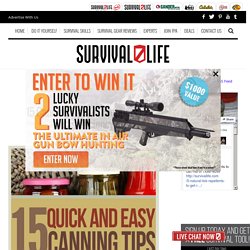 You can save money and store food that will last a long time. When faced with any SHTF scenario, you can rest assured that you will have plenty to eat as long as you plan ahead. We have already covered the basics of canning and the two most common methods. Must-Have Canning Supplies: Everything You Need to Can at Home. If you are not familiar with the water bath canning method watch our water bath canning video workshop. 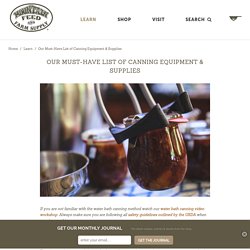 Always make sure you are following all safety guidelines outlined by the USDA when canning anything. Canning is Good, Canning is Great. There’s something special about a fresh jar of homemade jam in the winter - toasting some fresh bread, sipping a hot beverage and heading out to meet the day. Or what about biting into a crispy pickle from those extra cucumbers or green beans you harvested over summer? A Snowstorm And Another Run On The Grocery Stores. January 21, 2016, by Ken Jorgustin It constantly amazes me how often this happens – when there is a prediction of a major snowstorm, at the last minute there is a run on the grocery stores for bread, milk, eggs, and beer (and whatever else). 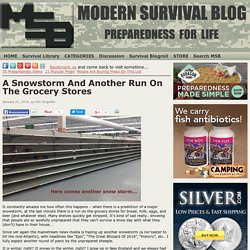 Many shelves quickly get stripped. It’s kind of sad really… knowing that people are so woefully unprepared that they can’t survive a snow day with what they (don’t) have in their house… Since yet again the mainstream news media is hyping up another snowstorm (a nor’easter to hit the mid-Atlantic), with headlines like “Epic”, “The Great Blizzard Of 2016”, “Historic”, etc.. Urban Survival Guide, Tips and Urban Survival Skills. List of Speakers & Background. Survival Website & Prepper Blog.

Urban HomesteadUrban Homestead. 10 steps to save money. We chose to downsize our lives, though in many ways we are living better than we did before. 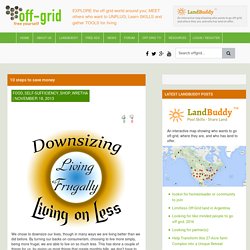 By turning our backs on consumerism, choosing to live more simply, being more frugal, we are able to live on so much less. This has done a couple of things for us, by giving up most things that create monthly bills, we don’t have to worry about falling behind and losing things or going into bankruptcy. The 5 Greatest Threats To Off-Grid Living. Image source: offgridworld.com It’s nothing short of ironic that this nation, which was founded, explored, and made great by adventurous and self-reliant people, has now become a haven for those who insist on being cradled and sheltered by convenience. 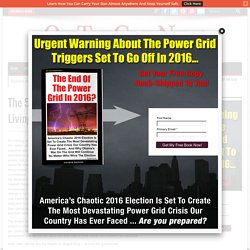 Responding to the demand that this has created, the government has increasingly made it more difficult to be self-reliant and now seems thoroughly dedicated to preventing anyone from taking care of themselves and their families. LOOK: Going off the grid. If Steven Thompson were the owner of his home and was looking to get a jump on the red-hot real estate market this spring, here’s what his listing teaser might look like: Check out this lovely charmer a mere stone’s throw north of Lawrence. 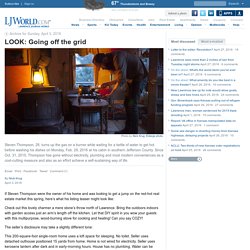 Bring the outdoors indoors with garden access just an arm’s length off the kitchen. Advantages to Living Off-the-Grid. When one starts to consider going off the grid, it needs to be asked whether or not it’s worth it? 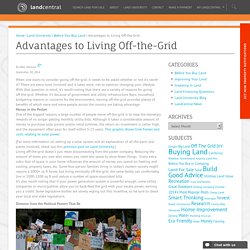 There are extra costs involved and it takes work, not to mention changing your lifestyle. With that question in mind, it’s worth noting that there are a variety of reasons for going off-the-grid. Whether it’s because of government and utility infrastructure fears, household budgeting reasons or concerns for the environment, moving off-the-grid provides plenty of benefits of which more and more people across the country are taking advantage.Money in the Pocket One of the biggest reasons a large number of people move off-the-grid is to reap the monetary rewards of no longer getting monthly utility bills. Although it takes a considerable amount of money to purchase solar panels and/or wind turbines, the return on investment is rather high, and the equipment often pays for itself within 5-15 years. This graphic shows time frames and costs relating to solar power.

How To Stand Out At A Trade Show. Think of the last time you were on the midway at a state fair. 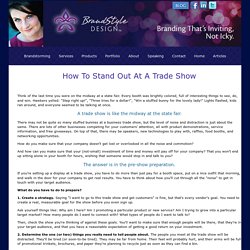 Every booth was brightly colored, full of interesting things to see, do, and win. Hawkers yelled: "Step right up! " 20 Posts to Help You Get Noticed at Trade Shows. All around the world, people attend trade shows specific to their industries. For many companies, trade shows can help new people find them and bring in more clients. So what’s the hardest thing about having your company booth at a trade show? Getting noticed and emerging from the crowd of companies trying to do the same thing. Trade Show Promotions: Where Do You Spend Your Dollars? More than just about anything else, exhibitors want to know how to improve their trade show promotions in order to get more traffic (and more of the right traffic) to their booth. It’s a big deal. And you can help. Here’s how. 20 Posts to Help You Get Noticed at Trade Shows. B2B Inbound Marketing Agency. The Prepper Urban Dictionary. 7 Ways to Get the Most Out of Exhibiting at a Trade Show.

This story first appeared in the September 2014 issue of Entrepreneur. To receive the magazine, click here to subscribe. Join Entrepreneur and today's most influential business innovators in Denver, May 4. Register Now » Since debuting their cloud-based coordination and communication platform for senior-care providers at a regional trade show in 2012, Asif Khan and Fahad Aziz have raised $2.5 million, won multiple awards and acquired more than 100 U.S. facilities as customers. Trade Show Checklist: How To Successfully Sell Your Product At Trade Shows. With a physical product, there are several ways to meet customers and market your business.

Survivalism. Movement of individuals or households preparing for emergencies and natural disasters Use of the term survivalist dates from the early 1960s.[2] History[edit] 1930s to 1950s[edit] The origins of the modern survivalist movement in the United Kingdom and the United States include government policies, threats of nuclear warfare, religious beliefs, and writers who warned of social or economic collapse in both non-fiction and apocalyptic and post-apocalyptic fiction.

[citation needed] The Great Depression that followed the Wall Street Crash of 1929 is cited by survivalists as an example of the need to be prepared.[4][5] 1960s[edit] The increased inflation rate in the 1960s, the US monetary devaluation, the continued concern over a possible nuclear exchange between the US and the Soviet Union, and perceived increasing vulnerability of urban centers to supply shortages and other systems failures caused a number of primarily conservative and libertarian thinkers to promote individual preparations. Prepper paradise: WNC survivalists prize community, readiness. Why Urban Preppers Should Learn Basic Homesteading Skills. USA Prepper Expos, Prepper Shows, & Prepper Tradeshows. What’s Stopping You From Going Off Grid NOW? Trade Show Checklist: How To Successfully Sell Your Product At Trade Shows. Untitled. ‘Preppers’ network, share tips at Raleigh expo. Homesteaders and Preppers: We Are All On the Same Team. Cheap by Choice: When Frugality Means Freedom.