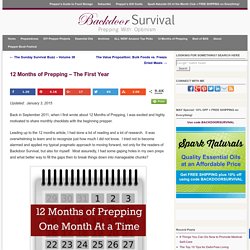 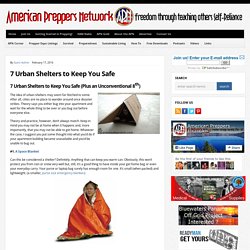 After all, cities are no place to wander around once disaster strikes. Theory says you either bug into your apartment and wait for the whole thing to be over or you bug out before everyone else. Theory and practice, however, don’t always match. Keep in mind you may not be at home when it happens and, more importantly, that you may not be able to get home. . #1. Can this be considered a shelter? #2. Sure, there’s also the possibility of you finding a large cardboard to fit in, but the most likely scenario is that you’ll need to assemble several of them together. American Preppers Network - National family survival and preparedness organization : American Preppers Network. 7 Urban Survival Mistakes That Could Get You Killed. A while back I wrote about 9 urban survival skills that could save your life. 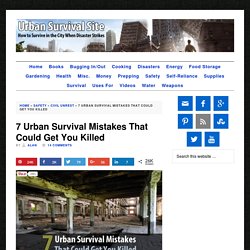 Not having these skills could literally get you killed, but there are many urban survival mistakes that could also get you killed. Here are seven: 1. Bragging About Your Preps – Sometimes this is hard to resist. You spend a lot of time thinking about prepping, saving up, looking for good deals, gathering supplies, etc., and it’s hard not to be proud of your efforts. Urban Survival Guide, Tips and Urban Survival Skills. 20 Common Survival Myths. You’ve probably heard the myth about Twinkies having preservative properties that make them last for decades. 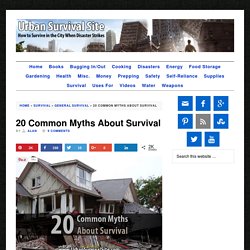 No one knows for sure where this legend began, but it probably has to do with the fact that even old Twinkies seem fresh and spongy. In reality, Twinkies have a shelf life of about one month. Another reason myths like this abound is because of Hollywood. Many survival myths either begin with or are perpetuated by unrealistic movies. USurviveAll.com. Watch Highlight Reel of Obama's Most Embarrassing Moments. President Obama attended the final White House Correspondents' Dinner of his presidency on Saturday night. 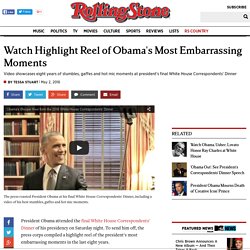 To send him off, the press corps compiled a highlight reel of the president's most embarrassing moments in the last eight years. The montage featured the typically cool, composed Obama tripping over both stairs and words, erroneously admitting he was Muslim, missing basketball shots and mixing up members of the press mid-interview: calling Matt Lauer "Tim," David Gregory "Matt," and repeatedly referring to CBS News' Major Garrett as "Garrett. " The press corps needled Obama over his geographical gaffes (mispronouncing Massachusetts, boasting of visiting all 57 states), trotted out his most famous hot mic moments (when he called Kanye West a "jackass," when he told then-Russian president Dmitry Medvedev he'd have "more flexibility" after his reelection) and recalled some of his most enduring fashion faux pas (the mom jeans, the tan suit).

Don't waste any pity on Obama, though. Marketing Scents. At Home Canning For Beginners and Beyond: DVD. This is the solution to everyone and anyone who has had any reservations about canning but especially pressure canning. 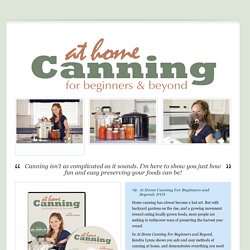 When I started pressure canning it was honestly a bit scary, we have all heard the horror stories, and I wanted to make sure that I was doing everything right. I looked high and low for all the information I could get my hands on about pressure canning and sadly I didn't find a lot, I could hardly find books on it let alone a good dvd!! I moved forward with my pressure canning adventure hesitantly and very cautiously and even though I had my All American pressure canner I still didn't use it very much, I just lacked confidence. USurviveAll.com. USAPrepares.com is the largest and most comprehensive Get Prepared EXPO in the United States - USA Prepares.com with Vincent Finelli. News & Observer. They came to prepare, many of them for the end of life as we know it. 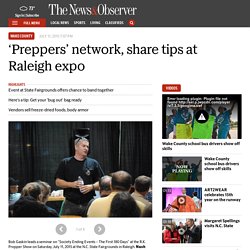 By sitting through seminars and making checklists of what they’ll need during the apocalypse, hundreds sought to boost their survival rating at the first Prepper Expo at the N.C. State Fairgrounds on Saturday. But the expo, which will continue Sunday in the Jim Graham Building, also proved to be a networking event. “Preppers,” the term commonly used for those preparing for life after things fall apart, had an opportunity to find others to band together with during a society-altering event. After making it known he was recruiting others to his Greensville-based prepper group, David Mull found himself surrounded by several interested families. Mull, whose group plans to gather at a “site in the country” when the time comes, said survivors will have to stick together.

“I’ve tried to be prepared for most of my life, but I started seeing the signs coming together in the past couple of years,” Mull said. R.K. The R.K.