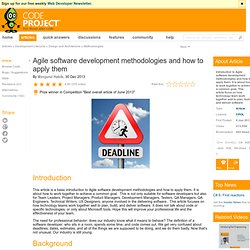 It is about how to work together to achieve a common goal. This is not only suitable for software developers but also for Team Leaders, Project Managers, Product Managers, Development Managers, Testers, QA Managers, QA Engineers, Technical Writers, UX Designers, anyone involved in the delivering software. This article focuses on how technology teams work together well to plan, build, and deliver software. It does not talk about code or specific technologies, or only about Microsoft tools.

The need for professional behavior: does our industry know what it means to behave? Background Winston Royce's Waterfall Model "From the 1970 IEE paper "Managing the Development of Large Software Systems" There are two essential steps common to all computer program developments, regardless of size or complexity. Step 1: Program Design Comes First Step2: Document the Design. Breaking News Is the Top Reason for Mobile News App Usage. Less than four in 10 US consumers use mobile news apps, but those who do are likely keeping them on hand to stay up to date with unexpected events.

In a December 2013 study by StepLeader, 42% of US mobile news app users said that breaking news was the most important news app category. This was the top response by a long shot—just 18% of respondents cited second-place national news—and it makes sense when one considers that mobile devices allow users to keep up with the latest news whenever and wherever they go. But getting breaking news via smartphone apps was far more popular than on tablets, likely due to the former being more portable. More than four in 10 respondents said they used smartphone apps to get breaking news alerts, compared with just 20.0% who said the same for tablets.

Some consumers may be using news apps, but that doesn’t mean they’re paying for them. StepLeader found that this wasn’t likely to change anytime soon. Lightning Grader. Success of iPhone app boggles Coralville software firm. Dave DeWitte Published: March 10 2010 | 4:59 pm - Updated: 30 March 2014 | 8:52 pm in Launching a top- selling educational iPhone app has been a learning experience for a Coralville company. 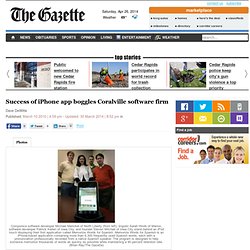 “Memorize Words for Spanish” from Componica became one of the top five iPhone education software applications at the end of February, and remains in the top 25. Paid downloads of the $6.99 language app from Apple’s iTunes store soared to 700-800 per day at the peak, Componica co-founder Steven Mitchell said. That’s about the number of downloads it sold in one month a year ago. Mitchell said Componica has learned some lessons about the iPhone app market since it introduced the Spanish learning app, but still isn’t sure if lady luck didn’t play a hand in the product’s success. Componica lowered the price of the app and stepped up its marketing game with the help of a consultant. “It goes through this strange feedback loop,” Mitchell said. “We’re all using Google Androids,” Mitchell said. 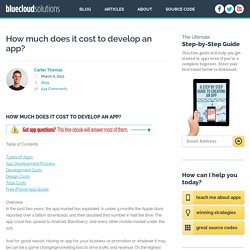 In under 9 months the Apple store reported over a billion downloads, and then doubled that number in half the time. The app craze has spread to Android, Blackberry, and every other mobile market under the sun. And for good reason. The good news? Let’s talk about what goes into getting an app developed. Types of Apps You Can Develop There are many different kinds of apps you can develop. Basic table functionality – think about this as a hierarchy: opening screen has big topics and you click one and you now have a set of new lists to click on. The type of app you want to develop may change based on how much content you have and how much control you want to have over the entire process. App Development Process 1. This is the first genesis of where the app will be going and one step after “I want an app.” 2. 3.