Vinegar Syndrome... Is your Microfilm Archive in a pickle? » nextScan. Younger Americans and Public Libraries. How those under 30 engage with libraries and think about libraries’ role in their lives and communities Younger Americans—those ages 16-29—especially fascinate researchers and organizations because of their advanced technology habits, their racial and ethnic diversity, their looser relationships to institutions such as political parties and organized religion, and the ways in which their social attitudes differ from their elders. 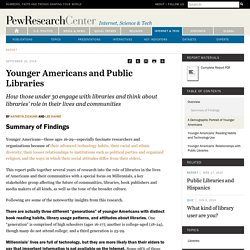 This report pulls together several years of research into the role of libraries in the lives of Americans and their communities with a special focus on Millennials, a key stakeholder group affecting the future of communities, libraries, book publishers and media makers of all kinds, as well as the tone of the broader culture. State Historical Society of Iowa. Records come in a variety of shapes, sizes, and types, such as hand-copied ledger books, newspaper files, and various forms created over time to record information for licenses, court orders, and permits. 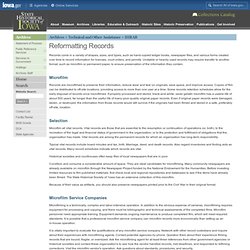 8 Signs You Need a Space Planning Solution. Historic Document Conversion. Content audit guide and template. Content audits are tedious and time-consuming, but necessary if you want to take stock of the content you have on your site. 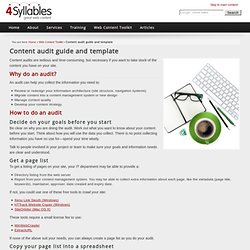 Why do an audit? An audit can help you collect the information you need to: Review or redesign your information architecture (site structure, navigation systems)Migrate content into a content management system or new designManage content qualityDevelop your content strategy. Margaret Atwood's new work will remain unseen for a century. Depending on perspective, it is an author's dream – or nightmare: Margaret Atwood will never know what readers think of the piece of fiction she is currently working on, because the unpublished, unread manuscript from the Man Booker prize-winning novelist will be locked away for the next 100 years. 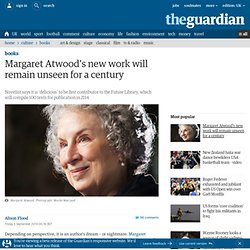 Atwood has just been named as the first contributor to an astonishing new public artwork. The Future Library project, conceived by the award-winning young Scottish artist Katie Paterson, began, quietly, this summer, with the planting of a forest of 1,000 trees in Nordmarka, just outside Oslo. It will slowly unfold over the next century. Roots and Branches: Aid on historical newspapers helps genealogists. Lebanon Daily News Updated: 08/26/2014 10:37:11 AM EDT Aid on historical newspapers helps genealogists I was privileged to sit in on a meeting a couple of weeks ago that wrapped up the Pennsylvania Digital Newspaper Project. 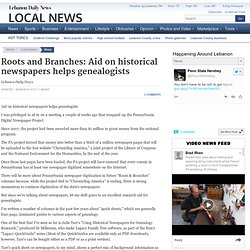 Since 2007, the project had been awarded more than $1 million in grant money from the national program. The PA project turned that money into better than a third of a million newspaper pages that will be uploaded to the free website "Chronicling America," a joint project of the Library of Congress and the National Endowment for the Humanities, by the end of the year. Once those last pages have been loaded, the PA project will have ensured that every county in Pennsylvania has at least one newspaper digitized somewhere on the Internet. Digital States Survey 2014 Results. September 3, 2014 - In its comprehensive 2014 Digital States Survey, e.Republic’s Center for Digital Government evaluated the digital technology practices of all 50 states, assigning each state a grade based on quantifiable results in better serving citizens and streamlining operations. 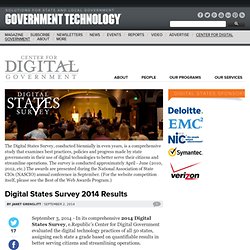 Overall, since the last biennial survey in 2012, grades improved in 21 states, declined in 12 and stayed even in 17. Eight states earned top grades, with Connecticut, Georgia, Missouri and Virginia moving up to A designations and Michigan, Ohio, Pennsylvania and Utah maintaining their A marks from 2012. Connecticut, rising from a C to A- and Idaho, from a D to a B, were the most improved states. The survey evaluated states based on a set of criteria which included actions supporting state priorities and policies to improve operations or services, hard- and soft-dollar savings/benefits, progress since the last survey, innovative solutions, and effective collaboration. 2014 Digital States Survey Grades: 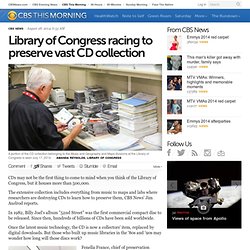 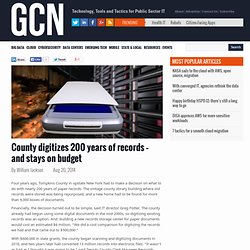 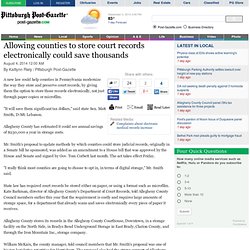 "It will save them significant tax dollars," said state Sen. Butler County takes steps to preserve judicial records. County Prothonotary Glenna Walters has commissioned an inspection to determine how many government records saved on 35mm film may have to be rescued from the passage of time. 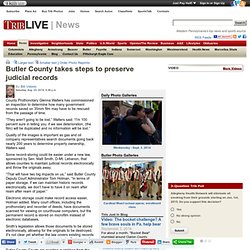 “They aren't going to be lost,” Walters said. “I'm 100 percent sure in telling you, if we see deterioration, (the film) will be duplicated and no information will be lost.” Quality of the images is important as gas and oil company representatives search documents going back nearly 200 years to determine property ownership, Walters said.

If you would like a quote for the conversion of your records, you can click here to request an estimate or call us at 866-609-4DFS (4337). How will we be able to access the rolls once they have been converted? We can provide your scanned images back to you in any format you prefer. Option 1 – Roll Level Indexing We would scan each roll and place the images from that roll into a folder or multi-page image (PDF or TIFF). Laura Ingalls Wilder memoir to give gritty view of prairie life. Laura Ingalls Wilder penned one of the most beloved children's series of the 20th century, but her forthcoming autobiography will show devoted "Little House on the Prairie" fans a more realistic, grittier view of frontier living. "Pioneer Girl: The Annotated Autobiography" -- Wilder's unedited draft that was written for an adult audience and eventually served as the foundation for the popular series -- is slated to be released by the South Dakota State Historical Society Press nationwide this fall.

This latest round of grants marks a 1,000-grant milestone since the grants, funded by the Legacy Amendment, began in 2009. Grants are helping organizations in every Minnesota county preserve and share history, including Isanti County where an arson fire devastated the local historical society. Visit to see a video about the damage and recovery efforts. “This 1,000-grant milestone is significant. Www.culturalaffairs.org/newsroom/press-releases/2014/releases/pr-historicpreservation-07242014.pdf. A night at the museum? Nah, but Smithsonian needs volunteers for digitization project.

The Smithsonian is looking for volunteers to help with its digitization project. The Smithsonian's collections hold a large amount of handwritten documents, which need to be digitized, a task that computers can't manage. National Association of Government Archives and Records Administrators - Home Page. Archives and Records Mgt. Association. Roles of a Document Manager. What are the Top Ten Document Compliance Manager Job Description Responsibilities? Breaking News, U.S., World, Weather, Entertainment & Video News.