GPS for the visually impaired. Since the Global Positioning System (GPS) was introduced in the late 1980s there have been many attempts to integrate it into a navigation-assistance system for blind and visually impaired people. 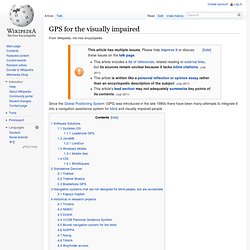 Software Solutions[edit] Symbian OS[edit] Loadstone GPS[edit] The Loadstone project is developing an open source software for satellite navigation for blind and visually impaired users. The software is free and runs currently on many different Nokia devices with the S60 platform under all versions of the Symbian operating system. The Loadstone developers, who are blind, are from Vancouver, Glasgow, and Amsterdam.

Lodestone is the name of a natural magnetic iron that was used throughout history in the manufacturing of compasses. Loomis-presence98.pdf. Loadstone GPS - Satellite Navigation for blind mobile phone users. Global device positioning using Wi-Fi and cell id location databases. If You Have a Smart Phone, Anyone Can Now Track Your Every Move. Location services company Navizon has a new system, called Navizon I.T.S., that could allow tracking of visitors in malls, museums, offices, factories, secured areas and just about any other indoor space. 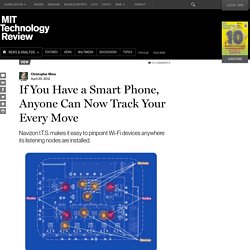 It could be used to examine patterns of foot traffic in retail spaces, assure that a museum is empty of visitors at closing time, or even to pinpoint the location of any individual registered with the system. But let’s set all that aside for a minute while we freak out about the privacy implications. Most of us leave Wi-Fi on by default, in part because our phones chastise us when we don’t. The Problem with Mobile Phones. Mobile phones have become ubiquitous and basic communications tools—now used not only for phone calls, but also for accessing the Internet, sending text messages, and documenting the world. 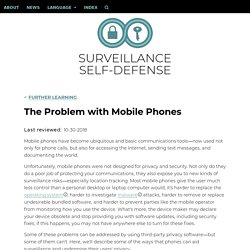 Unfortunately, mobile phones were not designed for privacy and security. Not only do they do a poor job of protecting your communications, they also expose you to new kinds of surveillance risks—especially location tracking. Most mobile phones give the user much less control than a personal desktop or laptop computer would; it's harder to replace the operating system , harder to investigate malware attacks, harder to remove or replace undesirable bundled software, and harder to prevent parties like the mobile operator from monitoring how you use the device.

Some of these problems can be addressed by using third-party privacy software—but some of them can't. Location Tracking Anchor link The deepest privacy threat 1. About a user (in real-time or as a matter of historical record). Hal.archives-ouvertes. 87_Talking.pdf. IJSRD International Journal for Scientific Research and Development. GPS & GSM based Voice Alert System for Blind Person (IJSRD/Vol. 1/Issue 9/2013/0056) All rights reserved by www.ijsrd.com Project Description A. 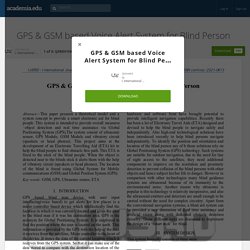 Above fig shows that this project mainly consists of eight parts namely Micro controller, GPS receiver, GSM, Ultrasonic sensor, HM 2007, APR 9600, Keypad and LCD display. The software in this project comprises of ‘embedded c’ coding which is used in the micro controller and visual basic 6 is used for receiving the GPS value in the system. Microcontroller The Microcontroller used in this system is ATMEGA 164PV since it is necessary to provide the dual serial communication which is possible using this controller. GSM and GPS Modules The Global Positioning System (GPS) and Global System for Mobile communications (GSM) are interfaced to the microcontroller to detect the blind person location .The proposed architecture consists of a GPS signal receiver and GSM, vibratory circuitry connected to Microcontroller. 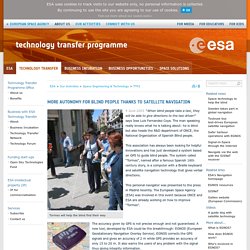 Says Jose Luis Fernandez Coya. The man speaking really knows what he is talking about: he is blind but also heads the R&D department of ONCE, the National Organization of Spanish Blind people. This association has always been looking for helpful innovations and has just developed a system based on GPS to guide blind people.

This personal navigator was presented to the press in Madrid recently. The personal navigator will provide routing and guidance information The accuracy given by GPS is not precise enough and not guaranteed. EGNOS is transmitted to the ground via geostationary satellites, so sometimes signals are blocked by buildings. Tormes can be carried over the shoulder. Navatar: Navigating Blind Users in Indoor Spaces using Tactile Landmarks. Indoor navigation systems for users who are visually impaired typically rely upon expensive physical augmentation of the environment or expensive sensing equipment; consequently few systems have been implemented. 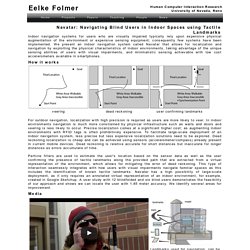 We present an indoor navigation system called Navatar that allows for localization and navigation by exploiting the physical characteristics of indoor environments, taking advantage of the unique sensing abilities of users with visual impairments, and minimalistic sensing achievable with low cost accelerometers available in smartphones. How it works For outdoor navigation, localization with high precision is required as users are more likely to veer. In indoor environments navigation is much more constrained by physical infrastructure such as walls and doors and veering is less likely to occur. STEP HEAR Navigation System for the Blind.