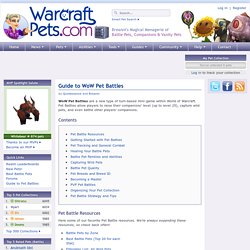 Pet Battles allow players to raise their companions’ level (up to level 25), capture wild pets, and even battle other players' companions. Contents Pet Battle Resources Here some of our favorite Pet Battle resources. We're always expanding these resources, so check back often! You can calculate the battle stats of any pet (at any level and rarity) by checking the "Battle Info" tab in the pet profiles found right here on WarcraftPets. Getting Started with Pet Battles To get started on becoming a pet battling master, seek out a Battle Pet Trainer in one of the lower level starting zones or in Stormwind or Orgrimmar. Trainers will teach you Battle Pet Training for 10 , as well as how to Track Pets on your minimap.

The level requirement to receive Battle Pet Training is level 5, and once you've learned how to battle on one character, all your other characters will also receive the training. Race-Specific Starter Pets. Socket to Me - Quest. The Legion Fishing Artifact, Underlight Angler (Patch 7.1) - Guides. 7.2 Mage Trinkets - Fogli Google. Altered Time Forums.

You are missing out! 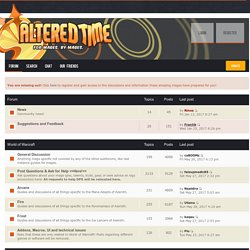 Click here to register and gain access to the discussions and information these amazing mages have prepared for you! General Discussion Anything mage specific not covered by any of the other subforums, like raid instance guides for mages. 199 Topics 4098 Posts Last post by caBOOMz Fri May 26, 2017 6:13 pm Post Questions & Ask for Help >>Here!

<< Ask questions about your mage spec, talents, build, gear, or seek advice on logs encounters here! Who is online In total there are 31 users online :: 2 registered, 0 hidden and 29 guests (based on users active over the past 5 minutes)Most users ever online was 519 on Sun Feb 14, 2016 6:31 pm Registered users: Bing [Bot], Google [Bot] Legend: Administrators, Global moderators, Staff Emeritus Statistics Total posts 31503 • Total topics 3699 • Total members 9252 • Our newest member Uliana. Mmo-champion. Arcane Mage 7.1.5 GuideI'm still editing this to be completely updated, so hold back all your amazing criticism for when it's completed. 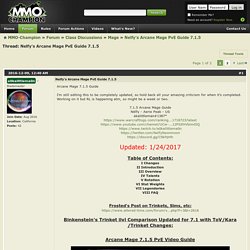 Working on it but RL is happening atm, so might be a week or two.Mana no longer increases damage based on what percentage you're at. 4 x Arcane Blast*-> Abarrage is no longer mana neutral Greater Invisibility is baseline for Arcane Ice Barrier is baseline for all mage specs Plenty of talent changesII - IntroductionArcane is a system based off of mana management,*Arcane Blasts, and Arcane Missile procs. *Mastery: Savant is responsible for increasing our damage, maximum mana, and mana regeneration.III - Overview Arcane Blast, Arcane Missiles, and Arcane Explosion all grant a stack of Arcane Charges which stacks up to 4.

Each Arcane Charge increases mana cost by 125% and damage by roughly 60% (increased by mastery).Arcane Missiles and Supernova are the only spells that cost no mana, where Arcane Blast and Arcane Explosion are both mana spenders. Legion Cooking Leveling Guide. This Cooking leveling guide will show you the fastest way how to level your Cooking skill from 1 to 800. 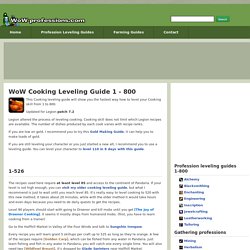 Updated for Legion patch 7.2 Legion altered the process of leveling cooking. Cooking skill does not limit which Legion recipes are available. The number of dishes produced by each cook varies with recipe ranks. If you are low on gold, I recommend you to try this Gold Making Guide, it can help you to make loads of gold. If you are still leveling your character or you just started a new alt, I recommend you to use a leveling guide. The recipes used here require at least level 85 and access to the continent of Pandaria. Level 90 players should start with going to Draenor and kill mobs until you get [The Joy of Draenor Cooking]. Go to the Halfhill Market in Valley of the Four Winds and talk to Sungshin Ironpaw. Every recipe you will learn grant 5 skillups per craft up to 525 as long as they're orange. 1. Don't forget to learn the new ranks of cooking at 50, 125, 275, 350 and at 425!

Legion Enchanting Leveling Guide. This Enchanting leveling guide will show you the fastest and easiest way how to level your Enchanting skill up from 1 to 800. 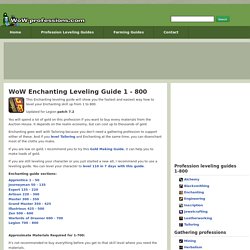 Updated for Legion patch 7.2 You will spend a lot of gold on this profession if you want to buy every materials from the Auction House. It depends on the realm economy, but can cost up to thousands of gold. Enchanting goes well with Tailoring because you don't need a gathering profession to support either of these. And if you level Tailoring and Enchanting at the same time, you can disenchant most of the cloths you make. Arcane Mage Artifact Weapon: Alu'neth, Greatstaff of the Magna - Guides. Arcane Mage DPS Stat Priority (Legion 7.2) - World of Warcraft. Table of Contents General Information On this page, we explain what the best statistics are for Arcane Mages in World of Warcraft Legion 7.2, how the class benefits from each of them. 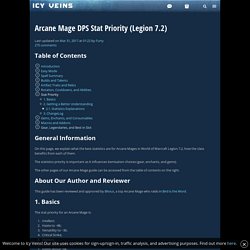 The statistics priority is important as it influences itemisation choices (gear, enchants, and gems). Arcane Mage DPS Spec, Builds, and Talents (Legion 7.1) - World of Warcraft. Table of Contents General Information On this page, we present the viable talent choices for Arcane Mages in World of Warcraft Legion 7.1. 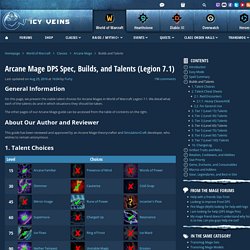 We detail what each of the talents do and in which situations they should be taken. The other pages of our Arcane Mage guide can be accessed from the table of contents on the right. About Our Author and Reviewer This guide has been reviewed and approved by an Arcane Mage theorycrafter and SimulationCraft developer, who wishes to remain anonymous. 1. Talents can be freely changed when out of combat and in a rested XP area (such as an inn or a capital city). Tome of the Tranquil Mind and Codex of the Tranquil Mind can be used to temporarily allow players to change talents anywhere, as long as they are out of combat. 2. Pathfinder. Broken Isles Pathfinder: How to Unlock Flying in Legion - Guides. Draenor flying trainer? - World of Warcraft Forums. Elysium Project — Vanilla 1.12.1 Legacy Server. World of Warcraft's Duskwood is Chilling in Unreal Engine 4.