Mebuyan, Mother of the Underworld: BAGOBO BELIEFS. There is a special place in the Bagobo underworld for children who died at their mothers’ breasts. 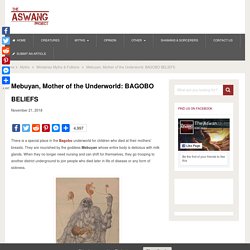 They are nourished by the goddess Mebuyan whose entire body is delicious with milk glands. When they no longer need nursing and can shift for themselves, they go trooping to another district underground to join people who died later in life of disease or any form of sickness. The “Ulit:” Adventures of Mythical Bagobo at the Dawn of Tradition Long ago Lumabat [1] and his sister (tube’ [2]) had a quarrel because Lumabat had said, “You shall go with me up into heaven.” And his sister had replied, “No, I don’t like to do that.” Then they began to fight each other. Then she took a bowl filled with pounded rice, and poured the rice into the mortar for a sign that the people should die and go down to Gimokudan. Legends of Mount Kanlaon, Negros Island. The terrible mad dragon of pagan days in the Philippines has returned to Great King mountain, where his tortures and moaning demand of the people once more the human sacrifice. 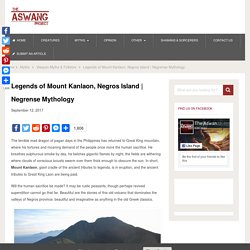 He breathes sulphurous smoke by day, he belches gigantic flames by night, the fields are withering where clouds of voracious locusts swarm over them thick enough to obscure the sun. In short, Mount Kanlaon, giant cradle of the ancient tributes to legends, is in eruption, and the ancient tributes to Great King Laon are being paid. Will the human sacrifice be made? It may be rustic peasants, though perhaps revived superstition cannot go that far. CREATURES OF PHILIPPINE MYTHOLOGY Documentary Web Series. Philippine Epics and Ballads Archive. Philippine Epics and Ballads Archives This multimedia archive has been undertaken by Nicole Revel, Directeur de recherche au CNRS, within the “Integral Study of Silk Roads: Roads of Dialogue“, a Program of the Decade for Cultural Development, Unesco (1991-2001). 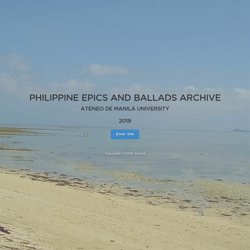 During more than ten years the sung narratives have been recorded and videotaped during the performance, then transcribed and translated in collaboration with the singers of tales, scholars and local knowledgeable persons among 15 National Communities where this verbal art is still alive today. This program was supported by 39 grants of the Ministry of Foreign Affairs of France.

Since 2001, the various documents have been digitized at the CNRS in Paris and Ateneo de Manila University. This archive (34 printed volumes, 7.521p. in 2011) is now housed at the Rizal Library, Pardo de Tavera special collections of Ateneo, Quezon City. This website was built thanks to the vision of Ateneo's President, Father Bienvenido Nebres S.J. Uncovering the BULAN & SIDAPA Love Story Deception. In this article, I have unfortunately been tasked with the duties of exposing 4 social media accounts that created this story and have been deliberately spreading false or inaccurate information with the intention to deceive. 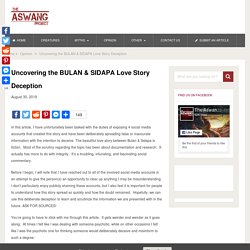 The beautiful love story between Bulan & Sidapa is fiction. Bewitching Balete Trees around the Philippines – Travel Up. If I had to pick a favorite tree, it would be the Balete (a relative of the Banyan tree). 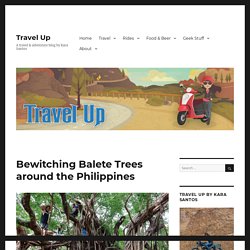 There’s just something about their haunting appearance, gnarled roots and their close ties to creatures of folklore that I find fascinating. They often look and feel like they could be portals to the Underworld. Or at least the setting for a good horror story. The Balete tree is infamous in Philippine folklore for being the dwelling place of engkantos or supernatural creatures and nature spirits such as dwendes (dwarves), kapres (tree demons), diwatas (fairies) and tikbalangs (demon horses). If you grew up in the Philippines, you’ve probably been told by superstitious folk not to go anywhere near these trees as these could be gateways to the world of myths. Balete trees are so famous that Pinoy movies and Halloween TV specials have been made about them.

Considered sacred trees in other cultures, Balete trees are actually epiphytes, a type of plant from the fig family that grows on other trees. How to Travel the Underworld of Philippine Mythology. PHILIPPINE MYTHOLOGY: A Chart of the Deities, Creatures & Heroes. INTO THE PANTHEON OF AMULET GODS. Dying to perk up your sex life without getting under the knife, subjecting yourself to therapies and drugs? 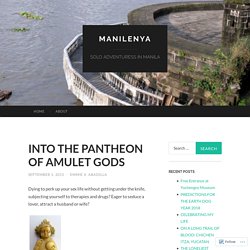 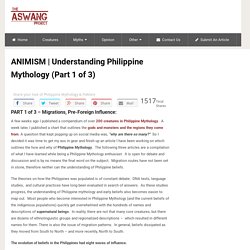 A week later, I published a chart that outlines the gods and monsters and the regions they come from. A question that kept popping up on social media was, “why are there so many?” An Ultimate Guide To Philippine Mythology Gods And Goddesses. For more interesting facts about the Philippines and its culture, please check out our latest book, “FilipiKnow: Amazing Facts & Figures Every Pinoy Must Know.” 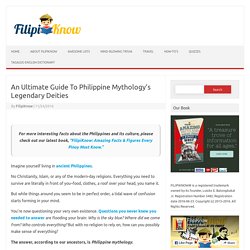 Imagine yourself living in ancient Philippines. No Christianity, Islam, or any of the modern-day religions. Everything you need to survive are literally in front of you–food, clothes, a roof over your head, you name it. But while things around you seem to be in perfect order, a tidal wave of confusion starts forming in your mind. You’re now questioning your very own existence. The answer, according to our ancestors, is Philippine mythology. Nope, we’re not going to talk about the whitewashed deities you grew up watching in movies.

Philippine mythology is much more important than you think. Bathala (creation god; [top]), a diwata (goddess/fairy, guardian of nature; [bottom]) and the Sarimanok (center) of Philippine mythology and folklore. For them, it was not just a belief in invisible higher beings. The late anthropologist H. 1. 2. Educational information about the Philippines. PHILIPPINE MYTHOLOGY: A Chart of the Deities, Creatures & Heroes. I’m a very visual person. 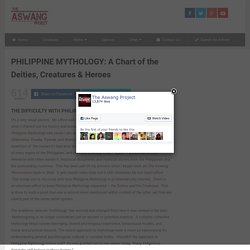