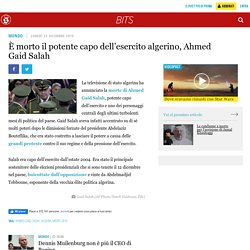 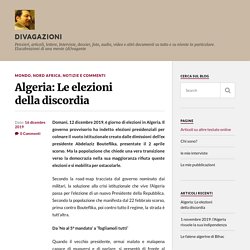 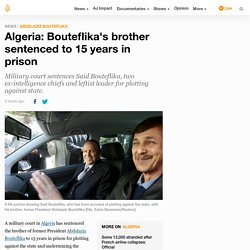 Three other co-defendants - two former intelligence chiefs and the head of a political party - were given the same sentence, APS news agency reported on Tuesday. Said Bouteflika was widely seen as the real power behind the presidency after his brother suffered a debilitating stroke in 2013. He was arrested in May, along with the two ex-intelligence bosses - Mohamed Mediene and Athmane or Bachir Tartag - and leftist leader Louisa Hanoune over a meeting in which they allegedly discussed imposing a state of emergency and firing army chief Ahmed Gaid Salah as a last-ditch effort to preserve the rule of the former president.

Bouteflika was forced to quit in April in the face of mass protests against his 20-year-rule. Islamist leader elected new speaker of Algeria parliament. Algerian legislators have elected an Islamist opposition figure as speaker of Algeria's parliament, according to state media. 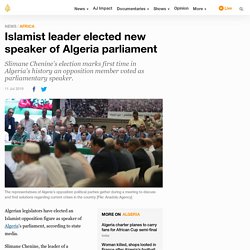 Slimane Chenine, the leader of a parliamentary alliance of three small Islamist parties, will replace Mouad Bouchareb of the National Liberation Front (NLF), the party that was led by former president Abdelaziz Bouteflika, state television reported late on Wednesday. Bouchareb resigned on July 2 amid pressure from protesters and politicians, three months after Bouteflika stepped down following weeks of nationwide protests and pressure from the powerful military.

Protesters have continued to take to the streets, demanding an overhaul of the political system and the removal of Bouteflika-era officials from office ahead of eventual elections. In an effort to appease demonstrators, Army Chief of Staff Ahmed Gaid Salah vowed to prosecute government officials and associates of the former president suspected of corruption. Qui est Slimane Chenine, nouveau président de l’APN ? Slimane Chenine, 54 ans, est le nouveau président de l’APN. 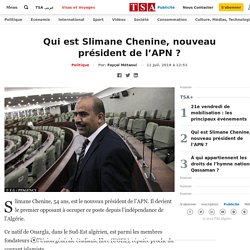 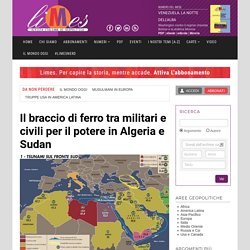 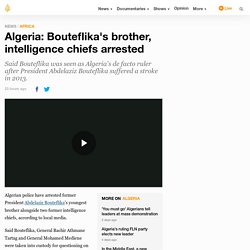 Said Bouteflika, General Bachir Athmane Tartag and General Mohamed Mediene were taken into custody for questioning on Saturday, the private Ennahar TV reported. The younger Bouteflika, who served as adviser to the president for more than a decade, is seen by many as having taken de facto control of the North African state, after his brother suffered a crippling stroke in 2013. Massive ongoing protests calling for a radical change pushed the ailing president to resign on April 2, but demonstrators continue to demand the removal of all those linked to the former administration. 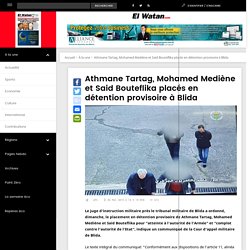 'Out with system': Algeria protesters reject interim president. Police in Algeria's capital have fired tear gas and water cannon at thousands of students protesting against the appointment of a new interim president who is a part of the ruling order they have been seeking to remove. 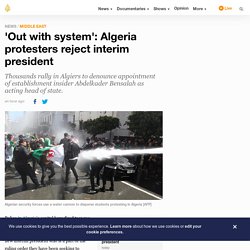 The demonstration in central Algiers on Tuesday took place as parliament officially confirmed upper house Speaker Abdelkader Bensalah as acting head of state for the next 90 days to replace Abdelaziz Bouteflika, who resigned last week under pressure from the weeks-long, youth-led protests. Footage showed security forces moving in on the demonstrators shouting "out with the system", dousing them with pepper spray, shooting from a water cannon and using batons to break up the crowd.

Bensalah's appointment is in accordance with Algeria's constitution but the protesters who drove Bouteflika out after 20 years in office are unsatisfied with the move because he is a key ally of the former president and a seasoned establishment insider. "Out with Bensalah, Belaiz et Bedoui! " Algeria: rimosso il generale Tartag, capo dell'intelligence e fedelissimo di Bouteflika. 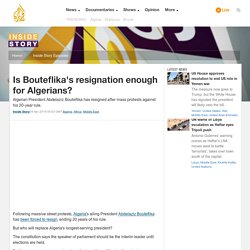 Although Bouteflika later reversed his decision, the 82-year-old postponed elections set for April and said he would remain in power until a new constitution was adopted, a move that effectively extended his current term. In a televised address on Tuesday, Salah, the army chief, said he considered the people's demands to be valid and that the presidency should be vacated. Algeria after Bouteflika: Who will win the race? The announcement by Algerian President Abdelaziz Bouteflika that he will not run for a fifth term has elicited a negative reaction from the protesters who have been agitating for weeks to ensure that outcome. The problem is that elections have been postponed, thus prolonging the president’s tenure and giving those around him more time to prepare the succession they want. No quick transition But protesters are wrong in demanding a quick transition, which would also play into the hands of those who control power already.

The lesson of the 2011 Arab uprisings is that slow transitions are more likely to succeed and that early elections risk simply re-consolidating the status quo. The outcome of the uprising in Algeria will be determined not by how soon elections are held, but by how successful the regime’s opponents are in moving from protest in the streets to becoming major participants in the transition. Texte intégral du message du Président Bouteflika à l'occasion de la fête de la Victoire. Ali Benflis: "Per Bouteflika è finita. L'Algeria vuole voltare pagina"

"Be sure that the Army, aware of the security problems that some of neighbouring countries are encountering, is fully aware of the basics and dimensions of what is happening around us, namely the risks and threats to our country which remains the target of its enemies. Such awareness makes of the National Army an awakened and vigilant army.