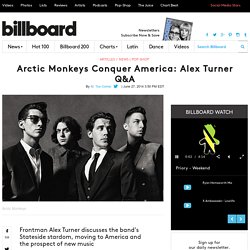 At home, in England, where all five of their albums have topped the charts, the four lads from Sheffield have been revered as saviors of indie rock from practically the second they picked up guitars. But it has taken eight years for the Monkeys to finally reach headliner status on this side of the pond. The band’s 2013 album, 'AM', reached No. 6 on the Billboard 200, its highest charting yet, and single “Do I Wanna Know?” Gave the group its first Billboard Hot 100 hit, peaking at No. 70 on March 8. But 'AM' still has legs months after its September release: Arctic Monkeys unleashed a music video for “Snap Out of It,” the album's sixth single — yes, sixth — on June 16, sending them to the top of our Trending 140 chart the next day. 'AM' has already given you your highest-charting album and single, and now “Snap Out of It” is making waves. 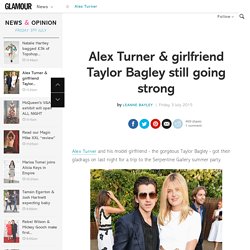 The pair have been inseparable since they started dating, and at last night's event, Alex Turner and Taylor couldn't keep their hands off one another, and were spotted later going for dinner at the Chiltern Firehouse. Taylor sported a white two piece ensemble, which featured white damask patterning across the chest and waistline, and she completed the look with a pair of nude coloured Valentino flats. Alex Turner - Biography. Alex Turner - Biography. 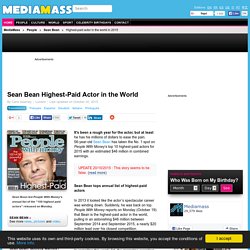 Hot news It's been a rough year for the actor, but at least he has his millions of dollars to ease the pain. 56-year-old Sean Bean has taken the No. 1 spot on People With Money’s top 10 highest-paid actors for 2015 with an estimated $46 million in combined earnings. UPDATE 20/10/2015 : This story seems to be false. (read more) Sean Bean tops annual list of highest-paid actors In 2013 it looked like the actor’s spectacular career was winding down. People With Money’s factors In compiling this yearly list, the magazine considers factors such as upfront pay, profit participation, residuals, endorsements and advertising work.

The British actor has an estimated net worth of $145 million. The ranking is significant for many Sean fans, who have been waiting for his triumphant return to the glory days for what seems like a lifetime. Sean Bean arrives in Los Angeles with his 29-year-old fiancée Ashley Moore. By Lucy Mapstone for MailOnline Published: 09:43 GMT, 30 January 2015 | Updated: 12:26 GMT, 30 January 2015 He's gearing up for promotional activities ahead of the release of his new movie, Jupiter Ascending. 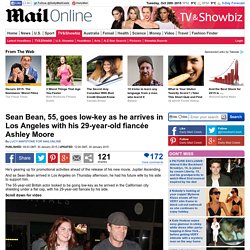 And as Sean Bean arrived in Los Angeles on Thursday afternoon, he had his future wife by his side to support him. The 55-year-old British actor looked to be going low-key as he arrived in the Californian city shielding under a flat cap, with his 29-year-old fiancée by his side. Sean Bean - Biography. TalkTalk have created this exclusive biography of Sean Bean - we believe it to be the most comprehensive on the web Personal details Name: Sean BeanBorn: 17 April 1959 (Age: 56)Where: Sheffield, EnglandHeight: 5' 11"Awards: No Major Awards Biography: One of the strangest and most frightening things we can do is stop and consider how we got where we are.

How far our lives are from what we expected, and from what was expected for us. He was born Shawn Mark Bean on the 17th of April, 1959, in Sheffield. 10 Things you probably didn't know about Sean Bean. From 1998 to 2008 Sean Bean played Napoleonic soldier Richard Sharpe in 16 episodes of the television series Sharpe, based on Bernard Cornwell’s best-selling novels. 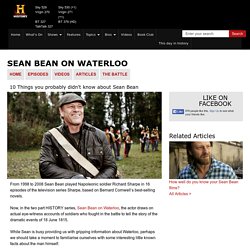 Now, in the two part HISTORY series, Sean Bean on Waterloo, the actor draws on actual eye-witness accounts of soldiers who fought in the battle to tell the story of the dramatic events of 18 June 1815. While Sean is busy providing us with gripping information about Waterloo, perhaps we should take a moment to familiarise ourselves with some interesting little known facts about the man himself. 10. Sean Bean was considered for the role of John Smith in Disney's 1995 film Pocohontas but lost out to Mel Gibson. 9. 8. 7. 6. 5. 4. 3. 2. 1. "I went back to Nic Cage's house, and we'd had a few drinks, we were playing pool and he accidentally knocked over his prehistoric cave bear skull and smashed it. John Reppion. Sean Bean - Biography.