Low doses of THC (cannabis) can halt brain damage, study suggests. Hough marijuana is a well-known recreational drug, extensive scientific research has been conducted on the therapeutic properties of marijuana in the last decade. 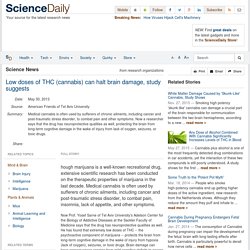 Medical cannabis is often used by sufferers of chronic ailments, including cancer and post-traumatic stress disorder, to combat pain, insomnia, lack of appetite, and other symptoms. Now Prof. Yosef Sarne of Tel Aviv University's Adelson Center for the Biology of Addictive Diseases at the Sackler Faculty of Medicine says that the drug has neuroprotective qualities as well. Medical Cannabis: New Hope For Babies Born With Brain Injuries. With support for the nationwide legalization of medical marijuana on the rise, scientists are finally conducting valuable research on cannabinoids – the compounds found in cannabis – to understand their potential use in the treatment of an expanding range of ailments and conditions. 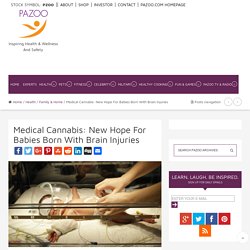 A study conducted by the Society of Cannabis Clinicians suggests cannabis as a viable treatment for infants suffering from perinatal brain injuries – which occur shortly before, during, or after birth. There are many causes of trauma to the young, vulnerable brain, however, there are very few treatments available today. Cannabis could be the answer that families of debilitated children have been praying for. Perinatal Brain Injuries The causes of perinatal brain injuries include neonatal asphyxia, neonatal hypoxia-ischemia, and/or stroke-induced focal ischemia. Should Marijuana be Legalized. Rohan Basu PHIL119H Research Essay. Marijuana Position Paper. Altered State?

Assessing How Marijuana Legalization in California Could Influence Marijuana Consumption and Public Budgets Key findings include the following: (1) the pretax retail price of marijuana will substantially decline, likely by more than 80 percent. 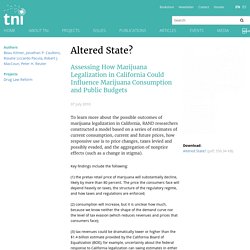 Examining the Impact of Marijuana Legalization on Marijuana Consumption: Insights from the Economics Literature. A central question in the debate regarding the legalization of marijuana in California is whether consumption would rise and by how much. 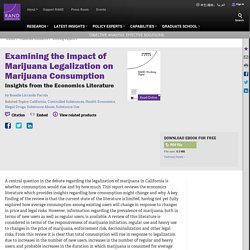 This report reviews the economics literature which provides insights regarding how consumption might change and why. A key finding of the review is that the current state of the literature is limited, having not yet fully explored how average consumption among existing users will change in response to changes in price and legal risks. However, information regarding the prevalence of marijuana, both in terms of new users as well as regular users, is available. A review of this literature is considered in terms of the responsiveness of marijuana initiation, regular use and heavy use to changes in the price of marijuana, enforcement risk, decriminalization and other legal risks.

The research in this report was conducted by the RAND Drug Policy Research Center.