Red Ribbon Resources is a products brand, with materials celebrating a drug-free, substance-free life. The brand is heavily engaged in providing Red Ribbon Week products and supplies to elementary schools (and other grades), organizations, and community groups to raise the awareness -- in children, teens, and adults -- about the dangers of drugs and alcohol [in accordance with the Red Ribbon Week initiative]. 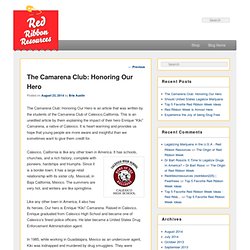 This is an unedited article by them explaining the impact of their hero Enrique “Kiki” Camarena, a native of Calexico. It is heart-warming and provides us hope that young people are more aware and insightful than we sometimes want to give them credit for. Calexico, California is like any other town in America. It has schools, churches, and a rich history, complete with pioneers, hardships and triumphs.

Like any other town in America, it also has its heroes. In 1985, while working in Guadalajara, Mexico as an undercover agent, Kiki was kidnapped and murdered by drug smugglers. That year, the Camarena Club of Calexico High School was founded by students, teacher David Dhillon, and Henry Lozano, the Director of Teen Challenge. This pledge was later written as a proclamation, and many students at Calexico High School signed it, pledging not to use drugs. I Pledge To Be Drug Free! Bookmark. 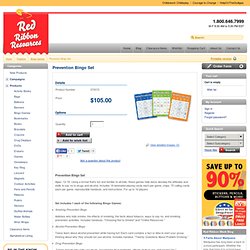 Using a format that's fun and familiar to all kids, these games help teens develop the attitudes and skills to say no to drugs and alcohol. Includes 16 laminated playing cards each per game, chips, 75 calling cards each per game, reproducible handouts, and instructions. For up to 16 players Set includes 1 each of the following Bingo Games: Smoking Prevention Bingo.

Red Ribbon Week Blog - No To Marijuana Legalization. In our last article entitled Should The USA Legalize Marijuana, we presented the two sides of the argument with quotes and philosophies from varied sources. 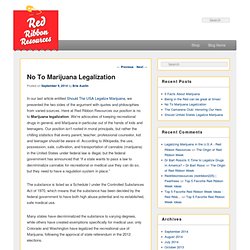 Here at Red Ribbon Resources our position is no to Marijuana legalization. We’re advocates of keeping recreational drugs in general, and Marijuana in particular out of the hands of kids and teenagers. Our position isn’t rooted in moral principals, but rather the chilling statistics that every parent, teacher, professional counselor, kid and teenager should be aware of. According to Wikipedia, the use, possession, sale, cultivation, and transportation of cannabis (marijuana) in the United States under federal law is illegal, but the federal government has announced that “if a state wants to pass a law to decriminalize cannabis for recreational or medical use they can do so, but they need to have a regulation system in place.”

There were similar ballot measures in Oregon and California where it narrowly failed. More reasons for alarm: Red Ribbon Week Ready to Use Drug Prevention Activities Book. Red Ribbon Week - Don't Monkey Around With Drugs Wrist Wrap. Being in the Red can be great at times! Who ever said ‘being in the red’ has negative connotations was wrong. 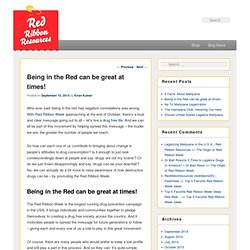 With Red Ribbon Week approaching at the end of October, there’s a loud and clear message going out to all – let’s live a drug free life. And we can all be part of this movement by helping spread this message – the louder we are, the greater the number of people we reach. So how can each one of us contribute to bringing about change in people’s attitudes to drug consumption? Is it enough to just look condescendingly down at people and say ‘drugs are not my scene’? Or do we just frown disapprovingly and say ‘drugs can be your downfall’? The Red Ribbon Week is the longest running drug prevention campaign in the USA. Of course, there are many people who would prefer to keep a low profile and still play a part in this process. Red Ribbon Week - See Me! Drug Free! Flashlight Keychain. Red Ribbon Week Don't Monkey Around With Drugs Water Bottle.

Red Ribbon Week Blog - 5 Facts About Marijuana. Marijuana has long been a back to school participant. 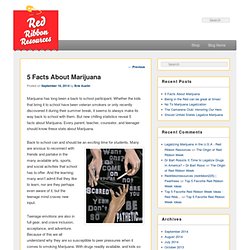 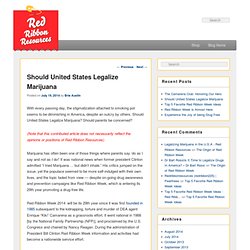 Should United States Legalize Marijuana? Should parents be concerned? (Note that this contributed article does not necessarily reflect the opinions or positions of Red Ribbon Resources) Marijuana has often been one of those things where parents say ‘do as I say and not as I do!’ It was national news when former president Clinton admitted “I tried Marijuana … but didn’t inhale.” Red Ribbon Week 2014 will be its 29th year since it was first founded in 1985 subsequent to the kidnapping, torture and murder of DEA agent Enrique “Kiki” Camarena as a grassroots effort. 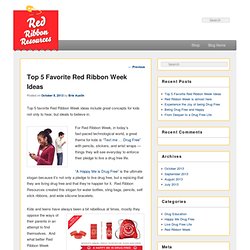 For Red Ribbon Week, in today’s fast-paced technological world, a great theme for kids is “Text me … Drug Free” with pencils, stickers, and wrist wraps — things they will see everyday to enforce their pledge to live a drug free life. “A Happy Me is Drug Free” is the ultimate slogan because it’s not only a pledge to live drug free, but a rejoicing that they are living drug free and that they’re happier for it. Red Ribbon Resources created this slogan for water bottles, sling bags, pencils, self stick ribbons, and wide silicone bracelets.

Kids and teens have always been a bit rebellious at times, mostly they oppose the ways of their parents in an attempt to find themselves. There are other kids that are not as rebellious, not as quick to step out in the limelight of their own confidence. Some kids are simply Too Smart to Start, and that too can be a theme for your celebrations.