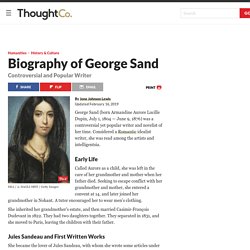 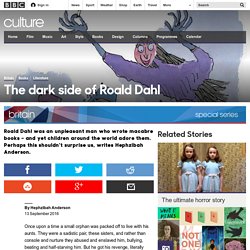 They were a sadistic pair, these sisters, and rather than console and nurture they abused and enslaved him, bullying, beating and half-starving him. But he got his revenge, literally crushing them as he finally escaped, bound for adventure and a better life. It doesn’t sound much like the set-up of a bestselling children’s book, but what if I told you that the boy’s getaway vehicle was a gargantuan fuzzy-skinned fruit? James and the Giant Peach sprang from bedtime stories Roald Dahl told his daughters. He’d already seen modest success with his short stories for adults, twisted tales with grisly punch lines, which were published in magazines such as the New Yorker and Playboy.

James and the Giant Peach has been lambasted for its racism, profanity and sexual innuendo Chocolate and witches “Wonka is vegetarian and only eats healthy food, but he seduces children with sweets. ‘Roald the Rotten’ Log In - New York Times. The Do's and Don'ts of an Iceland Road Trip - Young Adventuress. If there was ever a country perfectly suited for a road trip, it’s Iceland. 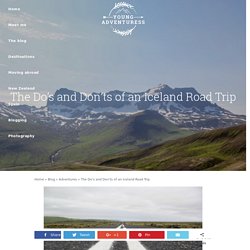 Majestic lava fields mingle with snow-capped mountains to create a world that will constantly leave you wondering, “is this real life? How can such a place exist?” Existential questions aside, if doing an unforgettable road trip tops your travel bucketlist, head straight to Iceland. The most popular (and pretty much only) road trip in Iceland is the Ring Road, or Route 1. 830 miles of adventure and surprises, the Ring Road, as you probably have already deciphered, encircles Iceland connecting major towns.

While you can certainly cycle or hitchhike the Ring Road (in summer) the best way to see it is by car with a couple good friends and some good music. 4 girls. 7 days. 1 car. This trip was epic and unforgettable in so many ways. Do – pick a car that matches your trip The most important part of a road trip are the wheels that will carry you from point A to B and beyond. When are you going? Don’t – rush it. The wordsmith shop of J. Pierre Reville. 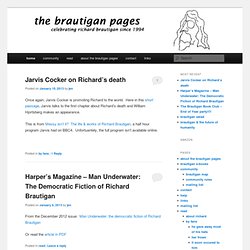 Here in this short passage, Jarvis talks to the first chapter about Richard’s death and William Hjortsberg makes an appearance. This is from Messy isn’t it? The life & works of Richard Brautigan, a half hour program Jarvis had on BBC4. Unfortuantely, the full program isn’t available online. If you haven’t been following these fantastic events, here’s your last chance! And if you’re London based (or anywhere nearby-ish), you should be attending! This Thursday nite, Nov 27th, is So the Wind Won’t Blow it All Away. It’s about a month old but the last installment of Brautigan Salad is online. And there’s a bonus story of the handlebar. From Brautigan Salad Watched over by Machines of Loving Grace is quoted over at an aticle on io9 entitled 7 Best Case Scenarios for the Future of Humanity.