Tripadvisor for hotels, Yelp for restaurants and IMDb for films, We are Recfluence for Recruitment Agencies. 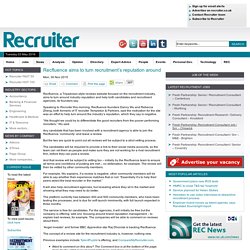 Speaking to Recruiter this morning, Recfluence founders Danny Wu and Rebecca Zheng, both formerly of IT recruiter Templeton & Partners, said the motivation for the site was an effort to help turn around the industry’s reputation, which they say is negative. “We thought we could try to differentiate the good recruiters from the poorer performing recruiters,” Wu said. Any candidate that has been involved with a recruitment agency is able to join the Recfluence ‘community’ and leave a review. But the two are quick to point out all reviews will be subject to a strict vetting process. The candidates will be required to provide a link to their social media accounts, so the team can vet them as people and make sure they are not working for a rival recruitment firm, before they can post a review. Why Do You Need a Recruitment Agency Reviewing Portal Today?

Job hunting can be a difficult process for anyone who has left the university recently. 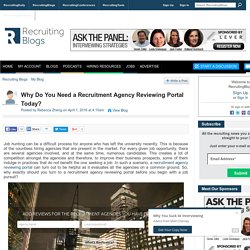 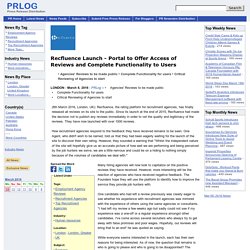 Since its launch at the end of 2015, Recfluence had made the decision not to publish any reviews immediately in order to vet the quality and legitimacy of the reviews. They have now launched with over 1000 reviews. How recruitment agencies respond to the feedback they have received remains to be seen. Many hiring agencies will now look to capitalize on the positive reviews they have received. While everyone seems interested in the launch, each has their own reasons for being interested. Reviews Made Public, Access Feedback for all Recruiters Today - Recfluence.com. When Recfluence opened for reviews in the end of 2015, the idea was to help job seekers from different professional backgrounds. 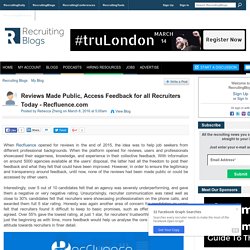 When the platform opened for reviews, users and professionals showcased their eagerness, knowledge, and experience in their collective feedback. With information on around 5000 agencies available at the users’ disposal, the latter had all the freedom to post their feedback and what they felt that could have been improved. However, in order to ensure the legitimacy and transparency around feedback, until now, none of the reviews had been made public or could be accessed by other users. Interestingly, over 5 out of 10 candidates felt that an agency was severely underperforming, and gave them a negative or very negative rating. Unsurprisingly, recruiter communication was rated well as close to 30% candidates felt that recruiters were showcasing professionalism on the phone calls, and awarded them full 5 star rating.

Top 8 Reasons Why You Need to Sign Up on Recfluence! Recfluence has ventured into the digital space after a successful launch, ushering a new age of recruitment for candidates as well as recruiters. 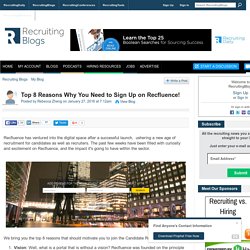 The past few weeks have been filled with curiosity and excitement on Recfluence, and the impact it's going to have within the sector. We bring you the top 8 reasons that should motivate you to join the Candidate Revolution: Vision: Well, what is a portal that is without a vision? Recfluence was founded on the principle of helping job seekers by empowering them with information. Promising impeccable transparency, we aim to be game-changing visionary.Big Data: Where else would you find numerous recruitment agencies reviewed legitimately?