Jim Plank's Origami Page (Modular) How To Make Intersecting Planes Models. Sonobe module. Instuctions for making this model Below is the Sonobe unit, designed by Mitsonobu Sonobe, which I learned from Kazuyo Inoue. 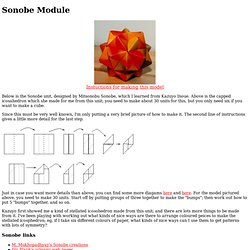 Above is the capped icosahedron which she made for me from this unit; you need to make about 30 units for this, but you only need six if you want to make a cube. Since this must be very well known, I'm only putting a very brief picture of how to make it. Platonic Solid. The Platonic solids, also called the regular solids or regular polyhedra, are convex polyhedra with equivalent faces composed of congruent convex regular polygons. 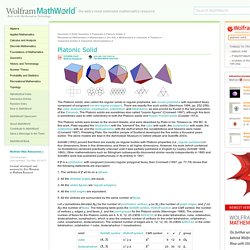 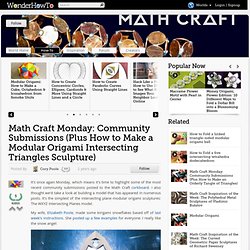 I also thought we'd take a look at building a model that has appeared in numerous posts. It's the simplest of the intersecting plane modular origami sculptures: The WXYZ Intersecting Planes model. My wife, Elizabeth Poole, made some kirigami snowflakes based off of last week's instructions. She posted up a few examples for everyone. I made a few more, as well.

My wife also gave me an idea—making snowflakes based off of tessellations. Justin Meyers of Scrabble World posted up a link to a really cool how-to on making beautiful origami Christmas trees. Here's a "quick" version I made. Rachel Mansur posted up a plethora of links to some amazing origami artworks. Or maybe it was this picture of a giant Sonobe icosahedron: Materials and Tools. Www.papierfalten.de/documents/faltanleitungen/margarete_stern.pdf. Www.origami.gr.jp/Archives/Etc/convention02/SR_Dodecahedron1.pdf. Dev.origami.com/images_pdf/tematebaku. Www.origamee.net/diagrams/cubes/meecube2.html. Thatch Cube. 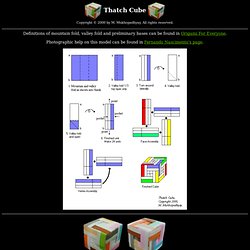 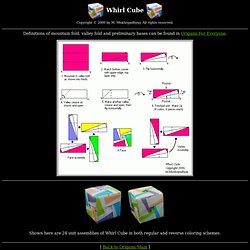 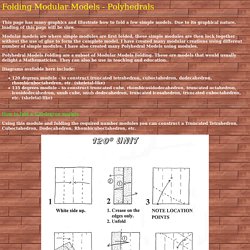 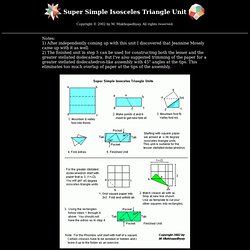 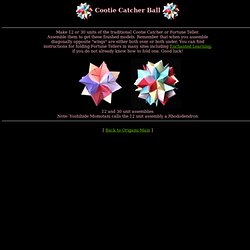 Assemble them to get these finished models. Remember that when you assemble diagonally opposite "wings" are either both over or both under. You can find instructions for folding Fortune Tellers in many sites including Enchanted Learning, if you do not already know how to fold one. Good luck! Two Thirds Sonobe. Copyright © 2001 by M. 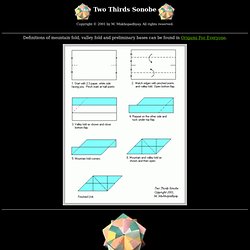 Mukhopadhyay. All rights reserved. Definitions of mountain fold, valley fold and preliminary bases can be found in Origami For Everyone. Www.origamee.net/diagrams/sonobes/sonobe3.html. Sonobe Variation Copyright (c) 1999 by M. 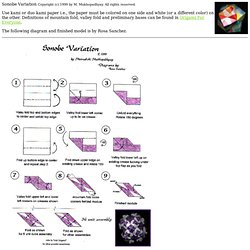