Are you a crime show lover and searching for a true-crime show in new york city? If yes, visit rebekahsebastian.com and witness the real crime trivia show with each show been well-organized, challenging, and also sometimes hilarious. 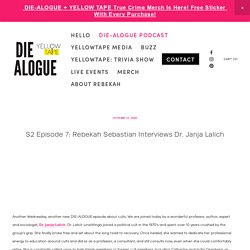 We are joined today by a wonderful professor, author, expert and sociologist, Dr. Janja Lalich. Dr. Lalich unwittingly joined a political cult in the 1970's and spent over 10 years crushed by the group's grip. She finally broke free and set about the long road to recovery. Dr. True Crime Conversation. Rick Alan Ross on DIE-ALOGUE: a true crime conversation podcast — REBEKAH SEBASTIAN.

Welcome back to our kick off cult episode - PART TWO. 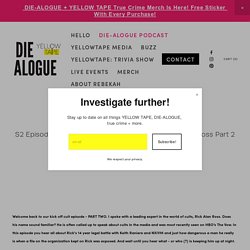 I spoke with a leading expert in the world of cults, Rick Alan Ross. Does his name sound familiar? He is often called up to speak about cults in the media and was most recently seen on HBO’s The Vow. In this episode you hear all about Rick's 14 year legal battle with Keith Raniere and NXIVM and just how dangerous a man he really is when a file on the organization kept on Rick was exposed. Rick Alan Ross on DIE-ALOGUE Podcast — REBEKAH SEBASTIAN. It’s October and our new 4 week series will be CULTS. 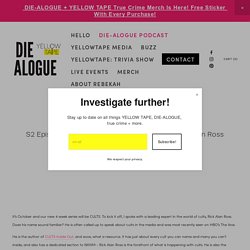 To kick it off, I spoke with a leading expert in the world of cults, Rick Alan Ross. Does his name sound familiar? He is often called up to speak about cults in the media and was most recently seen on HBO’s The Vow. Die-Alogue Podcast. Rebekah Sebastian Interviews Jeff Deskovic, Exonoree and Legal Advocate. — REBEKAH SEBASTIAN. This is PART 2 of my conversation with Jeff. 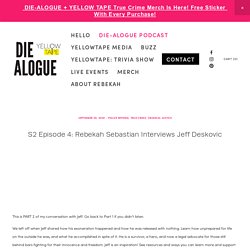 Go back to Part 1 if you didn't listen. We left off when Jeff shared how his exoneration happened and how he was released with nothing. Learn how unprepared for life on the outside he was, and what he accomplished in spite of it. True Crime Podcaster, Rebekah Sebasian, Interviews NY State Exonoree Jeff Deskovic — REBEKAH SEBASTIAN. It was an honor to interview today's guest, Jeff Deskovic. 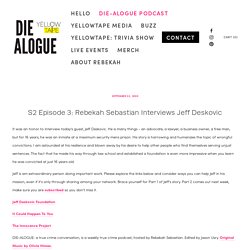 He is many things - an advocate, a lawyer, a business owner, a free man, but for 16 years, he was an inmate at a maximum security mens prison. His story is harrowing and humanizes the topic of wrongful convictions. I am astounded at his resilience and blown away by his desire to help other people who find themselves serving unjust sentences. The fact that he made his way through law school and established a foundation is even more impressive when you learn he was convicted at just 16 years old. Jeff is am extraordinary person doing important work. Jeff Deskovic Foundation It Could Happen To You The Innocence Project. True Crime Trivia. True Crime Investigative Journalist, Maggie Freleng is on DIE-ALOGUE podcast. — REBEKAH SEBASTIAN. Welcome, Maggie Freleng! 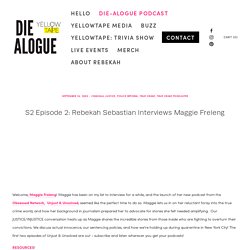 Maggie has been on my list to interview for a while, and the launch of her new podcast from the Obsessed Network, Unjust & Unsolved, seemed like the perfect time to do so. Maggie lets us in on her reluctant foray into the true crime world, and how her background in journalism prepared her to advocate for stories she felt needed amplifying. Our JUSTICE/INJUSTICE conversation heats up as Maggie shares the incredible stories from those inside who are fighting to overturn their convictions. We discuss actual innocence, our sentencing policies, and how we're holding up during quarantine in New York City! The first two episodes of Unjust & Unsolved are out - subscribe and listen wherever you get your podcasts!

The Staircase Lawyer for Michael Peterson on DIE-ALOGUE Podcast — REBEKAH SEBASTIAN. We are back! 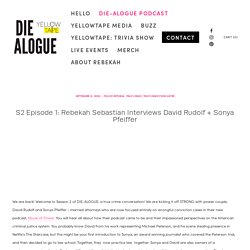 Welcome to Season 2 of DIE-ALOGUE: a true crime conversation! We are kicking it off STRONG with power couple, David Rudolf and Sonya Pfeiffer - married attorneys who are now focused entirely on wrongful conviction cases in their new podcast, Abuse of Power. You will hear all about how their podcast came to be and their impassioned perspectives on the American criminal justice system. You probably know David from his work representing Michael Peterson, and his scene stealing presence in Netflix's The Staircase, but this might be your first introduction to Sonya, an award winning journalist who covered the Peterson trial, and then decided to go to law school. Together, they now practice law together. Subscribe to ABUSE OF POWER PODCAST: Guest suggestion? 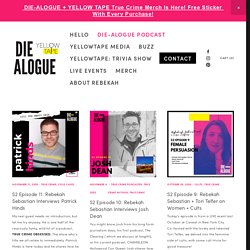 He is one half of the raucously funny, wild hit of a podcast, TRUE CRIME OBSESSED. The show who's title we all relate to immediately. Patrick Hinds is here today and he shares how he and Gillian stumbled into the successful format of TCO, then formed his network, THE OBSESSED NETWORK, and hints at a new some show coming in January. I am confident you will hear a new side of Patrick in this conversation - he says serious, I say impassioned and I like it! Read More. Hello — REBEKAH SEBASTIAN.