Business overview - Next Plc. The NEXT Brand The NEXT retail chain was launched in February 1982 and the first store opened with an exclusive coordinated collection of stylish clothes, shoes and accessories for women. 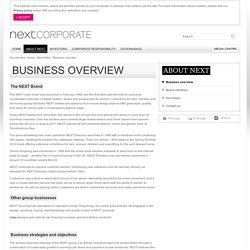 Collections for men, children and the home quickly followed. NEXT clothes are styled by its in-house design team to offer great style, quality and value for money with a contemporary fashion edge. PUMA® – Strategy. In terms of our brand repositioning, August 2014 saw the successful launch of our worldwide Forever Faster brand campaign – the biggest marketing campaign in PUMA’s history. 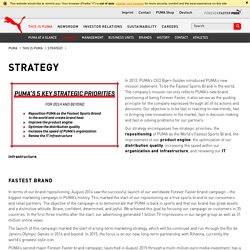 This marked the start of our repositioning as a true sports brand to our consumers and retail partners. The objective of the campaign is to demonstrate that PUMA is back in sports and that our brand has great assets and a distinctive attitude: Brave, confident, determined, and joyful. Expansion strategy. Our stores Our stores should always be in the best locations for business. 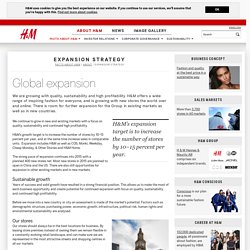 By leasing store premises instead of owning them we remain flexible in a constantly evolving retail landscape, and can make sure we are represented in the most attractive streets and shopping centres in all our markets. H&M stores are run by H&M, with the exception of some markets where we collaborate with franchising partners. Franchising is not part of the general expansion strategy. Nike News - NIKE, Inc. Introduces 2015 Global Growth Strategy. 1.3 About Nike Inc - NIKE, Inc. Sport, Exercise and Physical Activity: Public Participation, Barriers and Attitudes. Participation levels 2.1 Respondents were asked how often they took part in sport, exercise or any physical activity. 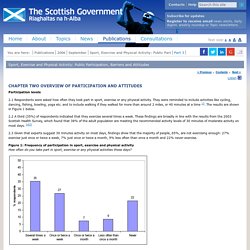 They were reminded to include activities like cycling, dancing, fishing, bowling, yoga etc. and to include walking if they walked for more than around 2 miles, or 40 minutes at a time 13. The results are shown in Figure 1 below. 2.2 A third (35%) of respondents indicated that they exercise several times a week. These findings are broadly in line with the results from the 2003 Scottish Health Survey, which found that 38% of the adult population are meeting the recommended activity levels of 30 minutes of moderate activity on most days. 1415 2.3 Given that experts suggest 30 minutes activity on most days, findings show that the majority of people, 65%, are not exercising enough: 27% exercise just once or twice a week, 7% just once or twice a month, 9% less often than once a month and 22% never exercise. 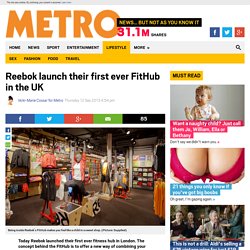 The concept behind the FitHub is to offer a new way of combining your fitness lifestyle with your shopping experience. The store is decked out like a gym: there are fixtures that replicate gym equipment such as agility rings, music specially selected for workouts, genuine gym flooring and functioning plyometric jump boxes as seating.

Customers are literally immersed in fitness as soon as they enter. Apparel is clustered together around the store according to your workout (classic, training, running and studio), so it’s easy to find exactly what you need. Summer Trainers Trend Vogue Editors' Guide - Nike, Adidas & Chanel. 16 April 2014 Julia Hobbs IT'S 10.20am and Sean McDowell, the creative director of running at Nike, is chatting about Epic Tights, the super clingy performance leggings that are the company's latest bestseller for women, and his morning run through the ruins of Athens's old city yesterday. 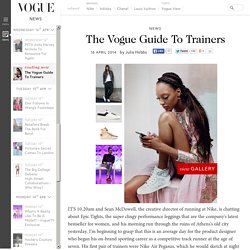 I'm beginning to grasp that this is an average day for the product designer who began his on-brand sporting career as a competitive track runner at the age of seven. His first pair of trainers were Nike Air Pegasus, which he would sketch at night in his bedroom in upstate New York - 2014, he reminds me, is the thirty-first year of Nike Air Pegasus, as though noting his own birthdate. On McDowell's feet today, however, are Nike Free 3.0 sneakers, the latest launch from the company - a dense, stretchy knit trainer available for total customisation online via Nike iD (right down to stamping your name on the shoe's tongue).

"Isn't that cool? See Vogue's guide to the new sneaker rules, here. Texprocess 2013 with new technologies for innovative sportswear. With the Olympics last year, there has been a considerable focus on innovation in sportswear. 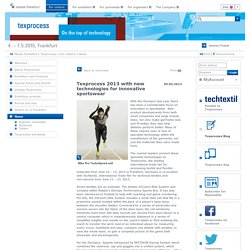 New product developments from both small companies and large brands alike, not only make garments look and fit better, they also help athletes perform better. Many of these require uses of new or specialist technology within the manufacture of the garments, not just the materials they were made from. The market leaders present these specialist technologies at Texprocess, the leading international trade fair for processing textile and flexible materials from June 10 – 13, 2013 in Frankfurt, Germany in co-location with Techtextil, International Trade Fair for technical textiles and non-wovens from June 11 – 13, 2013. Number of stores worldwide of the H&M Group by country, 2013. Reading support This statistic shows the number of stores worldwide of the H&M Group from 2009 to 2013, by country. 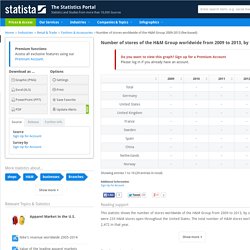 In 2011, there were 233 H&M stores open throughout the United States. Primark - About Us. Adored by fashion fans and value seekers alike Primark is widely established as the destination store for keeping up with the latest looks without breaking the bank. 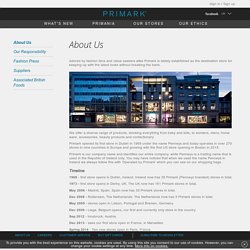 We offer a diverse range of products, stocking everything from baby and kids, to womens, mens, home ware, accessories, beauty products and confectionery. Primark opened its first store in Dublin in 1969 under the name Penneys and today operates in over 270 stores in nine countries in Europe and growing with the first US store opening in Boston in 2015. Primark is our company name and identifies our entire company, while Penneys is a trading name that is used in the Republic of Ireland only.

You may have noticed that when we used the name Penneys in Ireland we always follow this with ‘Operated by Primark’ which you can see on our shopping bags. Nike competitive analysis. Nike VP of Digital - Fuel, Fashion, and Future - Style.com. Game, set and match ... a history of sport and fashion. You might wonder what this gathering of the world's elite athletes 400 miles away has to do with you. 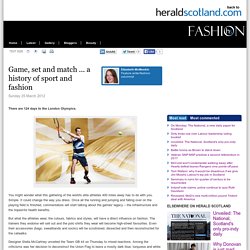 Simple. It could change the way you dress. Once all the running and jumping and falling over on the playing field is finished, commentators will start talking about the games' legacy – the infrastructure and the hoped-for health benefits. But what the athletes wear, the colours, fabrics and styles, will have a direct influence on fashion. Techno advanced sportswear. Update your summer workout wardrobe with our must have techno advanced sportswear pieces; that are guaranteed to improve your overall performance and help you move better. One of our favourite fitness bands Jawbone’s Up24; the jawbone is compact, looks sleek and is simple to use. Jawbone’s Up24 collects information on how you eat, sleep and move and then presents the findings in easy to understand graphics on your Smartphone; the app displays your data and lets you add extras such as meals and mood.

The Jawbone then delivers insights that will improve how you sleep or exercise. What Fashion Brands Can Learn from Nike - The Business of Fashion. NEW YORK, United States — Fashion brands are finally getting serious about digital media. But so far, their strategies have mostly focused on marketing and communications initiatives like interactive advertising campaigns, fashion films and live-streamed runway shows. Integrating digital technology into the core product offering remains a largely unexploited area of opportunity. Here, fashion companies can learn a lot from one of the world’s most digitally innovative brands: global sportswear giant Nike. Last month, to coincide with the start of the FIFA World Cup, Nike launched a three-minute film called “Write the Future”, featuring football superstars like Wayne Rooney and Didier Drogba.

According to web video analytics company Visible Measures “Write the Future” clocked a record 7.8 million online views in its debut week, underscoring the power of creating compelling digital content that consumers will voluntarily seek out and share with others. Nike's revenues rise helped by fashion-led sportswear. Pay in the changing room at H&M’s new tech rich Times Square store.

H&M’s new 4 storey store in New York’s Time Square has been equipped technology that allows consumers to pay for purchases in the dressing-room area. iPad stations and benches can also be found in the fitting rooms on various floors. There will also be “interactive mannequins” with screens attached to their foreheads that play videos or flash photos and special deal alerts. Meanwhile, shoppers will be invited to walk a “virtual runway” and have their catwalk performances projected on the store’s external LED screens for the throngs of tourists and office workers passing through Times Square.

Adidas RFID store. Adidas stores have been really driving digital innovation into the store experience. NEO stores in European cities like Frankfurt, Nuremberg and Helsinki are demonstrating the innovations described below: RFID changing room Customers that take product into the changing room are greeted with a mirrored display which provides more information about the products they have taken into the store as well as give the customers some ideas of outfits to combine.

RFID Point of sale & Security scannersAll products have RFID tags on them which, when placed on the counter, the till is able to scan immediately without any manual intervention. Once transaction is complete, these products can then be marked as paid for using the read/write functionality on the 2nd generation RFID tag. Products that are not marked as paid that leave the shop, will activate the alarm.

UK apparel market reporting considerable expansion plans for the leading sportswear retailers, Nike and Adidas. (live-PR.com) - Although the UK was amongst the fastest growing economies in Western Europe in 2013, apparel and footwear retailers were quick to offer discounts to consumers, with unseasonal weather conditions prompting panic on the high street. The popularity of economy retailers such as Primark forced many mid-range brands to drop their prices in order to encourage consumers to shop at their stores.

The business dress requirement in UK offices relaxed in recent years, and 2013 demonstrated as such, with tie retailer Tie Rack, once the go-to store for ties and office attire, closing the remainder of its 44 UK stores. Wearing a tie is now only mandatory for a minority of the workforce, with a large number of businesses abiding by a "smart-casual" dress code, which can vary widely from company to company. Jeans have become commonplace for both men and women at work, as well as for a variety of social occasions, making them the staple fashion item for many in the UK. Digital and the sportswear sector: stats. From pop singer to designer: Rita Ora launches collection for Adidas Original - News - Fashion - The Independent.

Adidas Group - Profile. Brand portfolio No other brand has a more distinguished history and stronger connection with sport than adidas. Top 3 Engaging Sports Brands on Social Media. Whether it’s for the championships, new products, or major events like the Super Bowl, social media helps sports brands and athletes build a community around their brands and connect with their fan base. Sports are inherently social, so it comes as no surprise that sports brands and finding exceptionally creative ways to successful engage with their communities and keep the conversation going with social media. Mary Katrantzou Talks Adidas Originals, the Future of Fashion and More - The Business of Fashion. Nike CR Report. Business Overview. N+TC Nike Training Club App. Nike.com (UK) Lookbook: Nike x Pedro Lourenço, featuring Karlie Kloss - SWEETESTmagazine. On Nov. 13th, Nike is releasing a capsule collaboration with Brazilian designer Pedro Lourenço – yes, the same guy who did the sexy Brazil national soccer team shirt for girls!

This time he brings us practical workout clothes with high-performance fabric and edgy style. This collection includes everything from jackets, to tank tops, to bras and everything else to satisfy your everyday workout needs. How sportswear became fashionable. H&M lines up to compete in booming sportswear market. Retailers are right to tackle the UK sportswear market in 2014. Nike - Statistics & Facts. Nike, Inc. is the world's largest supplier and manufacturer of athletic shoes, apparel and other sports equipment.