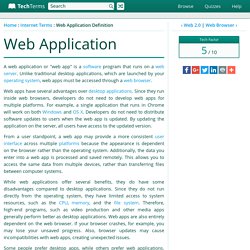 Unlike traditional desktop applications, which are launched by your operating system, web apps must be accessed through a web browser. Web apps have several advantages over desktop applications. Since they run inside web browsers, developers do not need to develop web apps for multiple platforms. For example, a single application that runs in Chrome will work on both Windows and OS X. What Are Web Applications? Web Applications or Website Widgets Over the past decade or so, the web has been embraced by millions of businesses as an inexpensive channel to communicate and exchange information with prospects and transactions with customers. 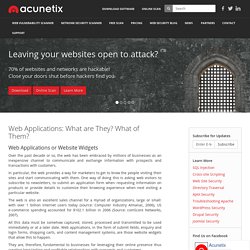 In particular, the web provides a way for marketers to get to know the people visiting their sites and start communicating with them. One way of doing this is asking web visitors to subscribe to newsletters, to submit an application form when requesting information on products or provide details to customize their browsing experience when next visiting a particular website. The web is also an excellent sales channel for a myriad of organizations, large or small: with over 1 billion Internet users today (source: Computer Industry Almanac, 2006), US e-commerce spending accounted for $102.1 billion in 2006 (Source: comScore Networks, 2007). All this data must be somehow captured, stored, processed and transmitted to be used immediately or at a later date. The 7 Critical Roles of Your Marketing Team. Whether you’ve got a full team of dedicated marketing professionals on your payroll or you’re the entrepreneur of a startup trying to market yourself, your end goal is the same: increase the visibility and reputation of your brand to attract more customers. 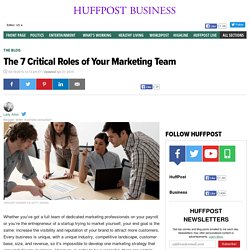 Every business is unique, with a unique industry, competitive landscape, customer base, size, and revenue, so it’s impossible to develop one marketing strategy that can work for any business. However, in order to be successful, there are certain roles that any marketing team will have to fill: 1. Jaeger: How a stalwart of high-class retail lost its fashion sense.

It takes decades to build a reputation and just moments to destroy it, or so the old adage goes. 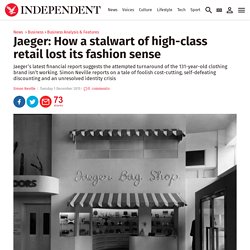 And a good example of that gradual ascent and rapid decline is Jaeger. Founded 131 years ago as Dr Jaeger’s Sanitary Woollen System Co Ltd (named after Dr Gustav Jaeger, a zoologist who promoted the use of natural animal fibres in clothing), the brand was long at the forefront of fashion. JAEGER LIMITED. Free business summary taken from official companies house information. Free alerts. Registered as 07894042. Jaeger sell-off pulled as bids fail to match asking price. The owner of the fashion label Jaeger has shelved attempts to sell the struggling chain after bids fell short of the asking price. 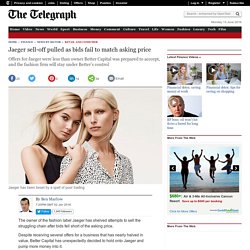 Despite receiving several offers for a business that has nearly halved in value, Better Capital has unexpectedly decided to hold onto Jaeger and pump more money into it. The move may surprise the fund’s investors, who were recently told Jaeger was now worth just £37m, despite Better ploughing £63m into the chain since rescuing it in April 2012.

Founded in 1884, and for much of its life at the forefront of high street fashion, Jaeger has been beset by a spell of poor trading stretching back several years. Jaeger to exit flagship store. British retailer Jaeger is reportedly close to leaving behind its 27,000 sq ft flagship store on Regent Street, which it has occupied for 80 years. 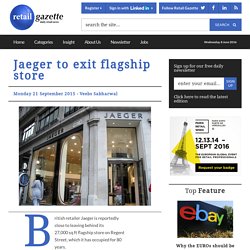 According to The Sunday Times, the upmarket clothing chain is in talks to sell the lease to US luxury accessories brand Coach for around £5m. Coach already trades from a store at 76-78 Regent Street and it is understood that it is looking to upsize into the larger Jaeger store at number 200-206. Last week Jaeger boss Colin Henry left the company and now Jaeger is looking to cut costs. The retailer’s private equity owner Better Capital has appointed turnaround consultancy AlixPartners as a financial advisor. 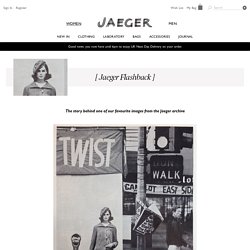 New York. British photographer David Bailey is shooting his new mistress and muse, Jean Shrimpton ‒ an unknown British model wearing a chic, tawny suede Young Jaeger coat ‒ whose thick fringe, full lips and big doe-eyes are about to kick-start the swinging sixties. How did it all begin? The young couple flew from Heathrow to New York that same year after rising star Bailey was given his first British Vogue commission, and refused to photograph anyone but 19-year-old Shrimpton. Digital Transformation: The Changing Customer in a Digital World. INSIGHT: Information Management Good businesses have always acknowledged that the customer is king—or queen. 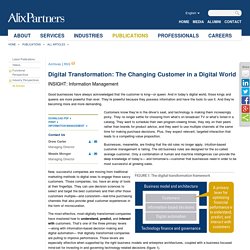 And in today’s digital world, those kings and queens are more powerful than ever. Fashion entrepreneur Harold Tillman planning a 'new Jaeger' The fashion entrepreneur Harold Tillman has spoken out against the way Jon Moulton’s Better Capital has run Jaeger since taking it over from him and declared he would start a rival business to serve disappointed Jaeger customers. 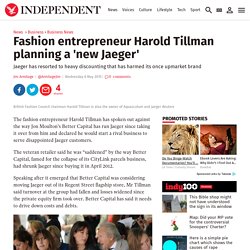 The veteran retailer said he was “saddened” by the way Better Capital, famed for the collapse of its CityLink parcels business, had shrunk Jaeger since buying it in April 2012. Speaking after it emerged that Better Capital was considering moving Jaeger out of its Regent Street flagship store, Mr Tillman said turnover at the group had fallen and losses widened since the private equity firm took over. Better Capital has said it needs to drive down costs and debts. Harold Tillman at London Fashion Week with Samantha Cameron and ‘Vogue’ editor Alexandra Shulman (left) Under his and Belinda Earl’s stewardship, Jaeger made profits for eight years, Mr Tillman said. Jaeger plans £8m marketing push.

Jaeger's new chief executive Colin Henry is hoping to bring the brand back to profit next year and implementing a five-year plan the aims to grow sales from 25% to 30% by 2018. 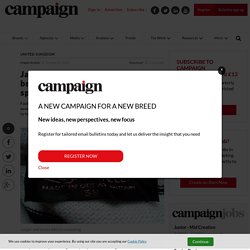 As part of the plan, Henry said Jaeger will quadruple its marketing investment to £8m over the next five years and re-focus its efforts on promoting the retailer's "core heritage brand" and strong design tradition, focusing on the over 35s. Discussions are currently underway on the detail for a new high-level marketing strategy, though plans to axe Jaeger's two sub-brands Jaeger London and the younger-aimed Boutique have been confirmed, after they failed to capture a younger audience for the brand. However, Jaeger – which has 40 outlets including its flagship Regent Street branch – will refurbish its sites, as well as making plans to increase the number of concessions it runs in stores including House of Fraser and John Lewis. Jaeger outlines five-year strategy to revamp brand and draw on heritage. In pictures: Jaeger unveils new-look store on Chelsea's King's Road.

Facebook Bets on Bots for Its Messenger App. “We all have a desire to be understood and relate to each other,” Mr. Zuckerberg said. “We’re always trying to get closer to capturing the purest form.” Facebook’s push into chatbots, which is part of that vision, follows other recent signs of bot life. Late last month, Microsoft released a bot called Tay that was designed to have discussions with people on Twitter — only to curtail the effort when people taught the software to repeat racist and other offensive remarks. Who's building the perfect personal shopping app? — Barattieri Collective. Translating the luxury experience online is a battle being fought on multiple fronts. Pure players are trying to grab you by luring exclusive collaborations, department stores are trying the multi-brand bait, and brands themselves are working desperately to replicate the physical experience online. As consumers, the e-commerce experience has dramatically changed the way we shop, yet in luxury fashion there's still a hole in the market where skilled sales associates and personal shoppers reign supreme.

Even as retailers learn more about us through our clicks, likes, and purchases, we're often delivered sub-par optimised experiences wherever we shop. This is because what algorithms lack, to put it frankly, is taste. The future of retail - personal shoppers for all? Sophisticated email marketing techniques are leading only one way Everyone who works in retail knows that the landscape is always changing, driven by evolving customer behaviour and technology.

There’s plenty of comment out there on all the techniques and tactics being deployed and the sophisticated ways retail marketers are interacting with their customers (I even wrote something on the subject a few weeks back) but I can’t help but ask myself, what’s the end goal here? By this I don’t mean ‘what are marketers working towards?’ The rise of the high-end street: Zara, Whistles and Cos pioneer a new age for our high-street. Like Countryfile and a £1.30 sandwich from dear old M&S (you know the one), the lure of the great British high street is its delicious familiarity. As shoppers with depleted bank balances dancing in our eyes, we head to our favourite multi-faceted fashion mecca to buy the clothes we love at the prices we expect. Surprises — pleasant or otherwise — are few and far between. But change is afoot. Look hard at the rails of Zara and you’ll find that all is not as it seems.

High-end Designers tying up with High street brands. It’s natural to expect media interest in the launch of the British Olympic team’s kit. But if the adidas range had not been designed by Stella McCartney, would it have attracted such extensive media coverage? And would customers have been queuing outside H&M’s flagship branches overnight for a new collection if Marni had not been at the helm?

These are the latest high-profile examples of a growing phenomenon—the designer/brand tie-up. It started with the high street bringing in top-end names, but is now also a tool in the luxury market, as traditional brands upgrade by working with designers, or add to their product offer by tying in with a hot name from another discipline. The idea is that a well-known designer and a famous brand will be even stronger if linked in a capsule collection.