ReadyDAQ: 3 Reasons to Automate Software Testing. You’re not a true developer if you don’t firmly believe that software is capable of anything. 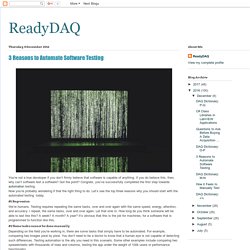 If you do believe this, then, why can’t software test a software? Got the point? Congrats, you’ve successfully completed the first step towards automation testing. Now you’re probably wondering if that the right thing to do. Let’s see the top three reasons why you should start with the automated testing today. #1 Regression We’re humans. . #2 Some tasks cannot be done manually Depending on the field you’re working in, there are some tasks that simply have to be automated. . #3 Parallel testing Although it is theoretically possible, testing an app on different browsers and multiple operating systems at the same time is virtually impossible. How it Feels to Manually Test. Skip to main content Search form. 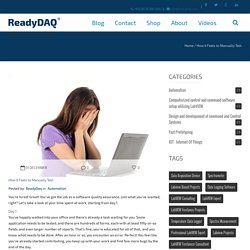 ReadyDAQ: DAQ Dictionary: I. The newest edition of DAQ dictionary brings the most important terms in data acquisition starting with the letter I. 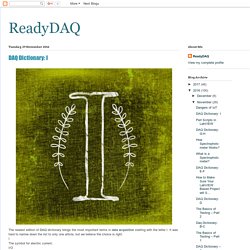 It was hard to narrow down the list to only one article, but we believe the choice is right. I The symbol for electric current. Perl Scripts in LabVIEW. ReadyDAQ: How Spectrophotometer Works? In order to accurately understand how does a spectrophotometer work, the first thing you need to understand is how color functions. 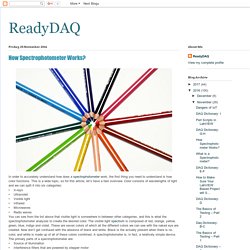 This is a wide topic, so for this article, let’s have a fast overview. Color consists of wavelengths of light and we can split it into six categories: • X-rays • Ultraviolet • Visible light • Infrared • Microwaves • Radio waves You can see from the list above that visible light is somewhere in between other categories, and this is what the spectrophotometer analyzes to create the desired color. The visible light spectrum is composed of red, orange, yellow, green, blue, indigo and violet. These are seven colors of which all the different colors we can see with the naked eye are created.

What is a Spectrophotometer? Skip to main content Search form. 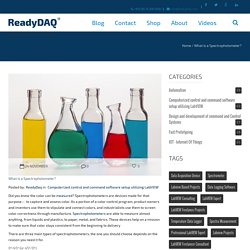 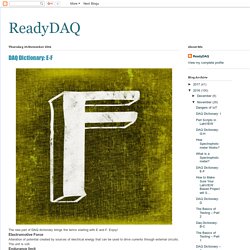 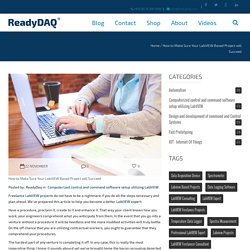 ReadyDAQ: DAQ Dictionary: D. We’ve learned so far that data acquisition is a vast area to be learned over night. 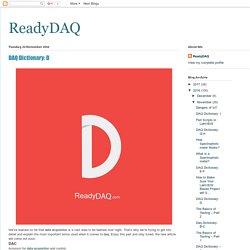 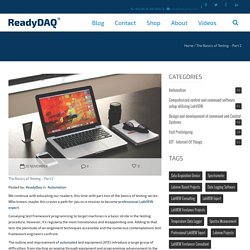 ReadyDAQ: Daq Dictionary: B-C. The daq dictionary continues with B-C part with a goal to get you closer to data acquisition. 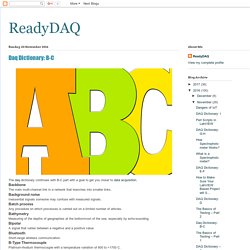 Backbone The main multi-channel link in a network that branches into smaller links. Background noise Inessential signals someone may confuse with measured signals. Batch process Any procedure on which processes is carried out on a limited number of articles. The Basics of Testing – Part 1. Skip to main content Search form The Basics of Testing – Part 1 You are here Home / The Basics of Testing – Part 1 18 November. ReadyDAQ: DAQ Dictionary – A. In this new series, we’re going to go through the alphabet of data acquisition and try to closely explain the terms used in the field. The articles with new terms will be published twice a week, so make sure you don’t miss any of them if you want to learn the “language” of data acquisition. First things first, we start with A. Absolute Accuracy How close the measured value is to the real value. Time Sensitive Networks. In spite of emerging from the stagnant and typically slow moving field of standards bodies, time sensitive networks did not take long to enter the game and bring some key IoT applications,from electrical power grids to autonomous vehicles.

First of all, the difficulties that can exist amongst IT and OT aggregates inside associations aren't simply basic or philosophical—they can be specialized as well. By interfacing a control arrange running a few electrical "fans" to an IT system that conveyed some video movement without incorporating support for the sort of basic planning synchronization abilities that Time delicate systems offer, the operation of the control system was adversely affected.

We’ve gathered 3 more tips for spectrum measurement, and we conclude the series with this part. Tips for Improving Spectrum Measurement – Part 2. ReadyDAQ: Tips for Improving Spectrum Measurement – Part 1. The things are changing. Spectrum is getting more and more crowded, so detecting a single source can be challenging sometimes. Internet of Everything. ReadyDAQ: Why Graphical Programming isn’t More Popular? We’re facing an often asked, yet somehow a redundant question.

Asking this is a little lie asking why picture books are less popular than books written using the alphabet. The thing with programming is that once you have spent enough time learning it (the same applies for math or English) you realize that it is an extremely expressive and powerful tool that can express a large range of things in a precise way.

In fact, it's so great that once you are used to it, you can work so fast in it that visual tools are just the obstacles. Even with a language as simple as HTML, the one that actually CAN be visualized with editors like DreamWeaver, most professionals, and advanced amateurs tend to spend a huge amount of time in the textual part of the app. Where Are Temperature Data Loggers Used? ReadyDAQ: When the Data Gets Lost... There are thousands of possible situations where data can get lost. Are You Using this Tool in LabVIEW? ReadyDAQ: Aviation and IoT. In 2013, air traffic got to the number of 3 billion passengers around the world since 1970, which is a huge milestone. It’s the safest, fastest and often the cheapest mean of transportation, so it is expected that these numbers will only rise.