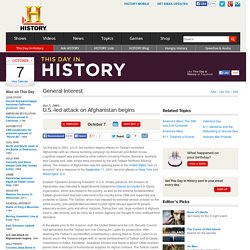 -led coalition begins attacks on Taliban-controlled Afghanistan with an intense bombing campaign by American and British forces. Logistical support was provided by other nations including France, Germany, Australia and Canada and, later, troops were provided by the anti-Taliban Northern Alliance rebels. The invasion of Afghanistan was the opening salvo in the United States "war on terrorism" and a response to the September 11, 2001, terrorist attacks on New York and Washington, D.C. Dubbed "Operation Enduring Freedom" in U.S. military parlance, the invasion of Afghanistan was intended to target terrorist mastermind Osama bin Laden's al-Qaida organization, which was based in the country, as well as the extreme fundamentalist Taliban government that had ruled most of the country since 1996 and supported and protected al-Qaida. Facts & Figures. Afghanistan's recent history is a story of war and civil unrest. 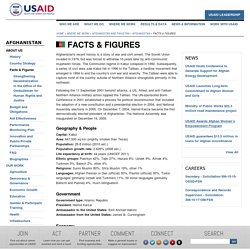 The Soviet Union invaded in 1979, but was forced to withdraw 10 years later by anti-Communist mujahedin forces. The Communist regime in Kabul collapsed in 1992. Subsequently, a series of civil wars saw Kabul fall in 1996 to the Taliban, a hardline movement that emerged in 1994 to end the country's civil war and anarchy. The Taliban were able to capture most of the country outside of Northern Alliance strongholds primarily in the northeast. Following the 11 September 2001 terrorist attacks, a US, Allied, and anti-Taliban Northern Alliance military action toppled the Taliban. Geography & People Capital: Kabul Area: 647,500 sq km (slightly smaller than Texas) Population: 29.8 million (2010 est.) Population growth rate: 2.626% (2008 est.) Operation Enduring Freedom Fast Facts.

Afghanistan War. Fact Sheet: Bringing the U.S. War in Afghanistan to a Responsible End. The White House Office of the Press Secretary For Immediate Release May 27, 2014 Since the attacks of September 11, 2001, the United States and Afghanistan have partnered together to respond to threats to international peace and security and to help the Afghan people chart a secure, democratic, and prosperous future. 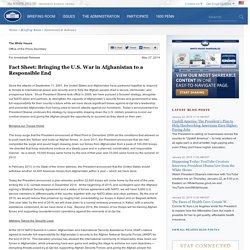 Since President Obama took office in 2009, we have pursued a focused strategy, alongside our NATO allies and partners, to strengthen the capacity of Afghanistan’s security forces and government to take full responsibility for their country’s future while we have struck significant blows against al-Qa’ida’s leadership and prevented Afghanistan from being used to launch attacks against our homeland. Bringing our Troops Home The troop surge that the President announced at West Point in December 2009 set the conditions that allowed us to push back the Taliban and build up Afghan forces.

Afghans Taking the Security Lead. History - The war in Afghanistan (pictures, video, facts & news) U.S. War in Afghanistan - Council on Foreign Relations. Jonah Goldberg: No military dog left behind. Corrections and clarifications: A previous version of this column incorrectly stated the mission of the group, K9s of the War on Terror. 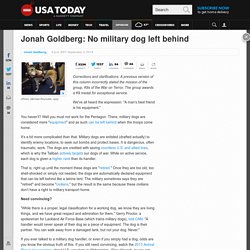 The group awards a K9 medal for exceptional service. We've all heard the expression: "A man's best friend is his equipment. " You haven't? Well you must not work for the Pentagon. There, military dogs are considered mere "equipment" and as such can be left behind when the troops come home. It's a bit more complicated than that. That is, right up until the moment these dogs are "retired. " Need convincing? "While there is a proper, legal classification for a working dog, we know they are living things, and we have great respect and admiration for them," Gerry Proctor, a spokesman for Lackland Air Force Base (which trains military dogs), told CNN.

If you ever talked to a military dog handler, or even if you simply had a dog, odds are you know the obvious truth of this. But that trust often goes unrewarded. Reuniting heroes Legislation pushed by Rep. Military Dogs Sniff Out IEDs, Save Lives. As the desert air cooled and night fell, Staff Sgt. 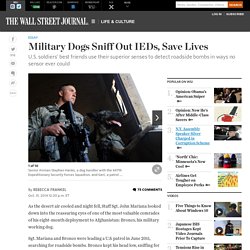 John Mariana looked down into the reassuring eyes of one of the most valuable comrades of his eight-month deployment to Afghanistan: Bronco, his military working dog. Sgt. Mariana and Bronco were leading a U.S. patrol in June 2011, searching for roadside bombs. Bronco kept his head low, sniffing for buried explosives.