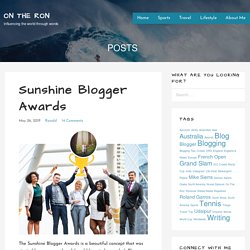 Bloggers all across the globe get nominated by other bloggers and are asked to answer 11 questions. It does not end there as you have to come up with a fresh set of 11 unique questions and tag a host of bloggers and keep this thread going. In hindsight, we have to mention the person who nominated you for the Sunshine Blogger Awards and tag them so that they get notified. This helps in promoting their website and help each other gain a wider audience (like the barter system, ha). I am very fortunate to have been nominated by I Go By Katie and thank her for giving me this wonderful opportunity. Alright then, let us get into the q’s. Q1. A1. Q2. A2. Q3. A3. Q4. A4. Q5. A5. Travel around the world, meet new people, and of course, taste all the local cuisines.Become an accomplished and well-renowned blogger.Get fitter and healthier because I REALLY need to (started working on this).

Vinni's Collection - Online Fashion Hub Spot - ON THE RON. Vinni’s Collection is an Instagram fashion page that commenced last year in the month of November. 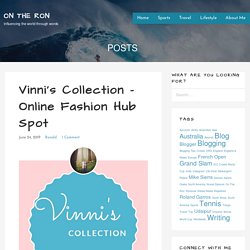 Since then, this Insta page has crossed over 1,100+ authentic followers and is slowly but surely gaining prominence. Ashleigh Barty: Brisbane Heat Cricketer to Roland Garros Champion - ON THE RON. Roughly three years ago, Ashleigh Barty, the young 20-year-old Queenslander was playing for the Brisbane Heat in the inaugural edition of the Women’s Big Bang League after almost giving up hope from professional tennis. 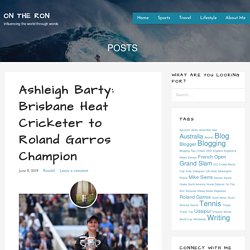 Fast forward to three years and Ash Barty is now a Grand Slam winner! Life has changed and how, for the now 23-year-old who is now an Aussie superstar. Not many gave Barty a chance to win the title, especially after iffy performances at Madrid (quarterfinals) and Rome (2nd round). Ashleigh Barty’s Dream French Open Run The Australian began her Roland Garros campaign in style with three successive straight sets wins over USA’s Jessica Pegula, USA’s Danielle Collins, and Germany’s Andrea Petkovic. In the quarters, she faced yet another American in Madison Keys, whom she defeated quite easily. Then arrived the final, where both she and her opponent Czech Republic’s Marketa Vondrousova were playing in their maiden Grand Slam final. Things I Believed As a Kid That Weren't True - ON THE RON. Did You Know These Words Were Actually Acronyms? - ON THE RON. In the current fast-paced world, acronyms are something that people have been constantly using. 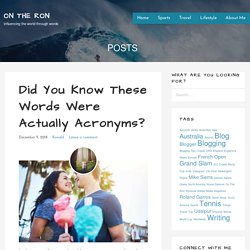 It not only helps to you shorten long sentences but saves time and obviously energy. Regardless of how old you are, you always tend to learn something new every day. I too, have learnt something new about words that were actually acronyms and thought of sharing them with you guys. Always remember, it is KEY to “Keep Educating Yourself”. There you go, an acronym right there which I never knew even existed. Image Courtesy: Osage CS Okay, so this acronym might be simple to most of you but trust me for me it wasn’t.

Image Courtesy: Life Hacks. Things I Never Knew Had A Purpose - ON THE RON. There are numerous things I’ve come across and wondered what is it’s purpose for, but never really took the effort to delve deep and enhance my knowledge. 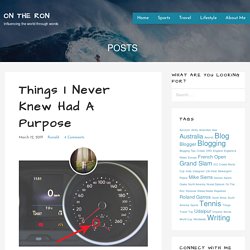 Probably because laziness kicks in. Not anymore though. Okay, so here’s a list of things I never knew had a purpose, until now! #1. Mini Jeans Pocket. 7 Places I Wish to Visit in 7 Continents - ON THE RON. Ever since I was a kid, I dreamt of travelling every nook and corner of the world. 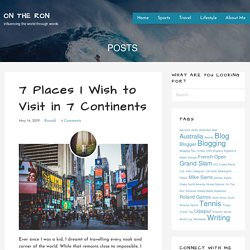 While that remains close to impossible, I still have hope of at least visiting 75 countries before I leave planet Earth. As of now, that seems a distant dream, but a voice inside of me keeps yelling the words “if you believe, you will achieve.” And hey, you know what, I WILL ACHIEVE IT (fingers crossed)! There are many places on Earth that I wish to visit. In fact, every continent has its own speciality. So I’ve jotted down the places I wish to visit in every continent. North America – New York City Arguably the best city in the whole wide world, New York City would be on every traveller or persons ‘must visit places before I die’ list. Statue of Liberty National MonumentBrooklyn BridgeCentral ParkTimes SquareRockefeller CentreEmpire State Building South America – Buenos Aires La BocaPlaza de MayoObeliscoGalerías PacíficoMuseo Nacional de Bellas ArtesEl Ateneo Grand Splendid Europe – Paris Asia – Sri Lanka.

ICC Cricket World Cup 2019 - My Predictions - ON THE RON. The atmosphere at home, on the streets and at the stadiums in England and Wales are about to get a lot more vociferous. 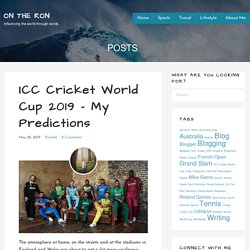 And we all know why because on 30th May the ICC Cricket World Cup is back. Fans, and even the ones who don’t come under the ‘cricket freak’ bracket, are super excited about this mega or should I say, blockbuster event. While the whole world awaits this grand showdown, I’m pretty sure people have already made their predictions on who will be crowned champions of the world on 14th July.