Every Author Is a Celebrity in the James Franco Review - Slog - The Stranger. Hawking: Black holes store information - BBC News. Black holes preserve information about the stuff that falls into them, according to Prof Stephen Hawking. 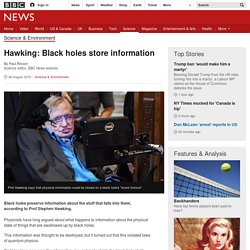 Physicists have long argued about what happens to information about the physical state of things that are swallowed up by black holes. This information was thought to be destroyed, but it turned out that this violated laws of quantum physics. Prof Hawking now says the information may not make it into the black hole at all, but is held on its boundary. In broad terms, black holes are regions in space where the gravity is so strong that nothing that gets pulled in - even light - can escape.

<em>The End of the Tour</em> Fails to Capture the Energy of its Subject  Brain drain: ‘Missing link’ discovered in the brain. By Tamar Haspel August 21, 2015 As the world population grows, we have a pressing need to eat better and farm better, and those of us trying to figure out how to do those things have pointed at lots of different foods as problematic. 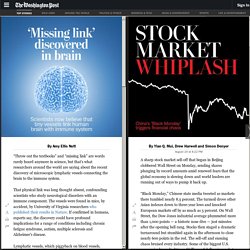 Almonds, for their water use. Corn, for the monoculture. Beef, for its greenhouse gases. There’s one food, though, that has almost nothing going for it. It’s salad, and here are three main reasons why we need to rethink it. Salad vegetables are pitifully low in nutrition. In July, when I wrote a piece defending corn on the calories-per-acre metric, a number of people wrote to tell me I was ignoring nutrition. One of the people I heard from about nutrition is organic consultant Charles Benbrook. Those foods’ nutritional profile can be partly explained by one simple fact: They’re almost all water.

Millennials Are Foodies: Consequences for Restaurants, Agriculture, and Grocery Stores. When Eve Turow returned to her college campus for her five-year reunion, she realized that she’d changed: Back when she was in college, she was content subsisting on “gelatinous brown rice, pre-cooked mushy pinto beans, [and] blocks of bouncy tofu.” 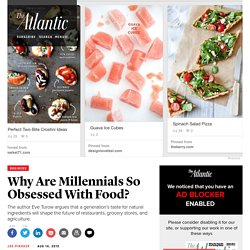 But if she were in college now, she says, she’d be taking rice-bowl inspiration from Pinterest and making good use of the nearby farmer’s market and the greenhouse attached to the science library. In her recent book A Taste of Generation Yum: How the Millennial Generation’s Love for Organic Fare, Celebrity Chefs, and Microbrews Will Make or Break the Future of Food, Turow, who has written about food for NPR’s website and has worked as an assistant to Mark Bittman, tries to figure out why food came to be something she and her generation obsesses over. Turow’s theory is that in a digital-first era, many people latch onto food as something that engages all of the senses and brings people together in physical space. Beauty is Shoe. Plato bequeathed us a trio of ultimate values—truth, beauty, and goodness—but through the ages, the arts have been most closely allied with beauty. 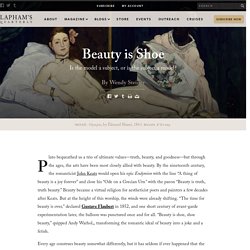 By the nineteenth century, the romanticist John Keats would open his epic Endymion with the line “A thing of beauty is a joy forever” and close his “Ode on a Grecian Urn” with the paeon “Beauty is truth, truth beauty.” Beauty became a virtual religion for aestheticist poets and painters a few decades after Keats. But at the height of this worship, the winds were already shifting. “The time for beauty is over,” declared Gustave Flaubert in 1852, and one short century of avant-garde experimentation later, the balloon was punctured once and for all. The 50 Best Films Of The Decade So Far. By The Playlist Staff | The Playlist February 26, 2015 at 3:21PM As the dust cleared from our Best of 2014 features, 2015 previews and awards season coverage, we realized something terrifying: we’re now halfway through the current decade. 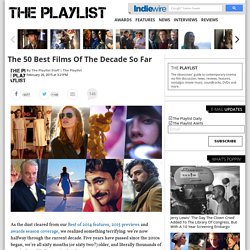 Five years have passed since the 2010s began, we’re all sixty months (or sixty two?) Older, and literally thousands of movies have hit theaters in that time. So what better time to take stock of the decade thus far? Businessinsider. TS Eliot and the search for perfection (Lyndall Gordon) by Royal Society Literature. What Each Myers-Briggs Personality Type Is Like As A Friend.

ENFP: The excitable yet surprisingly insightful friend who subtly gives you a pep talk every time you hang out and leaves you feeling like you could be the next President. 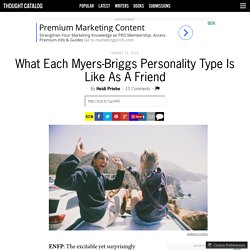 ESFJ: The friend who lets you live at their house for two weeks after you break up with your significant other so they can make sure you’re eating, sleeping and going to work like a functioning human being. ENTJ: The successful and slightly bossy friend who is constantly challenging you to reach your full potential – because they see it in you, even when you don’t see it in yourself. ISTJ: The super-organized friend who always shows up fifteen minutes early for your hangouts and whom you’d pretty much trust with your life.

What did “True Detective” in: How Nic Pizzolatto gambled on a risky plot and destroyed his actual story. Was it bad? 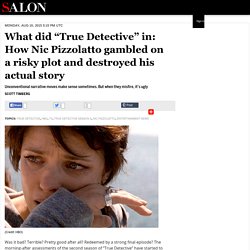 Terrible? Pretty good after all? Redeemed by a strong final episode? The morning-after assessments of the second season of “True Detective” have started to roll in, and most of them aren’t pretty. Ethan Hawke: ‘Mining your life is the only way to stumble on anything real' Megyn Kelly Responds To Donald Trump: "I Certainly Will Not Apologize For Doing Good Journalism" Adorno’s Essay on “Free Time” One of my favorite essays of Adorno’s—and one of his most accessible—is his essay on “free time.” 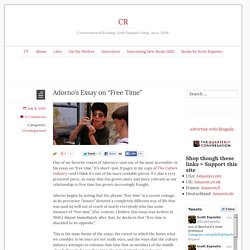 It’s short—just 11 pages in my copy of The Culture Industry—and I think it’s one of his more readable pieces. Teaching philosophy in schools has huge impacts. Sean Gallup/Getty Images America may be great at many things, but education isn't one of them. 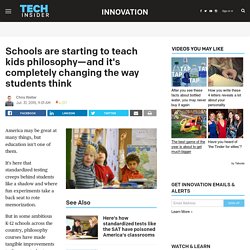 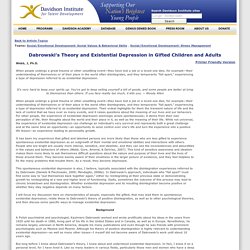 When people undergo a great trauma or other unsettling event—they have lost a job or a loved one dies, for example—their understanding of themselves or of their place in the world often disintegrates, and they temporarily "fall apart," experiencing a type of depression referred to as existential depression. It's very hard to keep your spirits up. You've got to keep selling yourself a bill of goods, and some people are better at lying to themselves than others. Before Midnight: How Richard Linklater's Trilogy Defined My Generation. In the mid-nineties, I was a college student who wore steel-toed boots and flannel shirts that swallowed my frame, and I spent my days in courtyards and coffee shops talking about boys, and philosophy, and the philosophy of boys. Proust on What Art Does for the Soul and How to Stop Letting Habit Blunt Our Aliveness.

You End Up Becoming Yourself - The Indy. The Mystery of the Everyday: Boyhood. Ellar Coltrane in Richard Linklater’s Boyhood Boyhood, the new movie from director Richard Linklater, defies comparison; I have never seen anything like it. Filmed over the course of twelve years, it follows one Texas boy, Mason, from elementary school to his late teens using the same actor, Ellar Coltrane. And not just him, but his entire family as well, with their respective performers: Lorelei Linklater (the director’s daughter), as older sister Samantha; Patricia Arquette, the single mom; Ethan Hawke, their weekend father; and assorted relatives, partners, and friends. As if this casting philosophy wasn’t unorthodox enough, Linklater also eschews conventional narrative and plot devices.

As I Walked Out One Evening by W. H. Auden. Full text of "Post Pop Cinema - The Search for Meaning in New American Film" Proust's Ruined Mirror. By Jonathan Wallace jw@bway.net When I was a child, my parents frequently had other adults over to the house. These were often professional acquaintances whom they didn't know very well. I was expected to put in an appearance, stay for awhile if not the whole duration of the visit, and establish that I was an intelligent, well-mannered child. Since these visits were often appallingly tedious for me, my parents would sometimes, in advance, attempt to pique my interest about a particular visitor.

On one occasion, my father, with the air of sharing a morsel that should particularly delight me, told me that a doctor coming to the house that afternoon had once made his own reflector telescope, including grinding the mirror. The guest was a mild-mannered, self-deprecating man. I came away with something of a sense of having been suckered: the supposed enthusiast had nothing to tell me, had never tried again and was no longer even an amateur astronomer.

The impossibility of knowledge Conclusion. James Baldwin on the Creative Process and the Artist’s Responsibility to Society. By Maria Popova. You are your life, and nothing else. The-Philosophy-of-Creativity-Gaut.pdf.