Predictions: Children won't know what snow is in the UK. The ski industry will collapse because there won't be enough snow. Winter will become more severe and extreme, with more snow than ever. All caused by a trace gas!

Reality: The extent of snow cover is a complex phenomenon.

Arctic ice (see that section) has much to do with ocean cycles. It is possible to cherry pick observations of less snow and milder winters or more snow and colder winters. A good source for "cold news" is the blog "Ice Age Now". Predictions: End of Snow.

Polar Vortex. Remember, The British MET Called the End of Snow Last December – Watts Up With That? Guest essay by Eric Worrall h/t Dave Gadziala; Three months ago, WUWT reported on the MET issuing a new end of snow prediction. 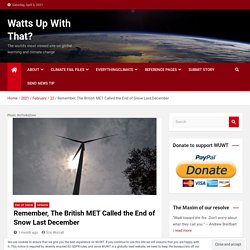 At the time I thought it was funny; but given the catastrophic failure of the electricity grid in Texas, and soaring heating bills in Britain, perhaps it is time to reflect on how much damage the people making such predictions might be doing to people’s lives. From December; Climate change: Snowy UK winters could become thing of the pastBy Justin RowlattChief environment correspondentPublished6 December 2020Snowy winters could become a thing of the past as climate change affects the UK, Met Office analysis suggests.It is one of a series of projections about how UK’s climate could change, shared with BBC Panorama.It suggests by the 2040s most of southern England could no longer see sub-zero days.

“People underestimate the power of models. This is a group of people who openly admit they are unmoved by observational evidence which contradicts their worldview. Related. CLAIM: Global Warming is Causing More Severe Winters – Watts Up With That? Guest essay by Eric Worrall They predicted colder winters, right? 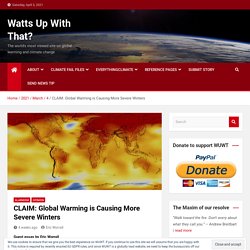 And warmer winters. Climate scientists are dashing for “The Day after Tomorrow” insurance policy, after a “cold blob” broke off the Arctic. How the ‘cold blob’ is slowing down our oceans – and what it meansBy 9News StaffCNN5:12pm Mar 4, 2021The “cold blob” sounds like a rejected monster from a 1950s horror show – but new research shows it could be bringing some very scary climate changes indeed.The world’s major ocean currents are slowing down, and though the consequences will not be as immediate or dramatic as in Hollywood fiction, there are real-world impacts for global weather patterns and sea levels.The slowdown of ocean circulation is directly caused by warming global temperatures and has been predicted by climate scientists.

“This has been predicted, basically, for decades that this circulation would weaken in response to global warming. No possible temperature change will ever falsify alarmist climate theories. End of Snow? Finland Thinks Their Winter Snow Might Not Melt This Summer – Watts Up With That? The Northwest (US) Snowpack Trend of the Past Fifty Years: The Truth May Surprise You – Watts Up With That? Reposted from Cliff Mass Weather Blog The media is full of stories suggesting that global warming has greatly reduced the mountain snowpack in the Pacific Northwest. 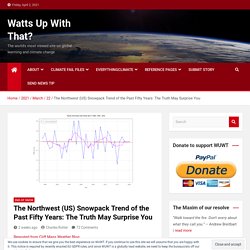 Activist “climate justice” groups like 350Seattle have taken the snowpack loss claims even further, suggesting the current snowpack is “half what it should be”: But the truth, backed by observations, contradicts such apocalyptic descriptions, as I will show you in the blog.Recently, the Office of the Washington State Climatologist (who is Dr. Nick Bond of UW JISAO) put online a wonderful tool for visualizing snowpack at some major locations in Washington State. Observed vs Predicted Trends in Northern Hemisphere Snow Cover. 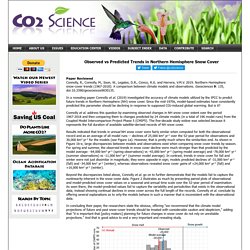 Northern Hemisphere snow-cover trends (1967-2018): A comparison between climate models and observations. Geosciences 9: 135, doi:10.3390/geosciences9030135. Declining Spring Snowcover Update. CNN End of Snow: “Climate change is threatening winter sports’ very existence” Guest essay by Eric Worrall As much of the USA experienced an abundance of the white stuff, CNN picked this as a good time to make an “end of snow” prediction. 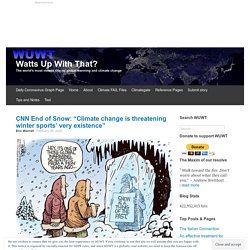 Climate change is threatening winter sports’ very existenceBy Derek Van Dam, CNN MeteorologistUpdated 1904 GMT (0304 HKT) February 29, 2020(CNN)A warming planet has major ramifications on winter snowpack across the globe, including a long-term drying trend for many. That’s a concern for winter sports enthusiasts and communities that depend on snow throughout the year. Not many understand this better than the climate advocacy group known as Protect Our Winters (POW). The group is an organization of professional athletes and like-minded individuals fighting for policy to protect winter sports and mountain communities.

Climate catastrophists just can’t help themselves. Climate Emergency Tour: Ski Resorts Edition. Nothing would upset the jet-setting climate celebrity crowd more this time of year than to discover that the snow cover at their favourite ski resorts is less than expected. 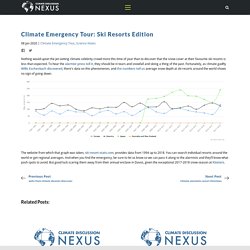 To hear the alarmist press tell it, they should be in tears and snowfall and skiing a thing of the past. Fortunately, as climate gadfly Willis Eschenbach discovered, there's data on this phenomenon, and the numbers tell us average snow depth at ski resorts around the world shows no sign of going down. The website from which that graph was taken, ski-resort-stats.com, provides data from 1994 up to 2018. You can search individual resorts around the world or get regional averages. And when you find the emergency, be sure to let us know so we can pass it along to the alarmists and they’ll know what posh spots to avoid. Data: Northern Hemisphere Fall/Winter Snow Cover Continues To Climb. Arctic Ice Mass Stabilizes. By P Gosselin on 29. 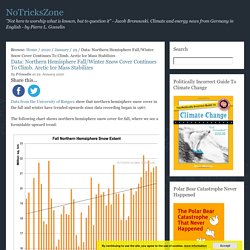 January 2020. Warming and the Snows of Yesteryear. Reposted from American Thinker By Gregory Wrightstone I was recently reminded of one of the most common misconceptions about our changing climate that is often accepted as fact by climate skeptics and true believers alike. 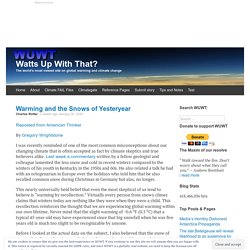 Last week a commentary written by a fellow geologist and colleague lamented the less snow and cold in recent winters compared to the winters of his youth in Kentucky in the 1950s and 60s. He also related a talk he had with an octogenarian in Europe over the holidays who told him that he also recalled common snow during Christmas in Germany but alas, no longer. Rutgers University Global Snow Lab and “the Snows of Yesteryear” Guest “geologist tag-teaming” by David Middleton This is a follow up to Gregory Wrightstone’s article from yesterday. 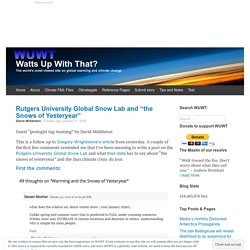 A couple of the first few comments reminded me that I’ve been meaning to write a post on the Rutgers University Global Snow Lab and what their data has to say about “the snows of yesteryear” and the faux climate crisis du jour. First the comments: Second, Loydo. Correcting False Claims. Climate Central says North American snow cover is on the decline, and it is due in part to winter precipitation falling as rain rather than snow. 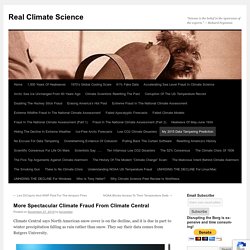 They say their data comes from Rutgers University. Snow Cover on the Decline in North America | Climate Central The actual data from Rutgers University shows 50 years of increasing winter snow extent. Climate Central is simply making things up – like they normally do. NorAm Winter Same story with Autumn snow cover. NorAm Fall. Global Warming Claim: More Blockbuster Snowstorms, Less Snow. Guest essay by Eric Worrall Climate scientists struggling to reconcile model predictions of the end of snow with the observed abundance of white stuff have come up with a way to predict more and less snow at the same time. With climate change, Washington may have entered era of more blockbuster snowstorms but less snow overallBy Andrew FreedmanNovember 26A largely deserted Connecticut Avenue around Dupont Circle during the beginning of the Snowzilla storm on Jan. 22, 2016, in Washington. Scientists: Global warming is not causing harsh winter weather

Record Snowfall Across Himalayas Blamed On ... Global Warming - The Global Warming Policy Forum. No wonder the public is increasingly sceptical about these kind of knee-jerk claims and predictions. The unprecedented snowfall and prolonged cold weather in the Himalayan region this winter was caused by global warming, a weather scientist in Almora said Monday.The trend will continue in the coming years as global weather patterns are changing rapidly, said Dr Sandeepan Mukherjee, a weather scientist at GB Pant National Institute of Himalayan Environment and Sustainable Development based at Kosi in Almora. “The erratic patterns of western disturbances, that cause rain and snowfall in winter months in the northern part of the globe, have become so due to the changing patterns of weather caused by global warming,” he said.

Full story. Cold Waves and CO2. There is no [statistically significant] snow cover trend due to global warming since 1972 in the Northern Hemisphere. From the “alarmists and their cats are grumpy over this” department. There’s been some recent hubbub over decreasing snowfall in the northern hemisphere by the usual suspects, who claim that AGW is reducing snow cover. And then of course, there’s Dr. Christy on Sierra Snowfall over the last 130 years – no trend, no effect from CO2. Better late than never, we got a little bit busy this week. Image above from data supplied by Dr. John Christy and rendered by the San Francisco Chronicle from their story here. Climate Change Indicators : Snow Cover. US Blizzards, Snowfalls Have Increased Since1950s, Surprising Global Warming Climatologists. On January 4 NTZ weekly contributor Kenneth Richard published a list of 485 papers dumping cold water on climate alarmism in 2017.

The Kevin Trenberth Effect: Pulling Science Back to the Dark Ages. Part two – The Big Snow Job. Great Lakes Global Warming Update. Toto Continues His Research Into The Night. Flip-flopping through the snowdrifts. 2 Mar 11 - "The Union of Concerned Scientists sponsored a workshop on Mt. Washington in 2007 in which they promised ski areas that snow would be hard to come by even in northern areas and they might consider another profession," writes meteorologist Joe D'Aleo. Climate Scam Caving Under Weight Of Snow. The global warming scam is beginning to collapse. Even CBS News Boston is starting to understand. BOSTON (CBS) — Despite the snow blitz of 2015, many baby boomers still insist that, overall, we don’t get the harsh bitter cold and deep snowy winters like we did in the good ole days.

Weather records prove that just isn’t the case and despite the ongoing claims that snows are becoming rare and hurting winter sports, this millennium has been a blessing to snow lovers and winter sports enthusiasts. Ice Age Now - The next ice age could begin any day.