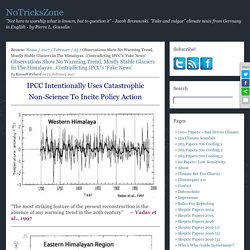 February 2017 “The most striking feature of the present reconstruction is the absence of any warming trend in the 20th century” — Yadav et al., 1997 Bhattacharyya and Chaudhary, 2003 In 2007, IPCC Claimed The Himalayan Region Has Been Warming So Rapidly Its Glaciers Would ‘Disappear’ By 2035 “Glaciers in the Himalaya are receding faster than in any other part of the world and, if the present rate continues, the likelihood of them disappearing by the year 2035 and perhaps sooner is very high if the Earth keeps warming at the current rate.

IPCC’s Fake Glacier Melt Claim Came From Activists, Intentionally Put In To Spur Policymakers To Action David Rose, UK Daily Mail “The claim that Himalayan glaciers are set to disappear by 2035 rests on two 1999 magazine [phone] interviews with glaciologist Syed Hasnain, which were then recycled without any further investigation in a 2005 report by the environmental [activist] group WWF. Look What Your SUV Did Before 1940. A standard trick for climate alarmists is to post before and after pictures showing what your SUV did to glaciers over the past century. 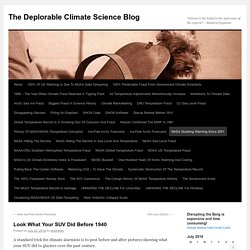 They don’t mention that the ice loss occurred before 1940. The National Geographic Archive And never mind that the glaciers were much smaller during the Medieval Warm Period, or when Hannibal took elephants across the Alps. from perhaps the tenth to the sixteenth centuries, the glaciers of the Alps were much less extensive than at present.At present they are in general retreating … almost as rapid as at Glacier Bay (Alaska)National Geographic 1892 National Geographic Weren’t Always MWP Deniers | The Deplorable Climate Science Blog. German Geology Expert: Glaciers Are Not Melting “Faster Than Ever” …Requests Statement From Deutsche Welle. Geologist and climate science site “Die kalte Sonne” operator Dr. 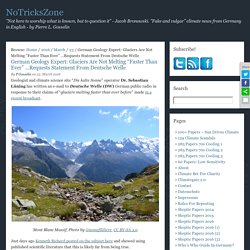 Sebastian Lüning has written an e-mail to Deutsche Welle (DW) German public radio in response to their claims of “glaciers melting faster than ever before” made in a recent broadcast. Mont Blanc Massif, Photo by Gnomefililiere, CC BY-SA 3.0 Just days ago Kenneth Richard posted on the subject here and showed using published scientific literature that this is likely far from being true. In recent years, the documented rise in sea levels contributed from glacier and ice sheet melt has not come close to reaching the high levels attained during the 1920s and 1930s period as documented by Gregory et al., 2013.” Unfortunately Deutsche Welle was sloppy in that they didn’t bother to fact-check, and so as a result they put out overly alarmist information to the public. I translated Dr. To: Deutsche Welle [German Public Television]From: Dr. Readers can also (politely) send the same or similar message to DW, should they wish.

Exit Glacier, Alaska – An Icon Of Climate Fraud. Retreating Exit Glacier has become an icon of climate change – Anchorage Daily News The Exit Glacier in Alaska has been retreating since the Little Ice Age. 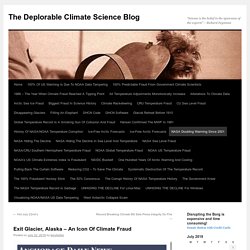 Barack Obama took a selfie in front of the glacier to highlight climate change. In a sense, Obama was correct – the Exit Glacier was retreating much faster one hundred years ago than it is now. The Retreat of Exit Glacier.pdf I took the National Park Service table above, added 600 meters of retreat since 1974 based on the map in the Anchorage Daily News, and graphed the retreat rates since 1815. Spreadsheet. Snowcover Increasing Since 1950s, But Newsweek’s Reality Is That Christmas Snow May Soon Be History. Image Source: 22 December 2017 Newsweek Christmas Day has arrived. 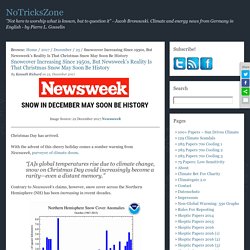 With the advent of this cheery holiday comes a somber warning from Newsweek, purveyor of climate doom. “[A]s global temperatures rise due to climate change, snow on Christmas Day could increasingly become a rarity—even a distant memory.” Contrary to Newsweek‘s claims, however, snow cover across the Northern Hemisphere (NH) has been increasing in recent decades. Image Source: NOAA In the Southern Hemisphere, snow and ice have been expanding in the Antarctic region for centuries (Thomas et al., 2017), and Antarctica is projected to continue gaining ice mass in the decades to come (Lenaerts et al., 2016). Apparently the journalists penning climate alarm scenarios that warn readers white Christmases are on the way out in the NH haven’t been keeping up with the latest scientific publications.