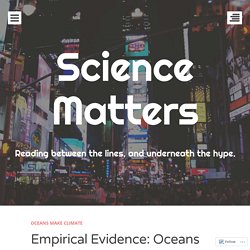 Further update on May 27 at the end. You only have to compare Sea Surface Temperatures (SST) from HADSST3 with estimates of Global Mean Surface Temperatures (GMST) from Hadcrut4 and RSS. This first graph shows how global SST has varied since 1850. Ocean cycles, The Pause and Global Warming. By Andy May h/t Joachim Seifert There is a new post by Dr. 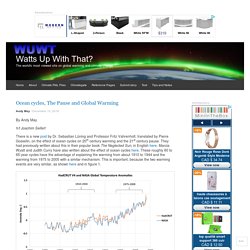 Sebastian Lüning and Professor Fritz Vahrenholt, translated by Pierre Gosselin, on the effect of ocean cycles on 20th century warming and the 21st century pause. They had previously written about this in their popular book The Neglected Sun, in English here. A Shower Of Papers, New Climate Models, Show Natural Oceanic Cycles The Recent Major Climate Factor! 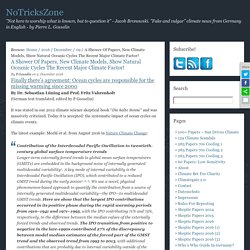 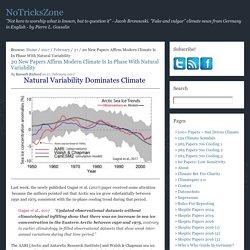 February 2017 Last week, the newly published Gagné et al. (2017) paper received some attention because the authors pointed out that Arctic sea ice grew substantially between 1950 and 1975, consistent with the in-phase cooling trend during that period. Gagné et al., 2017 “Updated observational datasets without climatological infilling show that there was an increase in sea ice concentration in the Eastern Arctic between 1950 and 1975, contrary to earlier climatology in-filled observational datasets that show weak inter-annual variations during that time period.” The AARI [Arctic and Antarctic Research Institute] and Walsh & Chapman sea ice data sets used in the paper (see graph above) included exclusively observational evidence — “climatological infilling were not included … we only used observed data”. During the early 1950s, CO2 concentrations hovered between 310 and 315 ppm. Warming by [less] Upwelling of Cold Ocean Water. Guest essay by Wim Röst The best kept secret in the ‘climate world’ probably is: the cooling capacity of the deep sea. 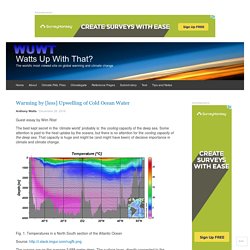 Some attention is paid to the heat uptake by the oceans, but there is no attention for the cooling capacity of the deep sea. That capacity is huge and might be (and might have been) of decisive importance in climate and climate change. Fig. 1. ‘Warming’ and ‘The Pause’ Explained By Wind, Upwelling And Mixing. Cooling and warming the surface of the Earth without energy loss or energy gain: a natural mechanism Guest Post by Wim Röst Abstract Upwelling is a massive force, well visible on world maps. 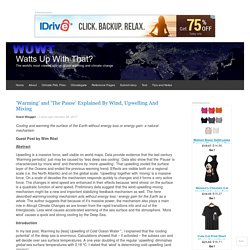 Data provide evidence that the last century ‘Warming period(s)’ just may be caused by ‘less deep sea cooling’. Data also show that the ‘Pause’ is characterized by ‘more wind’ and therefore by ‘more upwelling’. Tisdale: How Much of an Impact Does the Atlantic Multidecadal Oscillation Have on Arctic Sea Ice Extent? Last week I asked Bob Tisdale to take a hard look at potential correlations between the AMO and Arctic sea ice extent, and he rose to the challenge – Anthony Guest post by Bob Tisdale This post presents reference graphs and a discussion of the effects of the Atlantic Multidecadal Oscillation on Arctic sea ice loss. 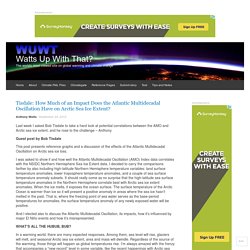 I was asked to show if and how well the Atlantic Multidecadal Oscillation (AMO) Index data correlates with the NSIDC Northern Hemisphere Sea Ice Extent data. NOT A LOT OF PEOPLE KNOW THAT. By Paul Homewood Shock news! 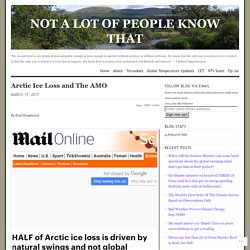 Scientists discover natural climate cycles. From the Mail: The Arctic icecap is shrinking – but it’s not all our fault, a major study of the polar region has found. New Paper: Human Climate Forcing ‘Below Detection’ … Deep Oceans Warm By ‘2°C Within 200 Years’ 100% Naturally. Annotated graph from Rosenthal et al. (2013) illustrating the steep amplitude of natural variations in ocean heat It has long been acknowledged by scientists that significant changes in deep ocean heat content have occurred in the past in the absence of changes or forcing from CO2. 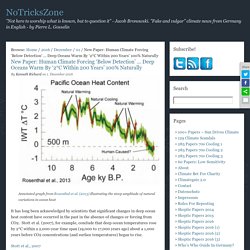 Stott et al. (2007), for example, conclude that deep ocean temperatures rose by 2°C within a 2,000-year time span (19,000 to 17,000 years ago) about a 1,000 years before CO2 concentrations (and surface temperatures) began to rise. Stott et al., 2007. Mann-made Global Cooling. The usual suspects are sounding alarms about the ocean “conveyor belt” AMOC slowing down, and predicting that global warming will result in global cooling. 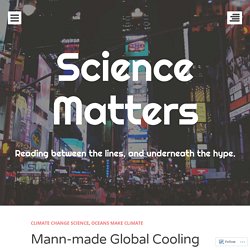 The Ocean’s Conveyor Belt Is Slowing Down: What You Need to Know About AMOC, Greenland and ‘Unprecedented’ Sea Level Rise Using data gathered from ice cores, tree rings and coral samples, the research team (led by the Potsdam Institute for Climate Impact Research in Germany) posits that weakness in the AMOC after 1975 “is an unprecedented event in the past millennium.” Planet Expert Michael Mann co-authored the study and told ClimateCentral that a “full-on collapse” of the AMOC could be possible in the coming decades. The exact consequences will be difficult to predict, but it will definitely have an impact on marine life, which benefits from the nutrients the AMOC delivers up from the ocean depths. Climate Pacemaker: The AMOC. Update May 19, 2015 text added at end. We hear a lot about CO2 as climate’s “control knob, but about the oceans’ pacemaker, AMOC? Not so much. AMO: Atlantic Climate Pulse. I was inspired by David Dilley’s weather forecasting based upon Atlantic water pulsing into the Arctic Ocean (see post: Global Weather Oscillations).

So I went looking for that signal in the AMO dataset, our best long-term measure of sea surface temperature variations in the North Atlantic. For this purpose, I downloaded the AMO Index from Kaplan SST v.2, the unaltered and untrended dataset. By definition, the data are monthly average SSTs interpolated to a 5×5 grid over the North Atlantic basically 0 to 70N. For an overview the graph below presents a comparison between Annual, March and September averages from 1856 to 2016 inclusive. Ocean cycles, The Pause and Global Warming. By Andy May h/t Joachim Seifert There is a new post by Dr. Sebastian Lüning and Professor Fritz Vahrenholt, translated by Pierre Gosselin, on the effect of ocean cycles on 20th century warming and the 21st century pause.

They had previously written about this in their popular book The Neglected Sun, in English here. Marcia Wyatt and Judith Curry have also written about the effect of ocean cycles here. Ocean Surface Temps–How Low Will They Go? Ocean temperature measurements come from a global array of 3,500 Argo floats and other ocean sensors. Credits: Argo Program, Germany/Ifremer We have seen lots of claims about the temperature records for 2016 and 2015 proving dangerous man made warming.

At least one senator stated that in a confirmation hearing. Now that HadSST3 data is complete through February 2017, let’s see how obvious is the ocean’s governing of global average temperatures. Is the ENSO a nonlinear oscillator of the Belousov-Zhabotinsky reaction type? The Amazing BZ reaction in a stirred beaker - time lapse photo - Image via Wikipedia Alternative title: “Standing on the shoulders of Giant Bob” Guest post by Phil Salmon Introduction One of the themes to emerge from the climate debate here on WUWT, concerns “chaos” and nonlinear system dynamics and pattern.

A relationship between Sea Ice Anomalies, SSTs, and the ENSO? Study Reveals The Atmospheric Footprint Of Global Warming Hiatus. No butterflies, just tropical rainfall. Study: El Niño forecasting reliability during the period 2002-2011 declined. ENSO caused by high tidal pulses and by solar activity. An interesting and unique graph that ties ENSO, global temperature and other climate variables together.

The Ocean Climate Spin Zone. Detection and Attribution of Man-made Climate Change. Another New Paper Reveals No Discernible Human Influence On Global Ocean Temperatures, Climate. The Pause hangs on by its fingernails. Political science: a response to 375 concerned members of the National Academy of Sciences.