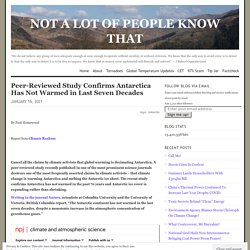 Climate data shows no recent warming in Antarctica, instead a slight cooling. Hiding The Antarctic Sea Ice. I frequently write about how climate alarmists hide Arctic sea ice data prior to 1979, but now they are hiding Antarctic data too – claiming a record low January extent. 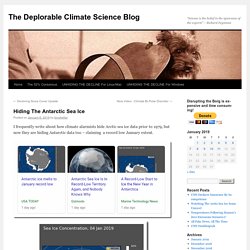 S_20190104_conc_v3.0.png (420×500) As is invariably the case with climate alarmists, they are lying and hiding data. What Emily Shuckburgh Forgot To Tell You. By Paul Homewood h/t Dave Ward Booker had a piece in the Mail the other day about how Scott’s and Shackleton’s records showed that sea ice extent around Antarctica then was little different to today. 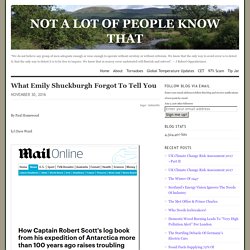 I did not bother reposting it as I had already covered the topic myself. However, it has elicited a hysterical and misleading reply from Dr Emily Shuckburgh of the British Antarctic Survey. Those Stubborn Facts: 35-Year Cooling of South Pole Confirmed By NASA - Antarctica Ice Sheets Safe. The IPCC's climate science has long claimed that human CO2 emissions are producing an accelerated global warming, with a "runaway" warming trend, which is then being amplified in the north and south polar extremes. 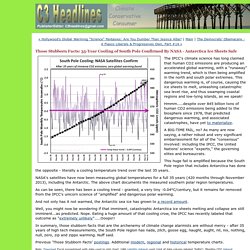 This dangerous warming is, of course, causing the ice sheets to melt, unleashing catastrophic sea level rise, and thus swamping coastal regions and low-lying islands, as we speak! Hmmm.....despite over 845 billion tons of human CO2 emissions being added to the biosphere since 1978, that predicted dangerous warming, and associated catastrophes, have yet to materialize. A BIG-TIME FAIL, no? Antarctica Record High Temp Of 19.8°C In Fact Set 35 Years Ago – When CO2 Was Low. By Dr. 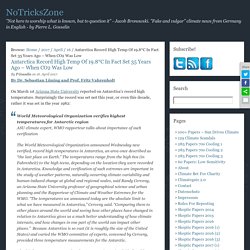 Sebastian Lüning and Prof. Fritz Vahrenholt On March 1st Arizona State University reported on Antarctica’s record high temperature. Surprisingly the record was set not this year, or even this decade, rather it was set in the year 1982: World Meteorological Organization verifies highest temperatures for Antarctic region ASU climate expert, WMO rapporteur talks about importance of such verificationThe World Meteorological Organization announced Wednesday new verified, record high temperatures in Antarctica, an area once described as “the last place on Earth.” Scott and Shackleton logbooks prove Antarctic sea ice is not shrinking 100 years after expeditions. By Paul Homewood h/t Green Sand An interesting article in the Telegraph: Antarctic sea ice had barely changed from where it was 100 years ago, scientists have discovered, after pouring over the logbooks of great polar explorers such as Robert Falcon Scott and Ernest Shackleton. 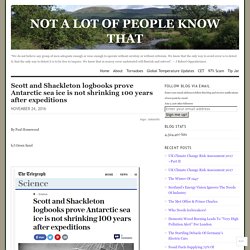 Experts were concerned that ice at the South Pole had declined significantly since the 1950s, which they feared was driven by man-made climate change. Solar Activity Continues Near 200-Year Low. And Antarctic Sea Ice Drop Caused By Natural Factors. Von Frank Bosse und Fritz Vahrenholt (Translated and condensed [due to time constraints] by P. 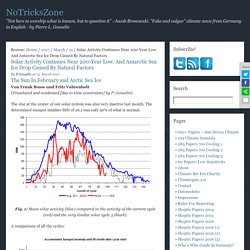 Gosselin) Fig. 1: Mean solar activity (blue) compared to the activity of the current cycle (red) and the very similar solar cycle 5 (black). Antarctic Peninsula Stopped Warming 30 Years Ago. By Paul Homewood We are doubtlessly all aware of claims that the Antarctic Peninsula is one of the fastest warming parts of the world. 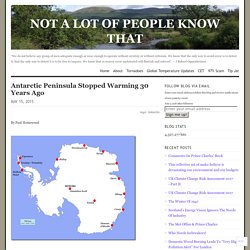 The implication is clear, that this is global warming in action. Yet the story is not quite all that it appears. Let’s look at the GISS temperature records for Rothera and Faraday, on the west side of the peninsula, and the Argentine stations of Esperanza and Marambio on the east. At all four stations, there was a sharp rise in temperatures between 1980 and 1983, since when temperatures appear to have been fairly stable. We can also see from the longer records at Faraday and Esperanza that there was a similar jump in the 1960’s.

Since 1983, there have been ups and downs, notably the drop in the early 1990’s associated with the Pinatubo eruption, but clearly temperatures now are no higher than they were in the mid 1980’s. Surprise: Defying Models, Antarctic Sea Ice Extent 100 Years Ago Similar To Today. By Dr. 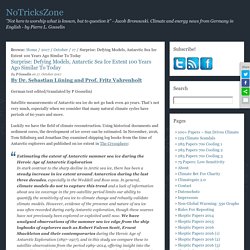 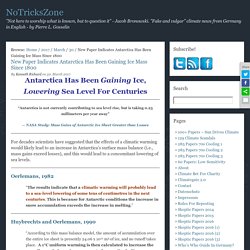 March 2017 “Antarctica is not currently contributing to sea level rise, but is taking 0.23 millimeters per year away” — NASA Study: Mass Gains of Antarctic Ice Sheet Greater than Losses For decades scientists have suggested that the effects of a climatic warming would likely lead to an increase in Antarctica’s surface mass balance (i.e., mass gains exceed losses), and this would lead to a concomitant lowering of sea levels. Oerlemans, 1982 “The results indicate that a climatic warming will probably lead to a sea-level lowering of some tens of centimetres in the next centuries. Huybrechts and Oerlemans, 1990 “According to this mass balance model, the amount of accumulation over the entire ice sheet is presently 24.06 x 1011 m3 of ice, and no runoff takes place. Huybrechts et al., 2004 Lenaerts et al. 2016 Thomas et al., 2017. Trends of air temperature of the Antarctic during the period 1958–2000. Uh oh: Study says ‘collapsing’ Thwaites Glacier in Antarctica melting from geothermal heat, not ‘climate change’ effects.

Remember the wailing from Suzanne Goldenberg over the “collapse” of the Thwaites glacier blaming man-made CO2 effects and the smackdown given to the claim on WUWT? Well, never mind. From the University of Texas at Austin and the “you can stop your wailing now” department, comes this really, really, inconvenient truth.