Firecrackers: A dilemma between life and a religious practice. Ricky Chopra International Counsels is one of the Best Law Firm in Gurgaon. 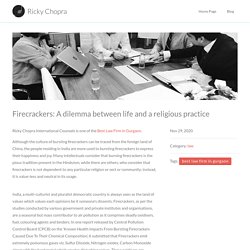 Although the culture of bursting firecrackers can be traced from the foreign land of China, the people residing in India are more used to bursting firecrackers to express their happiness and joy. Many intellectuals consider that burning firecrackers is the pious tradition present in the Hinduism, while there are others, who consider that firecrackers is not dependent to any particular religion or sect or community; instead, it is value-less and neutral in its usage. India, a multi-culturist and pluralist democratic country is always seen as the land of values which values each opinions be it someone’s dissents.

Firecrackers, as per the studies conducted by various government and private institutes and organisations, are a seasonal but mass contributor to air pollution as it comprises deadly oxidisers, fuel, colouring agents and binders. Laws Regulating Drugs and Medical Devices. Foreign Exchange Laws of India. Reliance Retail Finalizes Acquisition of Future Retail. The deal has been entered into at a strategic time when retail majors are vying to dominate the Indian consumer market amongst stiff competition from e-commerce markets.The transaction will occur in two phases. 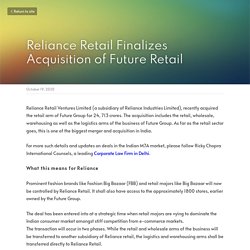 Corporate Law Firm in Gurgaon. Insolvency Proceedings against Personal Guarantors: Important Question of Law Before the Supreme Court. Mergers and Acquisitions Case Studies. Introduction Mergers & Acquisitions (“M&A”) is a strategy through which two or more business entities enter into a series of financial transaction through which amalgamation or takeover of the relevant entities takes place for various purposes. 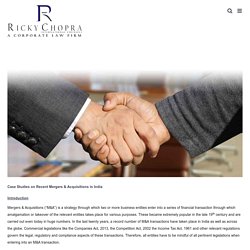 These became extremely popular in the late 19th century and are carried out even today in huge numbers. In the last twenty years, a record number of M&A transactions have taken place in India as well as across the globe. Commercial legislations like the Companies Act, 2013, the Competition Act, 2002 the Income Tax Act, 1961 and other relevant regulations govern the legal, regulatory and compliance aspects of these transactions. Therefore, all entities have to be mindful of all pertinent legislations when entering into an M&A transaction. M&A transactions may seem simple prima facie, however, they can often have a very complex side.

Vodafone-Idea Merger. Corporate Law Firm in Gurgaon. On September 17, 2020, the Supreme Court refused to vacate the stay granted by the Delhi High Court on proceedings against Mr. 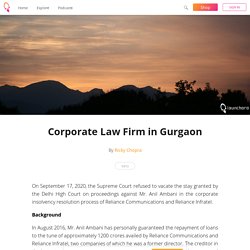 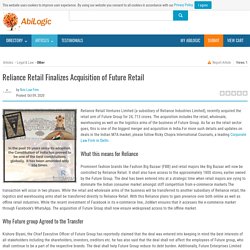 The acquisition includes the retail, wholesale, warehousing as well as the logistics arms of the business of Future Group. As far as the retail sector goes, this is one of the biggest merger and acquisition in India.For more such details and updates on deals in the Indian M7A market, please follow Ricky Chopra International Counsels, a leading Corporate Law Firm in Delhi. What this means for Reliance Prominent fashion brands like Fashion Big Bazaar (FBB) and retail majors like Big Bazaar will now be controlled by Reliance Retail.

It shall also have access to the approximately 1800 stores, earlier owned by the Future Group. Status of Asset Reconstruction Companies as Resolution Applicants. A Detailed Guide For Anti-Dumping Laws in India. U.S. Court Finds 2 Chinese Nationals Guilty of Massive Cyber Crime. The Department of Justice (DoJ) of the United States convicted 2 Chinese hackers on July 7, 2020. 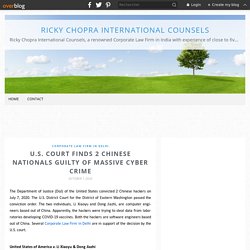 The U.S. District Court for the District of Eastern Washington passed the conviction order. The two individuals, Li Xiaoyu and Dong Jiazhi, are computer engineers based out of China. Apparently, the hackers were trying to steal data from laboratories developing COVID-19 vaccines. Step-By-Step Guide on How to Shift Manufacturing to India.

Corporate Law Firms in Gurgaon. Corporate Law Firms in India. Section 2 (1)(i)(viii)(zb) of the Trademarks Act, 1999 defines “trade mark” as “a mark capable of being represented graphically and which is capable of distinguishing the goods or services of one person from those of others and may include shape of goods, their packaging and combination of colours”. 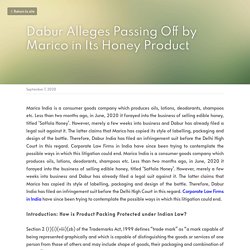 A product manufacturer may get its label, design and product styles registered either under the Trademark Act, 199 or the Copyright Act, 1957. However, registration of the mark is not the sine qua non for protection. Nonetheless, even if such label is not registered, the manufacturer may still bring a suit for passing off. This is because Section 134 (c) of the Trademarks Act, 1999 uses the phrase, “suit for passing off for use by the defendant of any trade mark which is identical with or deceptively similar to the plaintiff’s trade mark, whether registered or unregistered”. In Alkem Laboratories Limited v. 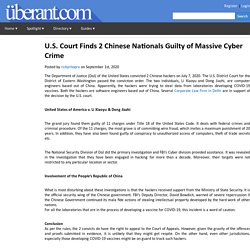 The U.S. District Court for the District of Eastern Washington passed the conviction order. The two individuals, Li Xiaoyu and Dong Jiazhi, are computer engineers based out of China. Apparently, the hackers were trying to steal data from laboratories developing COVID-19 vaccines. United States of America v. Best Corporate Law Firms in India. Having a committed team of approximately 20 lawyers, this firm is arguably one of the best corporate law firms in India and the positive client feedbacks are only a testament to this fact. 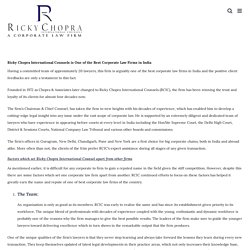 Founded in 1972 as Chopra & Associates later changed to Ricky Chopra International Counsels (RCIC), the firm has been winning the trust and loyalty of its clients for almost four decades now. The firm’s Chairman & Chief Counsel, has taken the firm to new heights with his decades of experience, which has enabled him to develop a cutting-edge legal insight into any issue under the vast scope of corporate law.

He is supported by an extremely diligent and dedicated team of lawyers who have experience in appearing before courts at every level in India including the Hon’ble Supreme Court, the Delhi High Court, District & Sessions Courts, National Company Law Tribunal and various other boards and commissions. Factors which set Ricky Chopra International Counsel apart from other firms. Mergers And Acquisitions In India. By Author: Ricky Chopra International CounselsTotal Articles: 1Comment this article There are various factors which could drive an M&A transaction. 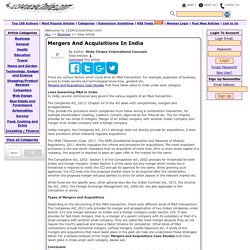 For example, expansion of business, access to trade secrets and technological know-how, goodwill etc. Mergers and Acquisitions in India. How to Set Up a Business in India. Business establishments form the backbone of any economy and are often a significant indication of the health of the economy. That is why administrators and governance officials are always keen on introducing policy measures favourable for establishing new businesses. Start-Up India and Make in India are two such campaigns started by the Indian government, which have witnessed significant stimulation for new business. While establishing a new business gives one substantial autonomy and freedom, it also entails several compliance obligations.

These have been discussed below. Corporate Law Firms in Delhi. SC Issues Notice to BCI in a Petition seeking Permission for Lawyers to Advertise. On 14 July 2020, the Supreme Court issued notice to the Bar Council of India seeking its reply to a public interest litigation filed by a member of the NGO,Nitya Law Society. Th PIL has sought directions to the BCI to permit lawyers to advertise and take up alternate work during the coronavirus pandemic and the subsequent lockdown. As per the current law in force, it amounts to "professional misconduct" if a lawyer tries to solicit clients through advertisements or takes up full-time employment elsewhere. According to the petition the lawyers in the lower to middle income bracket have been adversely affected due to this and therefore demands a relief for them by way of a notification.