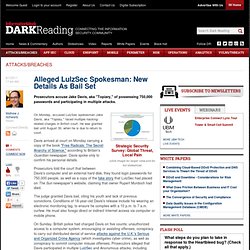 Strategic Security Survey: Global Threat, Local Pain (click image for larger view and for full slideshow) On Monday, accused LulzSec spokesman Jake Davis, aka "Topiary," faced multiple hacking-related charges in British court. He was granted bail until August 30, when he is due to return to court. Davis arrived at court on Monday carrying a copy of the book "Free Radicals: The Secret Anarchy of Science," according to Britain's Guardian newspaper. Prosecutors told the court that between Davis's computer and an external hard disk, they found login passwords for 750,000 people, as well as a copy of the fake story that LulzSec had placed on The Sun newspaper's website, claiming that owner Rupert Murdoch had died.

The judge granted Davis bail, citing his youth and lack of previous convictions. More details also emerged about Davis's arrest on Wednesday. Alleged LulzSec heavy in parole custody of his mom. *This is pathetic. 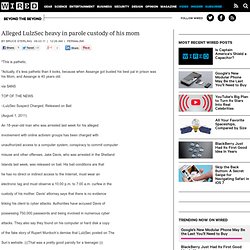 *Actually, it’s less pathetic than it looks, because when Assange got busted his best pal in prison was his Mom, and Assange is 40 years old. via SANS TOP OF THE NEWS –LulzSec Suspect Charged, Released on Bail (August 1, 2011) An 18-year-old man who was arrested last week for his alleged involvement with online activism groups has been charged with unauthorized access to a computer system, conspiracy to commit computer misuse and other offenses. Jake Davis, who was arrested in the Shetland Islands last week, was released on bail. His bail conditions are that he has no direct or indirect access to the Internet, must wear an electronic tag and must observe a 10:00 p.m. to 7:00 a.m. curfew in the custody of his mother. Anonymous Rocked By News That Top Hacker Snitched to Feds.

On the heels of 25 arrests of Spanish-speaking anons last week, Anonymous was rocked Tuesday by the news that Hector Xavier Monsegur, the legal name of prominent antisec known as Sabu, has been cooperating with the FBI to hunt down other anon hackers from Lulzsec and Antisec. 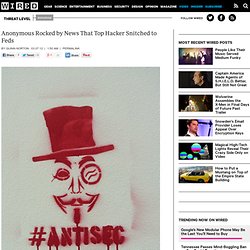 The chatter on the anon IRC servers and anon-associated Twitter accounts ranged Tuesday from denial about Sabu’s involvement to outrage and hatred for Monsegur. One who worked with Sabu as part of Antisec, the miltant and pranksterish arm of Anonymous, described themselves as “emotionally devastated” and “shocked” by the news. “Sabu was in my opinion a great guy. I was woken up today with the message that the arrests happened. It came to me like an emotional bitchslap,” said the anon in an online chat. ”I know why I got kicked out of antisec now,” the anon continued, intimating that Sabu did so to protect him/her from prosecution. As for the long run, many anons don’t believe the effects will be profound. LulzSec Leader Was Snitch Who Helped Snag Fellow Hackers. A top LulzSec leader turned informant last year after he was secretly arrested, providing information to law enforcement that led to the arrests Tuesday of other top members of the hacking group, including one alleged to be deeply involved in December’s Stratfor hack, federal authorities said Tuesday. 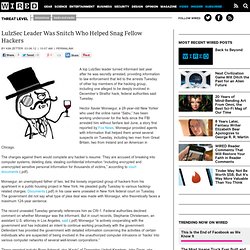 Hector Xavier Monsegur, a 28-year-old New Yorker who used the online name “Sabu,” has been working undercover for the feds since the FBI arrested him without fanfare last June, a story first reported by Fox News. Monsegur provided agents with information that helped them arrest several suspects on Tuesday, including two men from Great Britain, two from Ireland and an American in Chicago. The charges against them would complete any hacker’s resume. Anonymous Eavesdrops on FBI Anti-Anonymous Strategy Meeting.

As FBI and Scotland Yard investigators recently plotted out a strategy for tracking suspects linked to Anonymous, little did they know that members of the group were eavesdropping on their conference call and recording their plans. 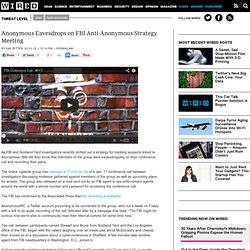 The online vigilante group has released a 17-minute clip of a Jan. 17 conference call between investigators discussing evidence gathered against members of the group as well as upcoming plans for arrests. The group also released an e-mail sent out by an FBI agent to law enforcement agents around the world with a phone number and password for accessing the conference call. The FBI has confirmed to the Associated Press that the recording is authentic. In Flawed, Epic Anonymous Book, the Abyss Gazes Back. And that’s how Parmy Olson gets around the problems of writing about Anonymous — by not actually writing much about Anonymous. 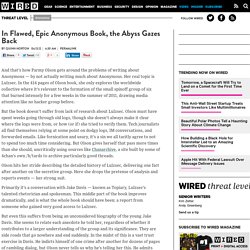 Her real topic is Lulzsec. In the 414 pages of Olson book, she only explores the worldwide collective where it’s relevant to the formation of the small spinoff group of six that burned intensely for a few weeks in the summer of 2011, drawing media attention like no hacker group before. But the book doesn’t suffer from lack of research about Lulzsec. Olson must have spent weeks going through old logs, though she doesn’t always make it clear where the logs were from, or how (or if) she tried to verify them.

LulzSec hacker vows to fight American extradition. A British citizen accused of hacking a number of Hollywood websites has vowed to challenge any possible extradition to the United States. 20-year-old Ryan Cleary - who stands accused of targeting PBS, Sony Pictures and Fox - was indicted yesterday by a US federal grand jury in Los Angeles on multiple counts of computer-related crimes. 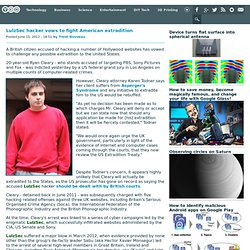 However, Cleary attorney Karen Todner says her client suffers from Asperger's Syndrome and any initiative to extradite him to the US would be rebuffed. "As yet no decision has been made as to which charges Mr. Cleary will deny or accept but we can state now that should any application be made for [his] extradition then it will be fiercely contested," Todner stated. "We would once again urge the UK government, particularly in light of the evidence of internet and computer cases coming through the courts, that they now review the US Extradition Treaty. " LulzSec 'hacker' Ryan Cleary unlikely to be extradited to US because he has Asperger's syndrome. The case is likely to add further weight to the case of Gary McKinnon who is currently challenging a US bid to extradite him on charges of hacking into highly sensitive military computers eight years ago. 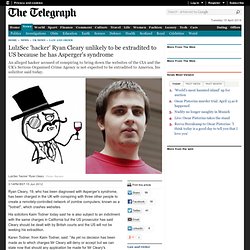 Mr McKinnon, who suffers from autism, admits hacking but claims he was looking for evidence of UFOs. His mother, Janis Sharp, claims that Mr McKinnon would commit suicide if the extradition went ahead. But a recent psychological report suggested Mr McKinnon would be unlikely to take his own life if tried in America. Home Secretary, Theresa May is currently considering his case which is due back before the High Court in July. LulzSec members plead guilty to DDoS attacks on Sony, CIA, others - Cybercrime and Hacking, Government/Industries, government, security, sony, pirate bay, LulzSec, Intel, Bloomberg. News. Thedrum.co. LulzSec duo plead guilty to high-profile attacks - Security. June 25, 2012 Two members of the computer hacking group LulzSec pleaded guilty to launching distributed denial-of-service (DDoS) attacks against the Serious Organised Crime Agency (SOCA) in the United Kingdom and the Central Intelligence Agency (CIA) in the United States. 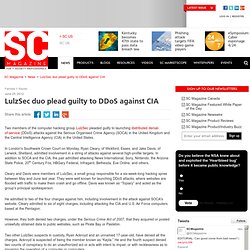 Lulzsec: UK men plead guilty to hacking charges. 25 June 2012Last updated at 13:52 GMT Lulzsec were known for carrying out attacks for the "lulz", a variation of "lol", meaning "laugh out loud" Two members of the computer hacking group Lulzsec have pleaded guilty to charges they attacked several high-profile websites. 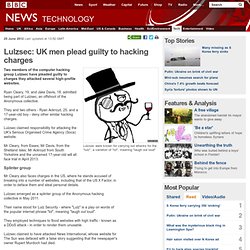 Ryan Cleary, 19, and Jake Davis, 18, admitted being part of Lulzsec, an offshoot of the Anonymous collective. They and two others - Ryan Ackroyd, 25, and a 17-year-old boy - deny other similar hacking charges. Lulzsec claimed responsibility for attacking the UK's Serious Organised Crime Agency (Soca) website. Mr Cleary, from Essex; Mr Davis, from the Shetland Isles; Mr Ackroyd from South Yorkshire and the unnamed 17-year-old will all face trial in April 2013.

LulzSec 'hacktivists' admit to attacking internet sites - Crime - UK. 6 men alleged to be LulzSec hackers - Darren Martyn, alleged to be 'Pwnsauce' Two Irish arrested in LulzSec case. Read More: hacking Two Irish men were among five arrested as part of investigations into the LulzSec hacking team today. Police in Ireland, the US and UK have taken a total of five men into custody on the foot of information supplied by LulzSec’s alleged ringleader Hector Xavier Monsegur (28), aka Sabu, who was arrested last June. According to Fox News Darren "Pwnsauce" Martyn and Donncha "Palladium" O’Cearrbhail have been taken into custody. Offaly County Councillor's Son Accused of Hacking - Donncha O'Cearrbhail.