Tatts, ‘Toons and Trees: An Interview With Li-D For Razor Blades and Lemonade. This month, Razor Blades N Lemonade is teaming up with local Bay Area visual artist Li-D (La’darius Whitfield), talking about his take on the RBNL philosophy of turning past challenges into inspirational creative expression. 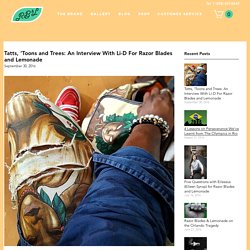 We sat down to chat with Li-D about growing up in Baton Rouge, his unique art, and how he’s weaved his life experiences into his artistic process. "At what age did you realize that you had a thing for art? " I’ve been drawing for as long as I can remember. Even in kindergarten when they’d ask “What do you want to be when you grow up?” , my answer was always that I wanted to be an artist. "Who are the artists that you look up to and learn from? " I look up to anybody who’s following their dreams - people like that inspire me to keep going. But if I had to name someone in particular it would be my big bro/mentor Tai Henderson (aka @thaviper). "You mention that you grew up in Baton Rouge, Louisiana. "What do you see when creating art? Razor Blades N Lemonade - Balancing Your Life Through Positivity. The Summer Olympic Games, held in Rio de Janeiro Brazil in 2016, are a cause for celebration and excitement. 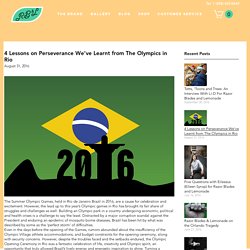 However, the lead up to this year’s Olympic games in Rio has brought its fair share of struggles and challenges as well. Building an Olympic park in a country undergoing economic, political and health crises is a challenge to say the least. Distracted by a major corruption scandal against the President and enduring an epidemic of mosquito borne diseases, Brazil has been hit by what was described by some as the ‘perfect storm’ of difficulties.

Even in the days before the opening of the Games, rumors abounded about the insufficiency of the Olympic Village athlete accommodations, and budget constraints for the opening ceremony, along with security concerns. Just Because You Don’t Get Gold, Doesn’t Mean You Didn’t Win For some athletes, training to get to the Olympic Games is the greatest challenge they have faced. 2. 3. Five Questions with Eileezus (Eileen Syrop) for Razor Blades and Lemonade. Razor Blades N Lemonade - Balancing Your Life Through Positivity. In recent news: I'm sure you heard of the shooting massacre at Pulse Nightclub in Orlando, Florida. 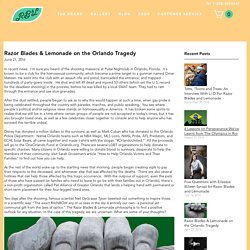 It's known to be a club for the homosexual community, which became a prime target to a gunman named Omar Mateen. He went into the club with an assault rifle and pistol, barricaded the entrance, and trapped hundreds of party-goers inside. He shot and left 49 dead and injured 53 others (which set the U.S. record for the deadliest shooting) in the process, before he was killed by a local SWAT team. They had to ram through the entrance and use stun grenades. After the dust settled, people began to ask as to why this would happen at such a time, when gay pride is being celebrated throughout the country with parades, marches, and public speaking. Disney has donated a million dollars to the survivors; as well as Mark Cuban who has donated to the Orlando Police Department.

Razor Blades N Lemonade - Balancing Your Life Through Positivity. Alia Zin is an up & coming Los Angeles based female rap artist in the roster of Pakkmusicgroup.. 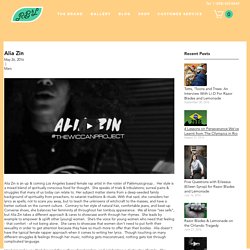 Her style is a mixed blend of spiritually conscious food for thought. She speaks of trials & tribulations; surreal pains & struggles that many of us today can relate to. Her subject matter stems from a deep-seeded family background of spirituality from preachers, to satanist traditions & rituals. With that said, she considers her lyrics as spells; not to scare you away, but to teach the unknowns of witchcraft to the masses, and have a better outlook on the current culture. Razor Blades N Lemonade - Balancing Your Life Through Positivity. Devin Lars is CEO/Cofounder of a clothing line called "Doing Everything Different. 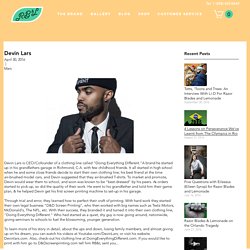 "A brand he started up in his grandfathers garage in Richmond, C.A. with few childhood friends. It all started in high school when he and some close friends decide to start their own clothing line; his best friend at the time air-brushed model cars, and Devin suggested that they air-brushed T-shirts. To market and promote, Devin would wear them to school, and soon was known to be "best-dressed" by his peers. As orders started to pick-up, so did the quality of their work. Razor Blades N Lemonade - Balancing Your Life Through Positivity. QueenzFlipz (Trevor Robinson) is well-known for his car antics with unsuspecting passengers, blind-dates, and even his own son. 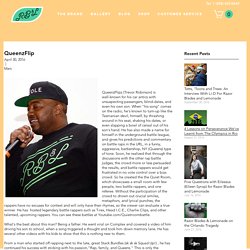 When "his song" comes on the radio, he's known to turn-up like the Tasmanian devil, himself, by thrashing around in his seat, shaking his dates, or even slapping a bowl of cereal out of his son's hand. He has also made a name for himself in the underground battle league, and gives his predictions and commentary on battle raps in the URL, in a funny, aggressive, barbershop, NY (Queens) type of tone. Soon, he realized that through the discussions with the other rap battle judges, the crowd more or less persuaded the results, and battle rappers would get frustrated in no vote control over a bias crowd.

So he created the the Quiet Room, which showcases a small room with few people, two battle rappers, and one referee. What's the best about this man? Razor Blades N Lemonade - Balancing Your Life Through Positivity. A well-known, key figure fighter who started the foundation of the fighting game community. 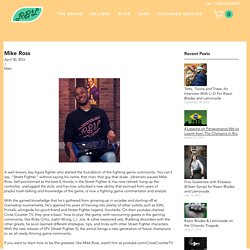 You can't say, "Street Fighter," without saying his name; that man; that guy that dude... (dramatic pause) Mike Ross. Self-proclaimed as the best E.Honda in the Street Fighter 4, has now retired, hung up the controller, unplugged the stick, and has now unlocked a new ability that evolved from years of playful trash-talking and knowledge of the game, is now a fighting game commentator and analyst. Razor Blades N Lemonade - Balancing Your Life Through Positivity.