Self-determination theory. In the 1970s, research on SDT evolved from studies comparing the intrinsic and extrinsic motives, and from growing understanding of the dominant role intrinsic motivation played in an individual’s behavior[2] but it was not until mid-1980s that SDT was formally introduced and accepted as a sound empirical theory. 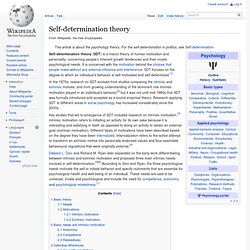 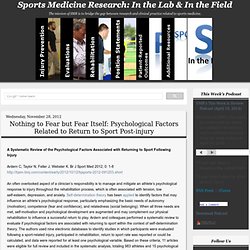 Br J Sport Med 2012; 0: 1-8 An often overlooked aspect of a clinician’s responsibility is to manage and mitigate an athlete’s psychological response to injury throughout the rehabilitation process, which is often associated with tension, low self-esteem, depression, and anxiety. Self-determination theory has been applied to identify factors that may influence an athlete’s psychological response, particularly emphasizing the basic needs of autonomy (motivation), competence (fear and confidence), and relatedness (social belonging). 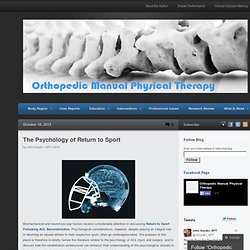 Psychological considerations, however, despite playing an integral role in returning an injured athlete to their respective sport, often go underappreciated. The purpose of this piece is therefore to briefly review the literature related to the psychology of ACL injury and surgery, and to discuss how the rehabilitation professional can enhance their understanding of the psychological domain to foster improved outcomes in working with this population of athletes. Once a patient has successfully met all return to sport criteria, the next step naturally involves returning to sport. While some patients seamlessly return to their pre-injury status, others struggle with simply returning to their sport.

According to a recent systematic review conducted by Te Wierike et al.