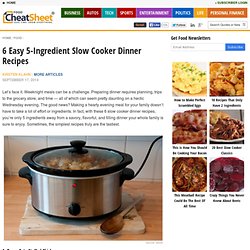 Weeknight meals can be a challenge. Crockpot 101. The crockpot or slow cooker is one of the best time saving appliances in the kitchen. 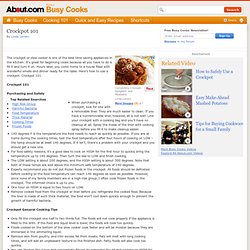 It's great for beginning cooks because all you have to do is fill it and turn it on. Hours later, you come home to a house filled with wonderful smells and dinner ready for the table. Slow Cooker Chicken Chili Recipe : Food Network Kitchens. Calories in Buffalo Chicken Chili. No matter what team they're rooting for on Super Bowl Sunday, EVERYONE will agree that this Buffalo-wing-inspired chili is a real winner. 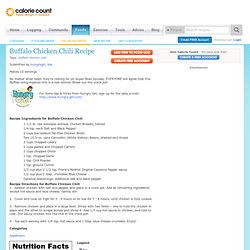 Break out the crock pot! Recipe Ingredients for Buffalo Chicken Chili Recipe Directions for Buffalo Chicken Chili Season chicken with salt and pepper, and place in a crock pot. Add all remaining ingredients except hot sauce and blue cheese. Slow Cooker Chicken and Vegetable Soup Recipe : Food Network Kitchens. Slow Cooker Woodchuck Hard Cider Pulled BBQ Chicken Sandwiches with Roasted Balsamic Onions and Peppers. What a busy few days it's been around here.The weather has been great (with the exception of today... rain!) 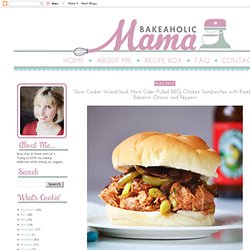 So I finally finished getting the garden in. Looking forward to fresh tomatoes, cukes, peas, jalapenos.... and a ton of various other things. I'm also looking forward to our wild berries! We have raspberries, blackberries, blueberries, strawberries all growing in the wild here and I am usually able to pick enough to sustain our fruit in our daily diets, make cakes, pies, and even freeze some for later in the season!

Saves me a penny or two during the summer. With summer right around the corner BBQ is definitely something we have been craving and eating allot of lately. Hubs loves a messy sweet and spicy pulled pork sandwich... but this girl isn't exactly doing back flips over them. Slow cooker fall apart chicken. If you haven’t noticed, the amount of meat in our freezer is getting a little bit out of control. 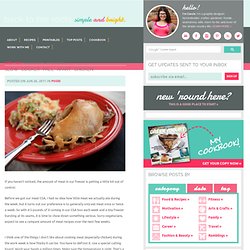 Before we got our meat CSA, I had no idea how little meat we actually ate during the week, but it turns out our preference is to generally only eat meat once or twice a week. So with 4-5 pounds of it coming in our CSA box each week and a tiny freezer bursting at its seams, it is time to chow down something serious. Sorry vegetarians, expect to see a rampant amount of meat recipes over the next few weeks. I think one of the things I don’t like about cooking meat (especially chicken) during the work week is how finicky it can be. You have to defrost it. One Pot Meals: Chickpea Curry" Now that my son Hugh is a full time cheesemonger, he doesn't get to spend much time at our cottage during the summer. 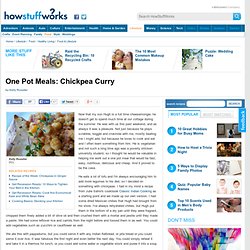 He was with us this past weekend, and as always it was a pleasure. Not just because he plays scrabble, boggle and crokinole with me, mostly beating me I might add, but because he loves to cook and eat and I often learn something from him. He is vegetarian and not such a long time ago was a poverty stricken university student, so I thought he would be valuable in helping me work out a one pot meal that would be fast, easy, nutritious, delicious and cheap. 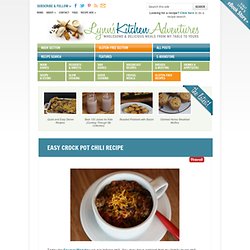 You may have noticed that my family loves chili and I have quite a few versions on my site, but this recipe today is one of my favorites. I have been making this chili for close to fifteen years and it is the chili I make the most. This recipe came from a Taste of Home magazine from the the 1990′s. I still love and use so many of those old Taste Of Home recipes and this is one of my favorites. Pumpkin Black Bean Chicken Chili in the Slow Cooker. Fall is my favorite season. 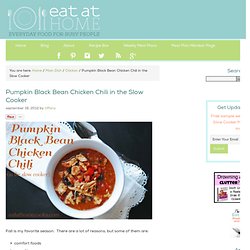 There are a lot of reasons, but some of them are: comfort foodspumpkinapplescool weather that makes me want to turn on the oven…soup, soup, soup! I’ve shared my love of Autumn foods and soups before. This recipe, which came from a friend of mine {hi, Bev!} Fits into both of those categories. I’d never had pumpkin in a savory dish before and I wasn’t too sure what it would be like. For the record, I did keep the pumpkin part a secret from the kids until after dinner. Slow Cooker Butternut Squash Coconut Chili. On Sunday, my family and I got together at my parents’ place to watch the 100th Grey Cup game. 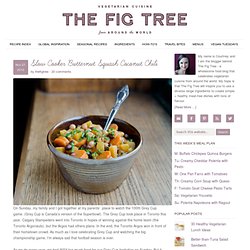 (Grey Cup is Canada’s version of the Superbowl). The Grey Cup took place in Toronto this year. Calgary Stampeders went into Toronto in hopes of winning against the home team (the Toronto Argonauts), but the Argos had others plans. In the end, the Toronto Argos won in front of their hometown crowd. As much as I love celebrating Grey Cup and watching the big championship game, I’m always sad that football season is over. As we do every year, we had WAY too much food for our Grey Cup festivities on Sunday. After our appetizer overload during the game, we sat down for some homemade chili.

Crockpot Three Bean Chili Recipes. Use your favorite combination of beans in this super easy five (or six!) 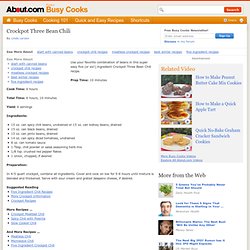 Ingredient Crockpot Three Bean Chili recipe. Prep Time: 10 minutes Cook Time: 6 hours Total Time: 6 hours, 10 minutes Yield: 6 servings Ingredients: 15 oz. can spicy chili beans, undrained or 15 oz. can kidney beans, drained15 oz. can black beans, drained15 oz. can pinto beans, drained14 oz. can spicy diced tomatoes, undrained8 oz. can tomato sauce1 Tbsp. chili powder or salsa seasoning herb mix1/8 tsp. crushed red pepper flakes1 onion, chopped, if desired. Slow-Cooker Recipe: Curried Vegetable and Chickpea Stew Recipes from The Kitchn. Since this makes such a large batch, you can freeze what you don't think you'll eat in a week. Just freeze it before adding the coconut milk since this has a tendency to separate once frozen. This recipe is also easily replicated in a dutch oven, if you'd prefer that route. Pre-heat your oven to 350°F and do all the steps in your dutch oven.

Cover and cook for two hours or until the vegetables are tender. Tester's Notes This is always one of the first recipes I make once the weather gets colder. Curried Vegetable and Chickpea Stew. Slow Cooker Cuban Braised Beef and Peppers Recipe. Slow-Cooked Boeuf Bourguignon Recipes from The Kitchn. Boeuf bourguignon is so much more than just another beef stew. This classic French dish, made so popular by a certain Ms. Julia Child, is the kind of stew that can earn marriage proposals. The aroma alone — that deeply savory aroma of onions, slow-cooked beef, and red wine — is enough to make your eyes roll skyward and your knees go weak. Make boeuf bourguignon once and you'll wonder why anyone ever bothers making anything else. Boeuf bourguignon is all about building flavor; layer upon layer upon layer of delicious flavor. Slow-Cooker Lamb, Apricot, and Olive Tagine. Slowcooker cabbage lentil vegetable soup Recipe by CONNIE48036.

Mediterranean Roast Turkey Recipe. Black Bean Tostadas with Slow-Cooker Cheddar-Beer Chicken (or Not) Tostadas, a Mexican dish that consists of a crisp corn tortillas layered with refried beans and all kinds of other good things, lend themselves well to a variety of palates. Diners can assemble their own, adding what they want, leaving off what they don’t. So, naturally, they’re perfect for the mixed veggie/carnie house. In this version, the meat-eater gets a healthy dose of spicy, tender shredded chicken slow-cooked in beer; the vegetarian still gets plenty to eat, including delicious, smoky homemade refried black beans.

Win all around. Be sure to bake your tortillas long enough so that they’re nice and crisp, or you might be watching your diners struggle to bite too-chewy tortillas. Tip: If you, like me, hate to see half a beer wasted with recipes like this – and you’re not really loving the idea of drinking the remainder as you’re assembling a Crock Pot recipe at 8 a.m. – add the rest to a freezer bag along with the spices, garlic, and onions. Slow Cooker Seafood Chowder recipe. Crockpot Ready Meals! Healthy Eat Clean Meal Options. For all of the super busy moms and ladies out there, I know that TIME is a major factor!! But don't let that deter you from eating healthy! How amazing would life be if you could just dump something in the crock pot n the A.M. and return to an amazing smelling house later!?