Indicted Detroit Police Officers Allegedly Used Authority To Steal And Sell Drugs. Two Detroit police officers used their authority as law enforcement to arrange drug deals, orchestrate traffic stops, effect false arrests and coerce and extort victims, all in order to steal money and drugs that were then sold for profit, according to a Wednesday federal indictment that was unsealed Thursday. 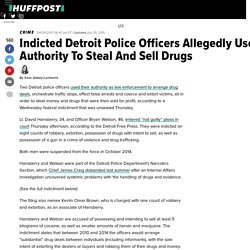 Lt. David Hansberry, 34, and Officer Bryan Watson, 46, entered “not guilty” pleas in court Thursday afternoon, according to the Detroit Free Press. They were indicted on eight counts of robbery, extortion, possession of drugs with intent to sell, as well as possession of a gun in a crime of violence and drug trafficking. Both men were suspended from the force in October 2014. Hansberry and Watson were part of the Detroit Police Department’s Narcotics Section, which Chief James Craig disbanded last summer after an Internal Affairs investigation uncovered systemic problems with the handling of drugs and evidence.

(See the full indictment below) In a statement from the U.S. Crippling bacterial infection sweeps Flint, Michigan. Authorities in the financially struggling city of Flint, Michigan, switched its water source from Detroit's system to the Flint River to save money in April 2014. 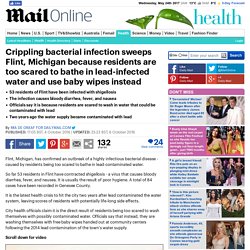 The river water was more corrosive than the Detroit system's and caused more lead to leach from Flint's aging pipes. Lead can be toxic and children are especially vulnerable. Some 8,000 children are believed to have been exposed to lead poisoning since April 2014. And there has been an uptick in cases of Legionnaire's disease. Demonstrators demand action from the GOP presidential candidates about the water crisis in Flint before the GOP presidential debate on March 3, 2016 in Detroit, Michigan Criminal charges coming over Flint water Loaded: 0% Progress: 0% Police Radio Codes. New guilty plea by supplier in Detroit school fraud scandal. Another supplier to the Detroit Public Schools has pleaded guilty to defrauding the school district. 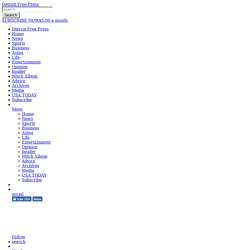 Pleading guilty Tuesday in federal court in Detroit was Theodore Pride III, who stole “at least $684,644” by submitting fraudulent invoices to the district “for tutorial services that were never rendered to DPS students,” said a news release from the office of U.S. Attorney Barbara McQuade. "People who defraud a school system are effectively stealing educational opportunities from children,” McQuade said. Pride’s case is the latest in a string of more than a dozen cases this year in which a DPS vendor and school officials pleaded guilty to stealing from the district with kickbacks and phony invoices. In testimony on Dec. 6 in Lansing, DPS Transition Manager Steven Rhodes — formerly, the judge in the historic city of Detroit’s bankruptcy — told state lawmakers that the district’s criminal investigation wasn’t over. ►Related:DPS principal found guilty on all counts Read or Share this story: Detroit haunted by poverty, scandal.

DETROIT | When Charley Ballard tells the story of Detroit’s myriad woes, he starts with 8 Mile Road. 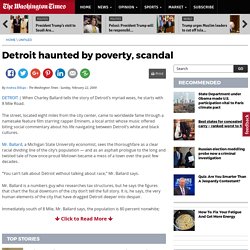 The street, located eight miles from the city center, came to worldwide fame through a namesake feature film starring rapper Eminem, a local artist whose music offered biting social commentary about his life navigating between Detroit’s white and black cultures. Mr. Ballard, a Michigan State University economist, sees the thoroughfare as a clear racial dividing line of the city’s population — and as an asphalt prologue to the long and twisted tale of how once-proud Motown became a mess of a town over the past few decades. “You can’t talk about Detroit without talking about race,” Mr. Ballard says. Mr. Immediately south of 8 Mile, Mr. In the 1970s, when Coleman Young, the city’s first black mayor, took office in the wake of civil rights strife, many whites fled to the suburbs, polarizing the area and seeding bitterness that remains palpable to this day.

Detroit Historical Society: Frontiers to Factories: Curriculum. By 1900, Campus Martius had grown to include many of the city's tallest buildings as well as streetcar lines. 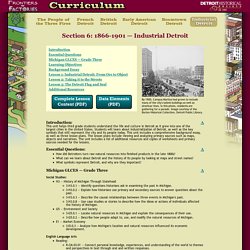 In this photo, residents are gathering for a parade. Image courtesy of the Burton Historical Collection, Detroit Public Library. Introduction: This unit helps third grade students understand the life and culture in Detroit as it grew into one of the largest cities in the United States. Students will learn about industrialization of Detroit, as well as the key symbols that still represent the city and its people today. This unit includes a comprehensive background essay, as well as three lesson plans. How did Detroiters turn raw natural resources into finished products in the late 1800s? Michigan GLCES — Grade Three Social Studies: English Language Arts Reading: R.CM.03.01 — Connect personal knowledge, experiences, and understanding of the world to themes and perspectives in text through oral and written responses. Students will: Detroit's economy was booming.