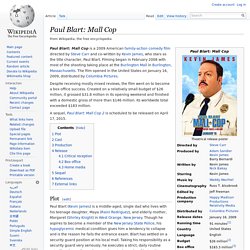 Created on a relatively small budget of $26 million, it grossed $31.8 million in its opening weekend and finished with a domestic gross of more than $146 million. Its worldwide total exceeded $183 million. A sequel, Paul Blart: Mall Cop 2 is scheduled to be released on April 17, 2015. Plot[edit] National Security (2003) Men in Black 3. Men in Black 3 received generally positive reviews from critics[6] and became a box-office success with a worldwide gross of over $624 million.[4] Before adjusting for inflation, it is also the highest grossing film in the series.[7][8] Plot[edit] Boris the Animal, last of the malevolent Boglodites that consumed all planets in their path, escapes from a lunar prison seeking vengeance on Men in Black Agent K, who shot off his left arm and jailed him in 1969. 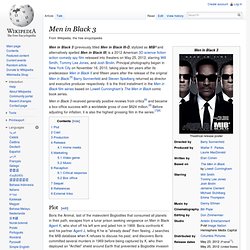 Boris confronts K and his partner Agent J, telling K he is "already dead" then fleeing. J searches the MIB database when K refuses to discuss his past, and discovers Boris committed several murders in 1969 before being captured by K, who then deployed an "ArcNet" shield around Earth that prevented a Boglodite invasion and starved the race to extinction.

Agent O, the new head of MIB after Agent Zed's passing, tells J not to probe deeper. Men in Black II. Plot[edit] While J prepares to deneuralyze Brown, Serleena takes over MIB HQ, which locks down, causing the deneuralyzer to go into a standby mode and flushes them out on Times Square. 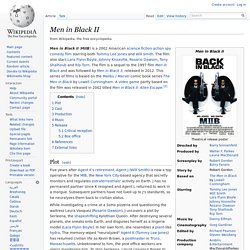 After J searches for the deneuralyzer on the internet, he takes Brown to Jack Jeebs (Tony Shalhoub), who owns an illegal deneuralyzer. Although K eventually starts to regain some memories, he cannot recall the "Light of Zartha. " K neuralyzed himself in order to keep the information from himself and left the clues for himself. Men in Black (1997) Let's Be Cops. Let's Be Cops is a 2014 American buddy cop comedy film directed by Luke Greenfield and co-written with Nicholas Thomas. 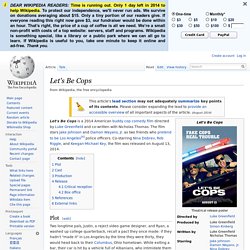 The film stars Jake Johnson and Damon Wayans, Jr. as two friends who pretend to be Los Angeles[4] police officers. Co-starring Nina Dobrev, Rob Riggle, and Keegan-Michael Key, the film was released on August 13, 2014. Plot[edit] Rush Hour 3. In her first appearance in an American film, Noémie Lenoir portrays Geneviève, a beautiful stage performer who is one of the main suspects in the case as well as Carter's love interest. 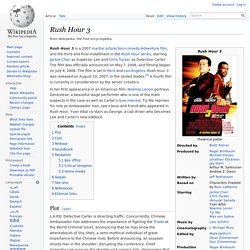 Tzi Ma reprises his role as Ambassador Han, Lee's boss and friend who appeared in Rush Hour. Yvan Attal co-stars as George, a cab driver who becomes Lee and Carter's new sidekick. Plot[edit] Lee learns that Han will make a full recovery in the hospital. Rush Hour 2. Rush Hour 2 was released August 3, 2001 to mixed reviews from critics, but it grossed $347,325,802 at the worldwide box office,[2] becoming the eleventh highest-grossing film of 2001 worldwide. 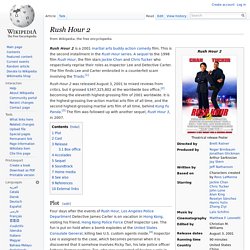 It is the highest-grossing live-action martial arts film of all time, and the second highest-grossing martial arts film of all time, behind Kung Fu Panda.[3] The film was followed up with another sequel, Rush Hour 3, in 2007. Plot[edit] The United States Secret Service, led by Agent Sterling, and the Hong Kong Police Force soon get into a fight over the jurisdiction of the case. Lee and Carter separately make their way to Tan's yacht where he is holding a dinner party. Tan scolds his underling, Hu Li, who then leaves as Lee and Carter confront Ricky Tan. 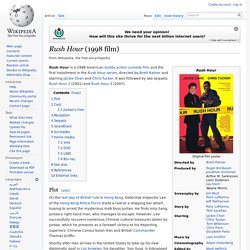 He finds only Sang, Juntao's right hand man, who manages to escape. However, Lee successfully recovers numerous Chinese cultural treasures stolen by Juntao, which he presents as a farewell victory to his departing superiors: Chinese Consul Solon Han and British Commander Thomas Griffin.