Get Your Hands On The Best Elder Scrolls Online Guide. Elder Scrolls Online Guides, Tips, Tricks And Info For 2017 Leveling Guides | Build Guides | Crafting Guides | Gold Guides ESO Guide (Leveling & Progression 2016 Facts & Tips) The most effective way of earning XP is by doing quests.You will also earn a significant amount of XP by finding and exploring new areas.Skyshards are collectibles scattered all over the map. 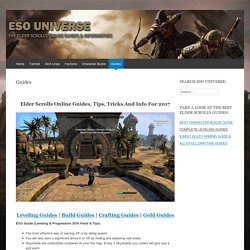 Every 3 Skyshards you collect will give you a skill point.Mundus Stones are scattered all over the map. They grant the player permanent buffs, but only one can be active at a time. If you’re looking for more of a streamlined, step-by-step walkthrough that will allow you to level in the fastest possible time and still experience the game content, sign up over at ESO Mastery Guides. 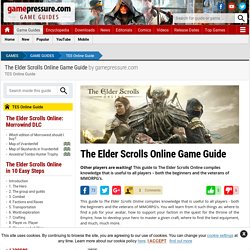 You will learn from it such things as: where to find a job for your avatar, how to support your faction in the quest for the throne of the Empire, how to develop your hero to master a given craft, where to find the best equipment, and much, much more. The guide details on following aspects: Basic issues, such as system requirements for PC version or pricing model used in the game;The game world - the characteristics of the in-game lands and locations, such as locales, skyshards, dungeons etc.

;Three main factions along with playable races ascribed to them;Character creation and development system;Crafting - gathering ingredients, creating items, etc. ;Close and long ranged combat and magic mechanics;Sneak, lockpick, persuade, trade, and other mechanics of the type;Player versus Player game modes, battle for Cyrodiil being the first and foremost. The Elder Scrolls Online. The Elder Scrolls Online, also known as The Elder Scrolls Online: Tamriel Unlimited, and commonly abbreviated as ESO, is a massively multiplayer online role-playing game (MMORPG) that was announced in May 2012 and was released for PC and Mac on April 4th, 2014.[1] It is the eighth game in The Elder Scrolls series. 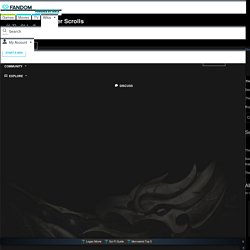 On June 9th, 2015, the game was released on PlayStation 4 and Xbox One. Developed by the team at ZeniMax Online Studios, The Elder Scrolls Online merges the unmatched exploration of rich worlds that the franchise is known for with the scale and social aspects of a massively multiplayer online role-playing game. The Elder Scrolls Online features a Buy-to-Play model similar to previous Elder Scrolls titles, where one purchases the game for a flat fee and can play it for free afterwards, but there is also an optional membership program, ESO Plus, which grants bonuses such as increased XP gain and free access to all DLC Packs. Setting Main article: Vestige Alliances Other factions. Elder Scrolls Online. The Elder Scrolls Online (ESO) Maps, Walkthrough & Game Guide. 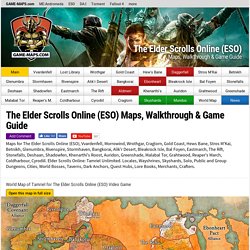