The Aztec Capital City of Tenochtitlan - Aztec Culture. Aztecs and the Aztec Civilization. Aztec Gods and Goddesses - Ancient / Classical History. Huitzilopochtli Huitzilopochtli was the Aztec god of the obsidian knife who sprang forth from his mother's belly to kill his siblings. 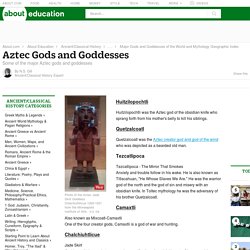 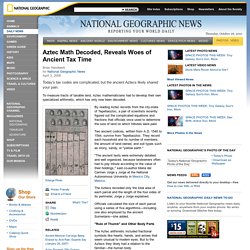 To measure tracts of taxable land, Aztec mathematicians had to develop their own specialized arithmetic, which has only now been decoded. By reading Aztec records from the city-state of Tepetlaoztoc, a pair of scientists recently figured out the complicated equations and fractions that officials once used to determine the size of land on which tributes were paid. Two ancient codices, written from A.D. 1540 to 1544, survive from Tepetlaoztoc. They record each household and its number of members, the amount of land owned, and soil types such as stony, sandy, or "yellow earth. 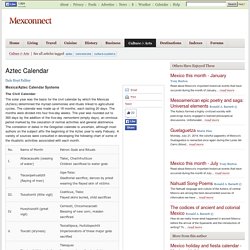 Aztecs (Mexica) During the twelfth century AD the Mexica were a small and obscure tribe searching for a new homeland. 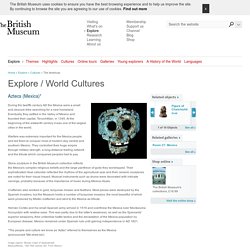 Eventually they settled in the Valley of Mexico and founded their capital, Tenochtitlan, in 1345. At the beginning of the sixteenth century it was one of the largest cities in the world. Warfare was extremely important for the Mexica people and led them to conquer most of modern-day central and southern Mexico. They controlled their huge empire through military strength, a long-distance trading network and the tribute which conquered peoples had to pay.

Stone sculpture in the British Museum collection reflects the Mexica's complex religious beliefs and the large pantheon of gods they worshipped. Craftsmen also worked in gold, turquoise mosaic and feathers. Hernán Cortés and his small Spanish army arrived in 1519 and overthrew the Mexica ruler Moctezuma Xocoyotzin with relative ease. Aztec History. People. Aztecs. The first European to visit Mexican territory was Francisco Hernandez de Cordoba, who arrived in Yucatan from Cuba with three ships and about 100 men in early 1517. 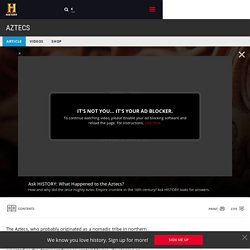 Cordobars reports on his return to Cuba prompted the Spanish governor there, Diego Velasquez, to send a larger force back to Mexico under the command of Hernan Cortes. In March 1519, Cortes landed at the town of Tabasco, where he learned from the natives of the great Aztec civilization, then ruled by Moctezuma (or Montezuma) II. Defying the authority of Velasquez, Cortes founded the city of Veracruz on the southeastern Mexican coast, where he trained his army into a disciplined fighting force. Cortes and some 400 soldiers then marched into Mexico, aided by a native woman known as Malinche, who served as a translator. Thanks to instability within the Aztec empire, Cortes was able to form alliances with other native peoples, notably the Tlascalans, who were then at war with Montezuma.

Aztec Civilization. The Aztec Empire flourished between c. 1345 and 1521 CE and, at its greatest extent, covered most of northern Mesoamerica. 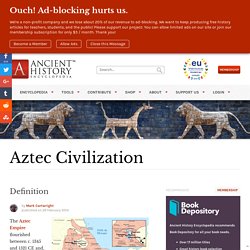 Aztec warriors were able to dominate their neighbouring states and permit rulers such as Motecuhzoma II to impose Aztec ideals and religion across Mexico. Highly accomplished in agriculture and trade, the last of the great Mesoamerican civilizations was also noted for its art and architecture which ranks amongst the finest ever produced on the continent. The Aztec state is actually the most well documented Mesoamerican civilization with sources including archaeology, native books (codices) and lengthy and detailed accounts from their Spanish conquerors - both by military men and Christian clergy. Historical Overview Sometime around 1100 CE the city-states or altepetl which were spread over central Mexico began to compete with each other for local resources and regional dominance.

TenochtitlAn Religion The sun, not surprisingly, had great significance for the Aztecs. Tarlton Law Library - Aztec and Maya Law - online exhibit. The Aztec empire was made up of a series of city-states known as altepetl. 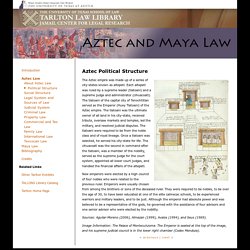 Each altepetl was ruled by a supreme leader (tlatoani) and a supreme judge and administrator (cihuacoatl). BBC Bitesize - KS2 History - The Aztec Empire. The Aztec Civilization. Was the Aztec Empire Really All Powerful? Introduction to the Aztecs exhibition: Melbourne Museum. A pot in the shape of Tláloc, the Aztec rain god. 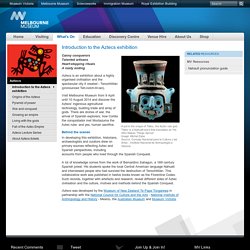 History for Kids: Aztecs, Maya, and Inca. Back to History. 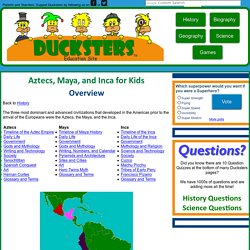